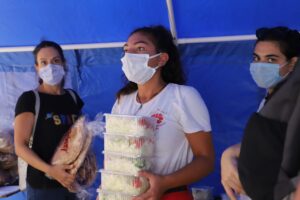 Around 300,000 people were made homeless when twin explosions rocked Beirut on 4th August. They have no food, no place to live. Many need treatment, but unfortunately half the city’s hospitals have been destroyed or seriously damaged. Many are traumatised and need support.

Caritas staff and volunteers have been out on the streets at all hours of the day to accompany communities by offering a smile and some comfort, giving out food and helping provide medical and other services.

Hundreds of young volunteers have given their time and themselves to carry the city of Beirut through the storm. Here are just a few of the young people who have walked side by side with the shattered communities.

Support the work of the volunteers of Caritas Lebanon. 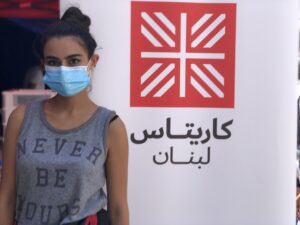 “When the explosion happened, I was visiting my friends in Hamra and the building started shaking all over. We saw the fumes and knew it was an explosion.  It was more than scary,” says Maritta.

After making sure her family were all safe, Maritta, a recent medical school graduate, rushed to the emergency department at the hospital where she works to help. Maritta couldn’t find words to describe what she saw when she first arrived at the hospital.

“I think we saw more than 100 patients,” she says. “Each patient needed the assistance of more than two doctors and three or four nurses. It was so chaotic at the hospital. Medical staff sewed up the wounds of injured people without anaesthesia. We didn’t have time to give an anaesthetic.”

Doctors and nurses cried while trying to focus on their work. All medical staff in the hospital were worried about their families and loved ones and thinking about the houses that they had lost.

“The emergency department was a warzone,” says Maritta.

After a long night at the hospital, Maritta returned  to her house, which had been hit by the explosion. Broken glass was everywhere in the house and almost everything was broken.

“This could not have happened at a worst time. We are in the middle of a pandemic and an economic crisis. The hospitals are devoid of medical supplies due to the shortage of foreign currency and the increased prices. Our hospitals really need medical supplies.”

Maritta joined the Caritas Lebanon medical team as a volunteer on the second day after the explosion, and so far, Maritta and her fellow volunteers have been receiving around 100 patients every day.

The economic crisis has affected every household so badly that people could barely afford their medication for chronic illnesses even before the disaster.

Maritta says, “There is no hope in the Government of Lebanon. The Government is devoid of any money that could help the citizens. They have been saying that the losses due to the disaster have been estimated at 5 billion dollars, and that might be much more. We need every single cent of that money.” 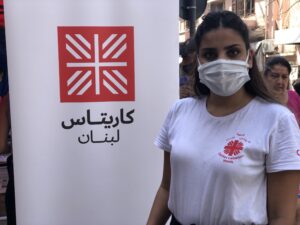 “As a volunteer at Caritas, I have experienced the suffering of the victims. We have slept on the streets to ensure that we respond to all the urgent needs. If you do not sympathise with the sufferers, you can never understand their pain,” says Lauren Khoury.

Lauren started her journey with Caritas Lebanon in January 2020. After the devastating explosion in Beirut’s seaport, she has been distributing food to people in need. “We work 24 hours a day. On some days I must be present on the street (at the food station) for two shifts, day and night.”

Caritas Lebanon was one of the first local organisations to directly support Lebanese citizens. The people of Beirut have lost access to all their needs, says Lauren, speaking of shelter, food, and medicine.

Lauren has described how she travels several miles daily to arrive at Caritas projects. Her mother is sick, and she daily risks her own and her family’s life, especially with COVID-19 cases escalating. When asked about this great sacrifice, all that Lauren could say was that one day she could herself be in the place of the victims.

“Lebanese people, volunteers, and local non-governmental organisations are working collaboratively and non-stop, but this is not enough. People have lost everything they had and can barely support themselves. Therefore, we need external help,” she says

“All I hope is that people receive equal support.” Lauren thanks all the organisations and people providing assistance from outside Lebanon.

The energy of youth and the desire to serve 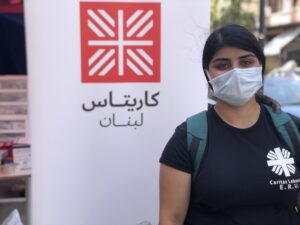 Theresia has been volunteering for Caritas Lebanon Youth Department for almost six years now. Following the explosion that hit Beirut on Tuesday 4th August, Theresia and her fellow volunteers are operating on a rotational basis all day and every day to support the victims of the blast.

Caritas Lebanon put up two tents in the  severely damaged areas hit by the massive shockwave  from the explosion.

The young frontliners are working non-stop; removing rubble and debris in around 75 houses every day, in addition to providing food, water, medicines and first aid for those who need it the most.

Theresia says, “People are asking for support in renovating their houses. We as Caritas Lebanon will be offering these services in the second stage of our response. What we are providing now is temporary shelter for the victims whose houses are in an extremely bad condition.”

Theresia believes that the needs of people are immense and cannot be met without the support of kind donors from abroad.

“We are very thankful for any kind of support that we receive from outside Lebanon. As you know, we do not have a functional government. We are really in need. The government is not present despite all the needs that arose following the explosion. We need a lot of support to be able to overcome the impact of this shock,” she says.