Caritas in Colombia helped plan and rebuild a river port in the Catatumbo region, near Venezuela. Rebuilding the port contributed to efforts to link up communities in a zone previously at the mercy of rebel and paramilitary activity.

The Colombian government and FARC rebels signed an historic peace agreement in 2016 following decades of civil war. More than 200,000 people died and millions were forced from their homes in the long-running conflict which started in the 1960s.

In spite of a still complex situation in the country where tension is high and killings and violence against social leaders are rising, the path to peace continues. For the Church in Colombia, the construction of peace and reconciliation is the missionary path which underpins all of its work.

Caritas Colombia has ploughed its energy into bringing peace, understanding and reconciliation to communities across the country for many years. Its strategy is based on the social transformation of conflicts, the reconstruction of the social fabric, community development in conflict-affected areas and prevention of new conflicts. By promoting listening, dialogue and the recognition of human dignity and rights at the grassroots level, Caritas Colombia builds bridges of forgiveness. These efforts contribute to peace on a national level. 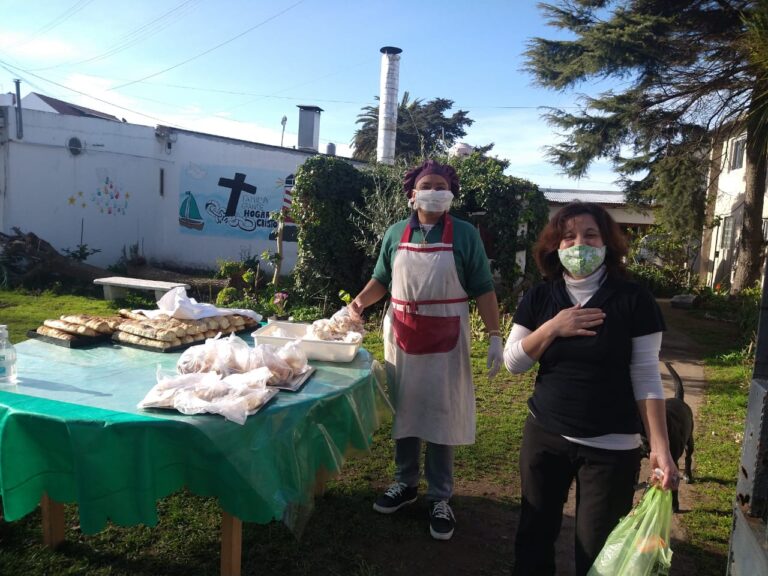 Women who have benefitted from Caritas’s skills building activities.

An example of the work for peace building in Colombia is in La Angalia, in the Catatumbo region near the Venezuelan border.  It was a thriving river-side community until a 2001 massacre, after which the paramilitaries took over. At the time, the paramilitaries stole and set fire to everything and the community members, gripped by fear, fled to safer places. For a number of years, it was like a ghost community as people fled because of the conflict.

Years later, when the paramilitaries were demobilised, people started to return to their homes in La Angalia. The local Caritas (Pastoral Social) has helped strengthen infrastructure and promote the reintegration of former members of the FARC rebel group.

Caritas lobbied for the rebuilding of the river port as it was key to developing dialogue in communities on both sides of the river. Caritas helped formulate the proposal for the port and define the rules for the proper use of the port. They supported and trained community leaders to ensure that the project could be driven forward by the people in the community.  They knew that only those who lived in the community could understand the needs and sensitivities in the area.

The building of the port is an example of how physical infrastructure, that gives communities greater mobility and access from the outside, can become a cornerstone of community dialogue and promote peace and reconciliation.

There has been particular focus on reintegrating women combatants into the community with training in skills such as sewing and peace building and by giving psychosocial support. Their skills aim to benefit the whole of the community. At this time of the COVID-19 pandemic, the women trained by Caritas are making protective face masks. Caritas also gives community members the skills to advocate to local authorities on peacebuilding.

As Pope Francis wrote in his message for the Vatican’s World Day of Peace (1st January 2020), “The world does not need empty words but convinced witnesses, peacemakers who are open to a dialogue that rejects exclusion or manipulation […] Peace “must be built up continually”; it is a journey made together in constant pursuit of the common good, truthfulness and respect for law. Listening to one another can lead to mutual understanding and esteem, and even to seeing in an enemy the face of a brother or sister.”