Caritas Bangladesh raises alarm about the safety of the Rohinyga in view of the monsoon season. Less than a month after a huge fire ravaged the world’s largest refugee camp, killing 15 people and destroying the shelters and property of more than 48,000 people (10,176 families), there is a need to provide shelter for the people housed in the camp.

Some 10,000 other structures including latrines, health facilities, community facilities and mosques were damaged by the fire which has created an urgent need for food, emergency shelter, water and sanitation and protection-related support for 92,000 people who were affected overall.

“It’s a race against time to help people build shelters strong enough to withstand the howling winds and driving rains that will arrive within the next few days. This is the biggest fire ever in a Rohingya camp and the complex situation is changing rapidly,” says Inmanuel Chayan Biswas, spokesperson for Caritas Bangladesh’s Rohingya programme.

Around 1.1 million Rohingya refugees are now in camps in Bangladesh. The upcoming monsoon season brings with it the risk of floods and landslides which will damage weak shelters, wash away paths, damage sanitation systems and threaten the Rohingya’s fragile existence. The meteorological threat will add to the difficulties faced by the Rohingya population who have repeatedly faced life and death situations both in Myanmar and in the camps for a number of years. 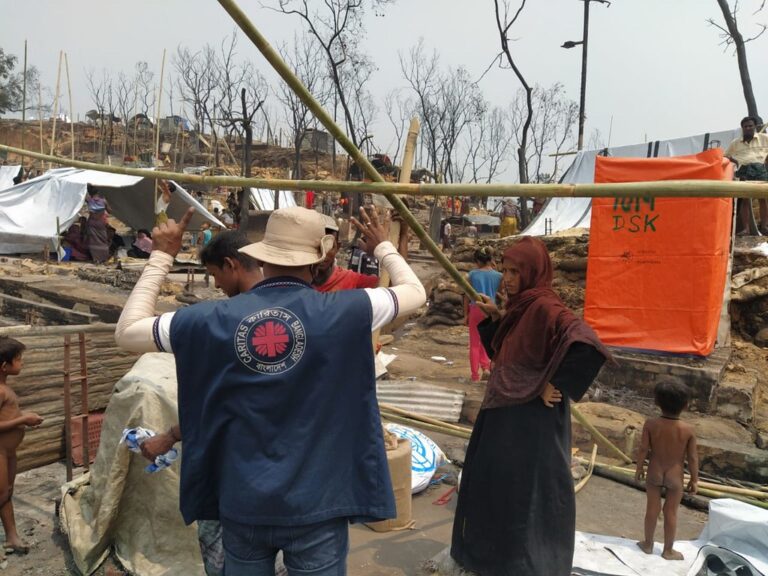 “Caritas, along with the International Organization for Migration, has been helping rebuild makeshift shelters immediately after the fire. We have so far helped almost 650 families build shelters with the necessary technical support and have provided the necessary materials to ensure immediate access to water and sanitation.”

Mr Biswas says that the ferocity and extent of the March fire and the increasing occurrence of fires in the camps have strained relationships with the nearby Bangladeshi host population and undone much of the work to bring them together with the Rohingya community.

He says a long-term solution to the temporary existence of the Rohingya is key: “Bangladesh, as a developing country, can’t do this alone unless the international community comes forward with the political support necessary for starting a peaceful repatriation process. As the repatriation process delays, the suffering of the Rohingya is increasing.”

Since September 2017, an average of 300,000 Rohinyga refugees have been reached every year by the programmes Caritas runs in camps to help those who have fled persecution in Myanmar to take refuge in Bangladesh. Beyond providing shelter and water and sanitation, Caritas provides non-food item support, educational activities, disaster risk reduction programmes, cash-for-work programmes and protection activities to ensure the safety of women and children.

Mr Biswas says the biggest impact of the fire in the Kutupalong mega-camp is on the mental state of women and children. Their safety has been compromised as they’ve been living in makeshift homes since the fire. The already vulnerable population is now facing existing trauma from their refugee experience plus the anguish of other fires breaking out.

“My family lost everything due to the fire. We don’t feel safe at all inside the camp, especially at night,” says Minuara Begum, who has received support from Caritas, like other 125 families from the host community living inside the camp.

“With the cash support which I received today, I will purchase a tarpaulin and other items that will help us repair our shelter so we can live in it.”

Mr Biswas says that the COVID-19 pandemic and recurrent lockdowns announced by the Bangladeshi government means severe restrictions are put on camp activities and the movement of staff. Cases are rising at an alarming rate in Bangladesh and the conditions of instability and over-crowding in the camps increase the risk of infection.