The work of the Caritas Romania Confederation originated soon after the revolution in 1989. Its aim was to coordinate the distribution of aid sent from abroad to respond to the plight of the poor and vulnerable people. However, it wasn’t until 5 years later in 1994 that Caritas Romania Confederation became officially recognized and today the scope and scale of their work has developed to respond to the more complex social problems afflicting Romania.

The Confederation has been created in order to promote its members social projects and contribute to lobby actions that could influence social policies both on the national and international level. All Caritas organisations in Romania have partnerships with local authorities and provide social assistance to disadvantaged children at risk, people with special needs, the elderly and low-income families.

Within the first days after a natural disaster strikes, Caritas Romania Confederation is among the first organisations to dispatch an on-site emergency team to the disaster area to quickly carry out the deployment of emergency relief: such as distributing food packages, basic hygiene materials, blankets, clothing and other necessities.

In 2005, the worst floods in 50 years hit Romania, destroying hundreds of houses and leaving thousands of people homeless and desperate for aid. Caritas Romania Confederation coordinated relief efforts to dispense food, medicine and tents to the victims.

Once the primary needs are provided, Caritas Romania Confederation develops long-term support and prevention programmes for the affected communities.

Caritas Romania Confederation created the National Home Care Program to offer basic services, in the form of food, means of transportation and housekeeping, to improve the lives and meet the basic needs of people who are bedridden. This programme comprises a team of doctors, nurses, social workers and volunteers to provide medical services and psychosocial support. Since July 2013, Caritas Romania Confederation along with its partners are developing a wide national homecare network, named “Seniorinet”.

Caritas Romania Confederation addresses the nation’s growing elderly population with social campaigns for seniors that want to remain active despite the problems associated with old age. In 2012, they organised a campaign to inform and motivate target groups the issues of active ageing and solidarity between generations. During the year, Caritas organisations offered support and dedicated programmes to 15,500 seniors.

Since 2005 Caritas Romania Confederation organises along with its member organisations the national event “One million stars” that aims to sensitize the public opinion upon the problems that the most vulnerable social groups face: extreme poverty, social exclusion, discrimination. Each year the candles of solidarity burn in at least 30 big cities and localities in Romania.

Caritas Romania Confederation main office in Bucharest provides support to the 10 Caritas diocesan offices throughout Romania. The Caritas Romania network of organisations employs 1200 staff and 1100 volunteers to carry out the agency’s services to 115,000 beneficiaries every year.

Our complex projects require national and international involvement to implement cooperation policies for humanitarian assistance and develop advocacy strategies in European policies and regional cooperation programs. As a result, Caritas Confederation is part of several national and international networks: Caritas Internationalis, Caritas Europa, FOND. Their activity would not be possible without the local and external donors’ contribution, the public local partnerships, the support of the Church and the contribution of private companies. 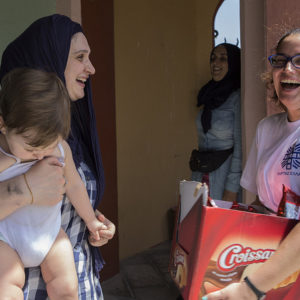 Caritas staff from around the world are in Greece to help organise local volunteers to provide aid to refugees in the best way possible. 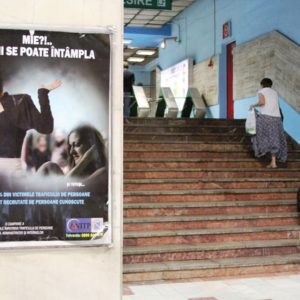 Adrian’s is a success story for ADPARE, a group that works with Caritas and other charities to help trafficking survivors begin again. After a lot of counselling with ADPARE and a lot of hard work at school, Adrian is adjusting well to his new life and is excelling in his classes.