Kasai: Time to break the silence

Conflict has devastated the Kasai region of the Democratic Republic of Congo. It has left behind a complex humanitarian crisis.

Without aid, many vulnerable people will simply not survive the hardships they face. “This is a truly disastrous humanitarian emergency,” says Jean-Pierre Pokavu of Caritas Congo. “The needs are enormous.”

Caritas has launched an emergency appeal for the war-affected population, and is already at work distributing food, essential household supplies, hygiene kits. Caritas agencies continue with their long-term support to the region.

Pope Francis has called for a day of fasting and prayer for peace for Congo and South Sudan. The UN has given Kasai its highest emergency rating.

It’s time to break the silence.

Time is running out for 3 million people in Kasai. Caritas appeals for urgent aid. 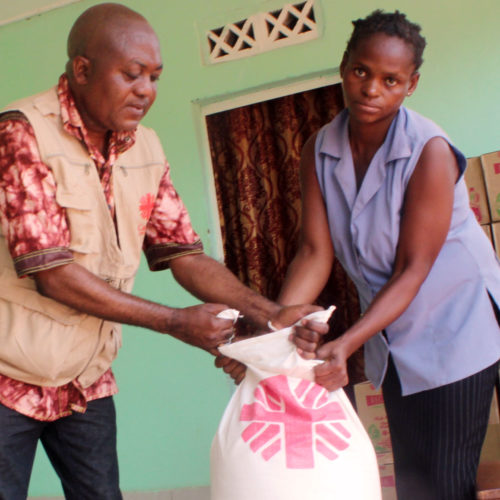 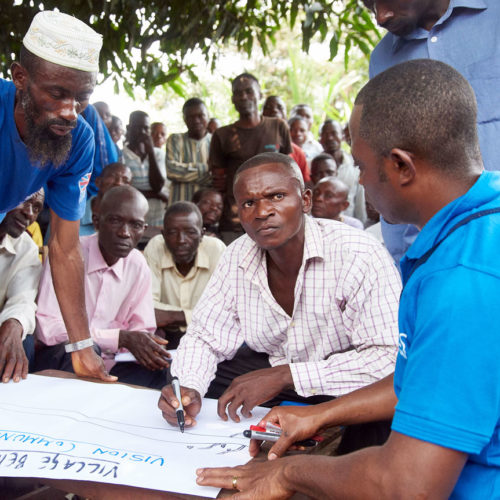 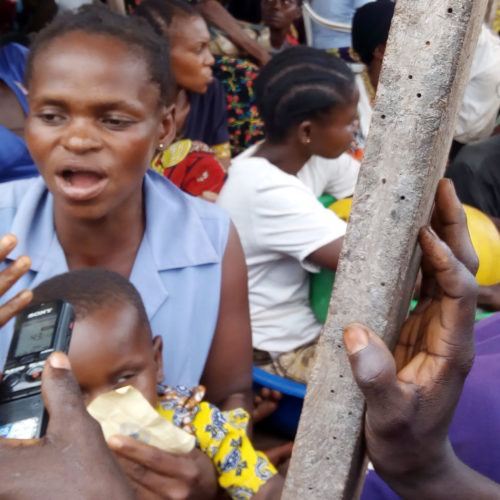 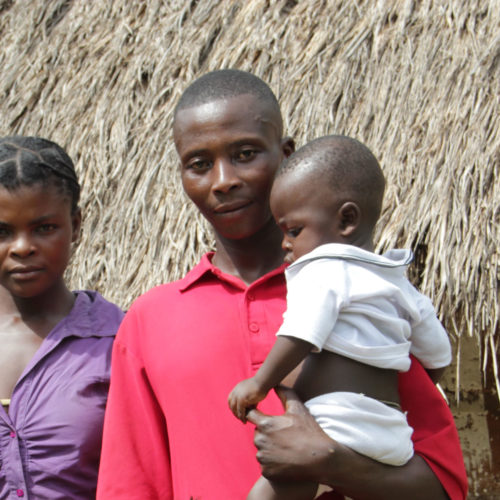 “I feel such sorrow.” 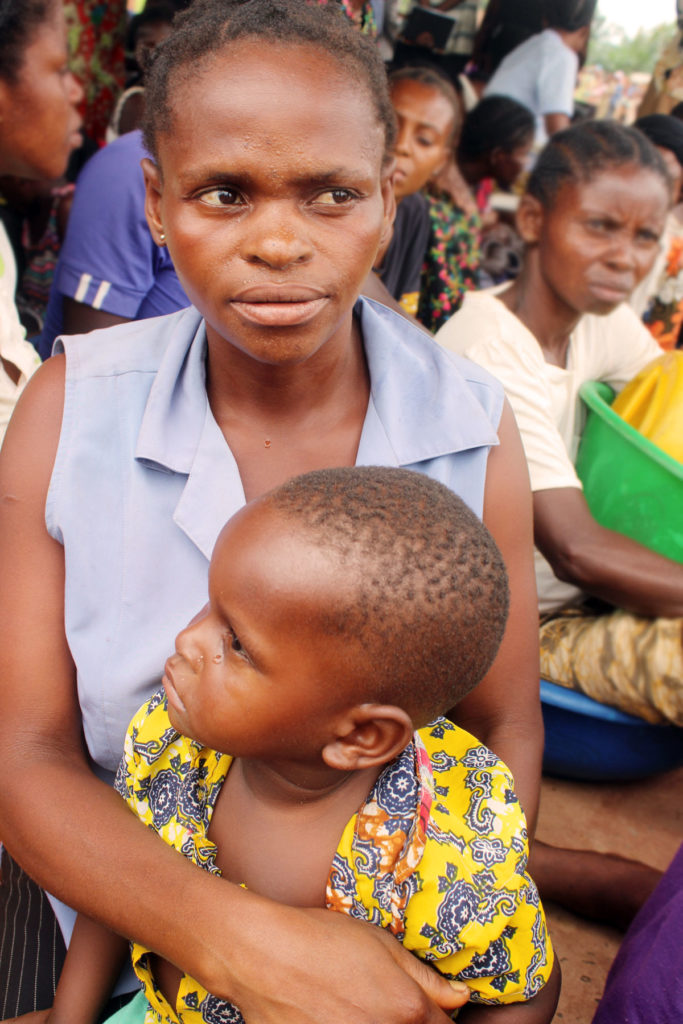 Denise Ndekenya and her son. Photo by Guy Marin/Caritas Congo

“I had five children and my husband,” mourns widow Denise Ndekenya. “Now I only have two children left ….” Militia attacked Denise’s village last April and killed her family. Her husband was decapitated.

Denise was in hospital at the time with two of her children. Warned by neighbours what had happened, instead of returning home she set off on a long, dangerous journey through the bush with her children. Finally she arrived at St Augustine’s parish near Tshikapa, where she is being helped by Caritas.

“What am I going to do now?” asks Denise. “I feel such sorrow.” It is a sentiment shared by too many.

In 2017, nearly one and a half million people fled their homes in the Kasai region of DRC, as a murderous conflict between local militia Kamuina Nsapu and the Congolese army dragged civilians into its vortex.

The five provinces of Kasai are usually stable, unlike the notorious eastern side of DRC where violence has ruled for decades. The human cost in Kasai has been tremendous, with at least 3,000 deaths and 87 mass graves recorded. Maiming, killing, sexual violence and forced recruitment of children are rife. Between 40-60% of the militia are children aged 8-18. 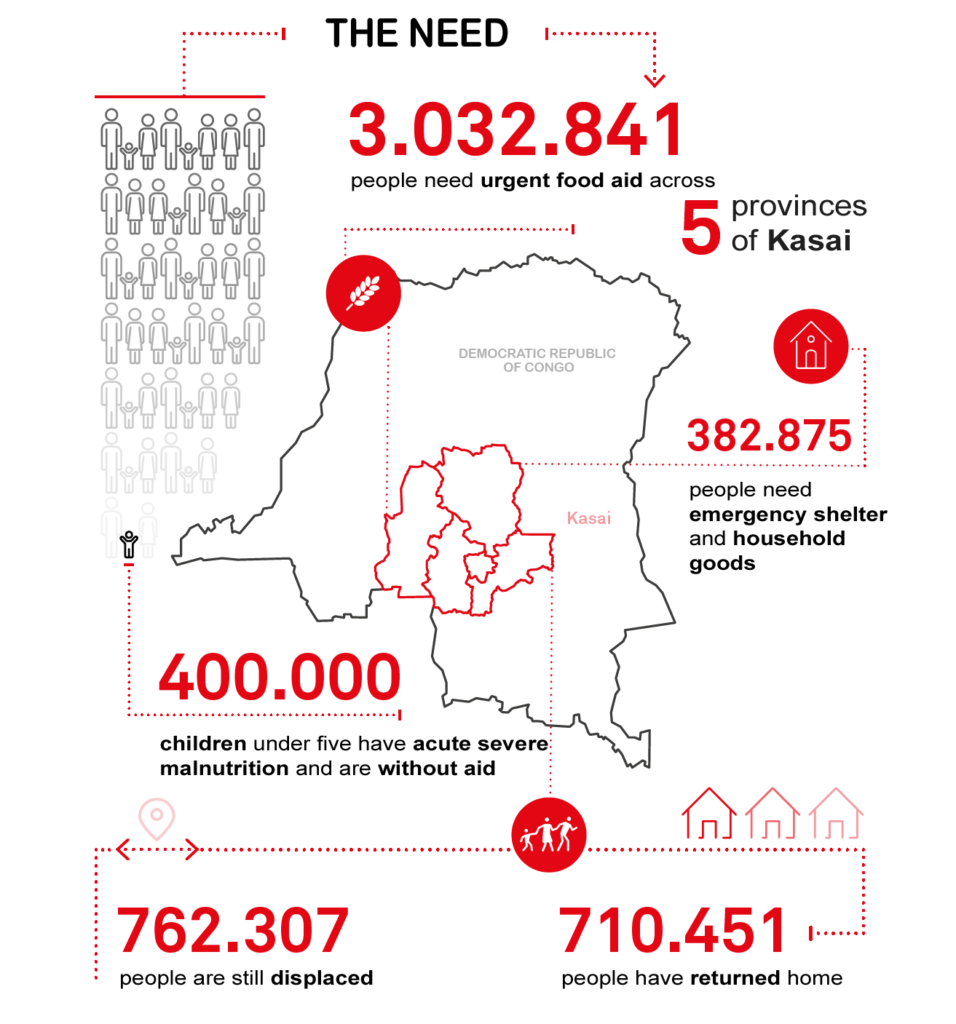 “They have lost absolutely everything.”

All this takes place against a dire backdrop for Congo as a whole. The situation of poverty, civil war and corruption significantly worsened in 2017; an estimated 13 million people will be in urgent need of aid this year. The country is locked in political crisis, awaiting elections that are repeatedly delayed by President Joseph Kabila. 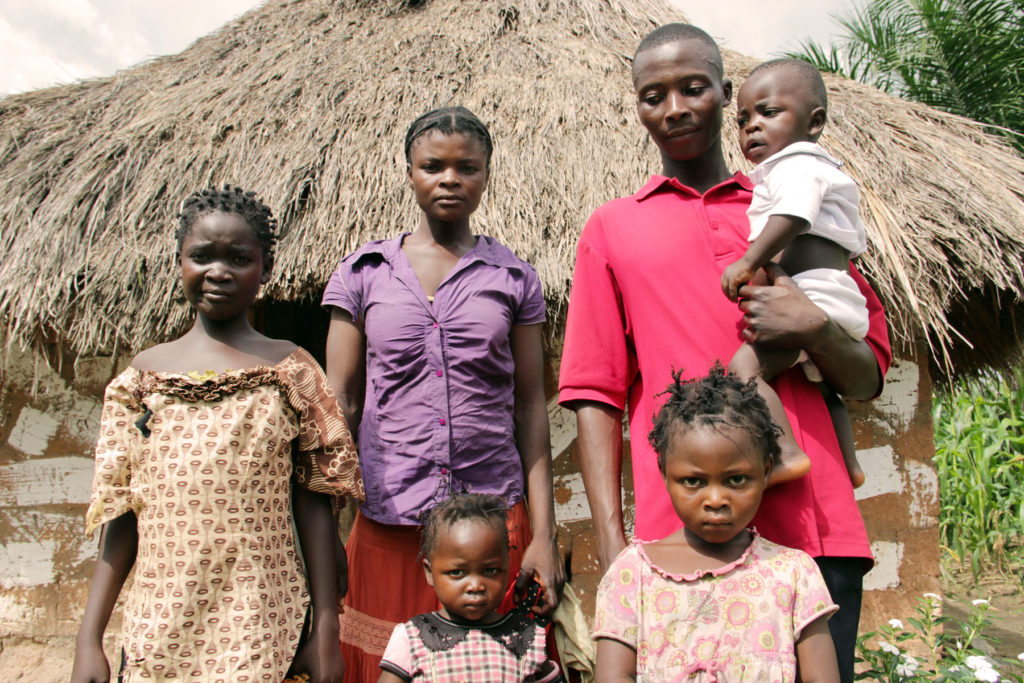 Richard and his family have lost everything. Photo by Caritas Belgium.

Today there is relative stability in Kasai and many displaced people are returning home. But to what?

“They have lost absolutely everything,” declares Juliette Maquart of Caritas Belgium. “Their homes don’t exist anymore, they have been looted and burned, along with clinics and schools.”

With longstanding networks throughout the country, Caritas and the Catholic Church are uniquely placed to reach the people of Kasai.

“We had to leave our village…It was a battleground. We took refuge in the bush. We left without taking anything – our livestock, our property, everything was left behind.” – Richard, a survivor from Kapangu

“The Catholic Church is present in every Congolese village,” explains Abbé Donatien Nshole, spokesperson for the Congolese Bishops’ Conference. “So we have access to areas not covered by the UN.”

Longstanding partnerships with local organisations have allowed Caritas to play a leading role in responding to the crisis. From saving lives via sms, to providing start-up household kits, Caritas is mobilising its international and national networks to help rebuild Kasai.

“No pots and pans, nothing to eat. Thank God this help from Caritas arrived just in time.” – Denise Ndekenya 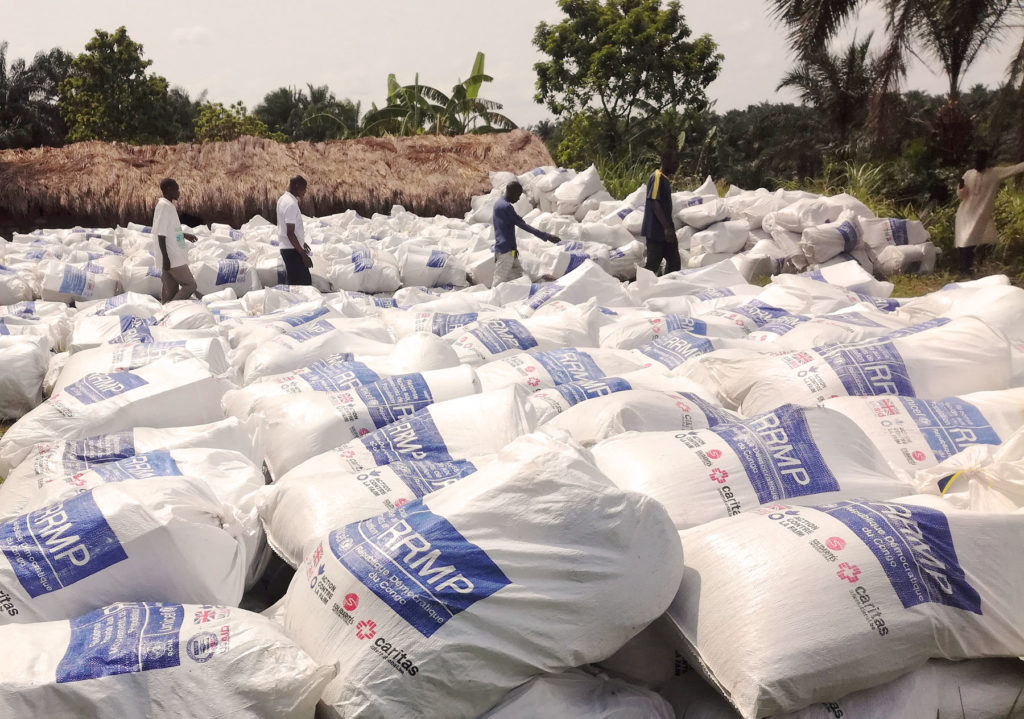 Urgent basic needs of returnees, displaced people and their host families are being met by CRS (Caritas USA), who are working to reach 258,000 people with cash grants, essential household items and food. Special priority is being given to families headed up by women, when so many have lost husbands to the conflict. This is one of several emergency programmes currently being run by Caritas members right across the Kasai region.

“We will go on striving to help our population,” says Fr Pierre Mulumba, coordinator for Caritas Luebo, who delivered emergency food and household start-up kits to 3,600 vulnerable people (600 families) in Tshikapa in February, in the same project that is helping widow Denise Ndekenya.

Many of these families are led by widowed mothers like Denise, who have been living in the bush for many months and have nothing at all. In her words: “No pots and pans, nothing to eat. Thank God this help from Caritas arrived just in time.” 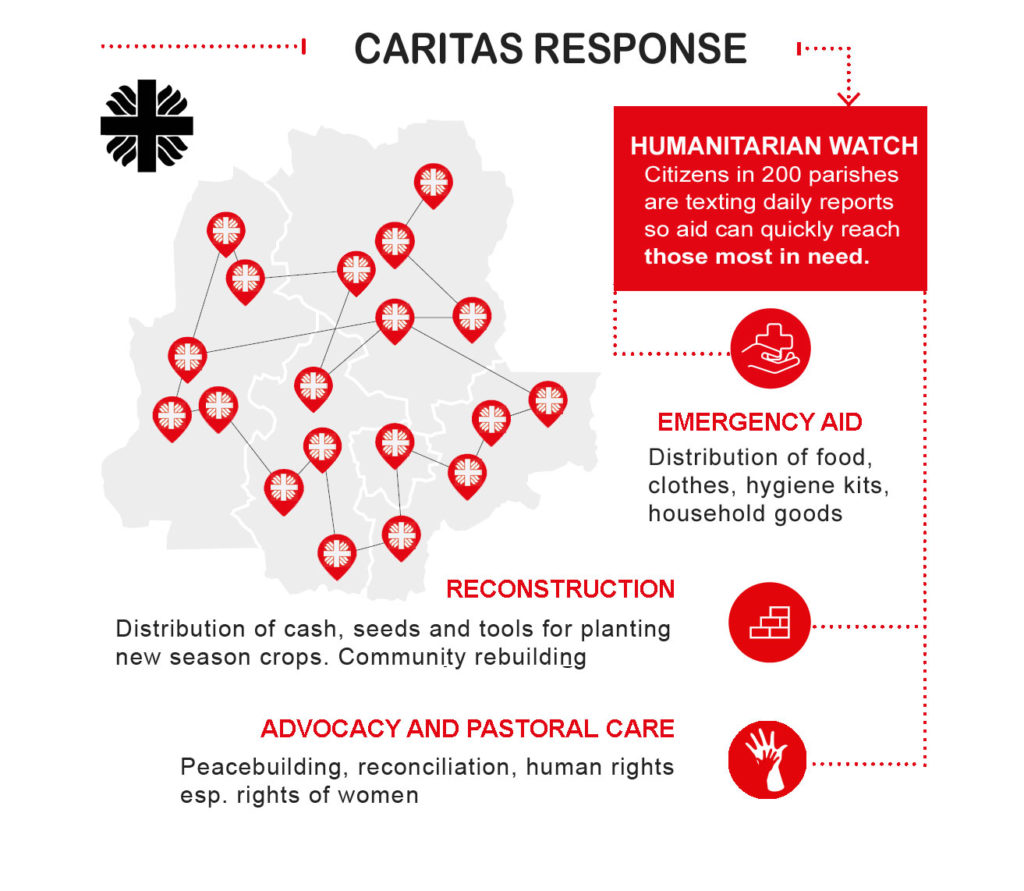 The war-affected communities of Kasai need long-term help to rebuild their homes, plant crops, to reconcile their divisions and heal their traumas. Children need a healthy diet, clean water to drink and  protection from disease.

CRS (Caritas USA) have a five-year programme that will reach over a million people across Kasai Central and Eastern Kasai. This aims to improve people’s food supply and their dietary range, provide clean water and sanitation and boost their family economy. 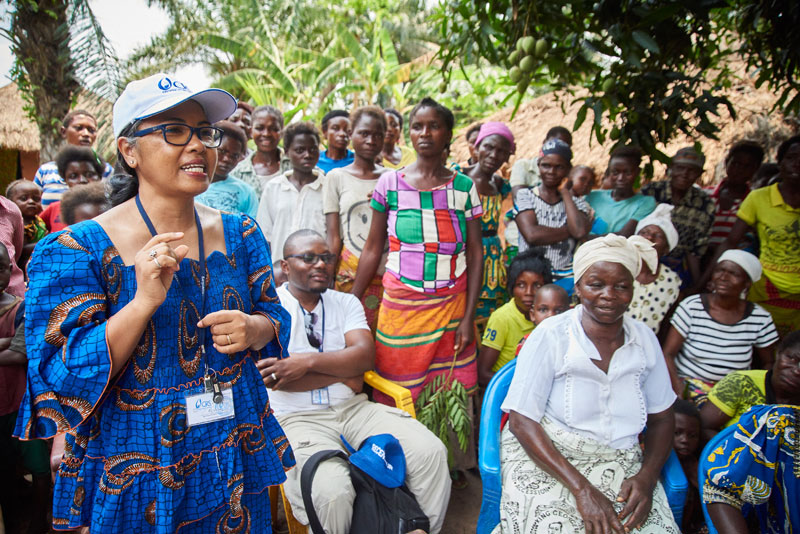 “It calls for a lot of courage.” – Theodore Kazadi, Caritas Belgium

Much of this household welfare depends on the women of Kasai, who need support on many levels to start over. They have been worst affected by war, yet they are the mainstay of the precarious family economy.

“Agricultural production is entirely in the hands of women,” says Jean Ambela of CRS. “Yet these same women have been excluded from all development programmes.”

Caritas is helping women in Kasai become literate, and train as leaders within their communities so that their rights can be recognised and their voice heard in community decision-making. But in this traditionally male-dominated society, there is a long way to go.

“It is a question of changing attitudes,” says Theodore Kazadi of Caritas Belgium. “It calls for a lot of courage.” 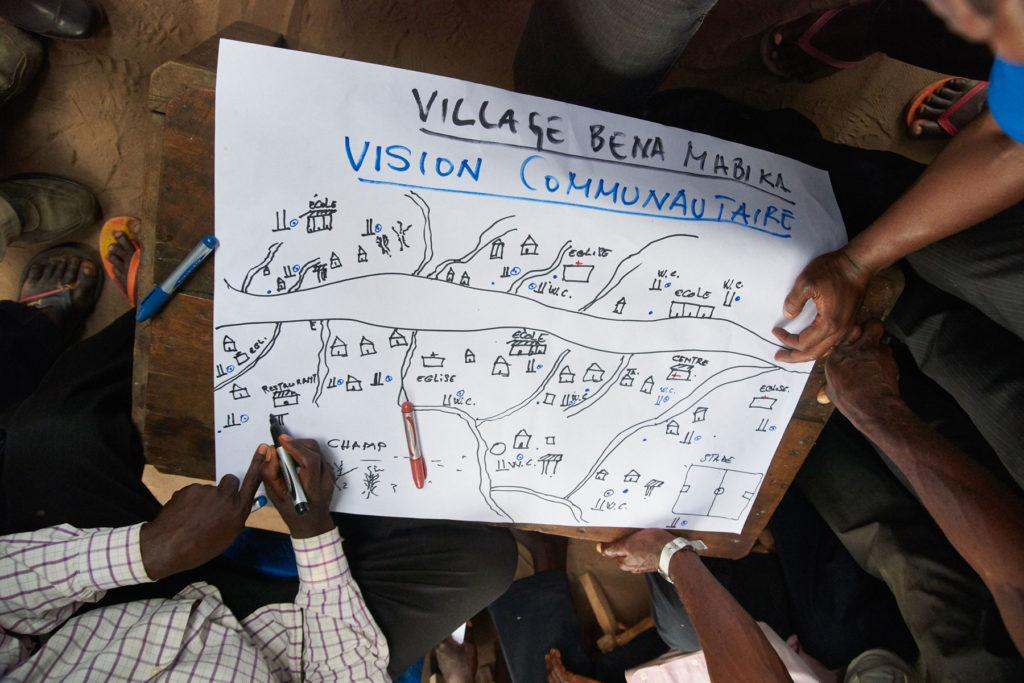 The Church’s voice for peace

Peace and reconciliation are what the people of Kasai, and the whole country, desperately need: peace to plant their fields, to rebuild their homes, to raise their children in safety.

“The people have been wounded, crushed,” says Mgr Marcel Utembi, archbishop of Kisangani and President of the Congolese Bishops’ Conference. “They have experienced depression and trauma; now they need to be accompanied.”

On the national stage, the Catholic Church is playing a critical role in urging the cause of democracy and peace, and is a powerful advocate for the Congolese people. Half of the population of Congo is Catholic.

“The Congolese Bishops’ Conference is in a race to pull the country back from a looming catastrophic political and humanitarian crisis,” says Fergus Conmee of CAFOD.

But the Kamuina Nsapu militia is waging war on the Church, desecrating and destroying churches, convents and health clinics. The situation is very fragile. Everything depends on finding a road to peace.

Caritas and the Church are facing this challenge alongside the people of Kasai. As Mgr Félicien Mwanama, bishop of Kasai Central, says: “We can help the people regain faith in themselves, by reconciling with one another … The Church is already doing its work.”

“Before God, let us ask ourselves, ‘What can I do for peace?’”

How can I help?

GIVE: DONATE TO OUR APPEAL
ACT: BREAK THE SILENCE
PRAY FOR THE PEOPLE OF DRC

13/02/2018 Africa, Conflicts and Disasters, Congo, Democratic Republic of, Emergencies, Emergencies in Congo by Myra Soetandyo
Prev
Next
This website uses cookies to improve your experience. We'll assume you're ok with this, but you can opt-out if you wish.Accept Read More
Privacy & Cookies Policy
Necessary Always Enabled