From despair to hope in Cambodia 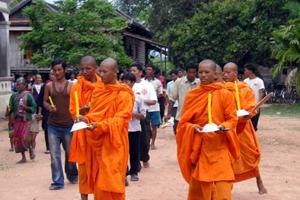 When Caritas Cambodia found Kim Haeng in a shack in Siam Reap she was living more like an animal than a person. The 20 year-old was skeletal unwashed, eating food from the floor, and unable to speak.

Her parents died when she was five and a relative sold her to a brothel. She was a sex worker for 15 years until she became too ill to work and the brothel owner turned her out with nothing.

Caritas staff first thought she had suffered such trauma that she had withdrawn from the world forever. But they did not give up hope.

She received anti-AIDS therapy and her health started to return. She got counselling. It was a long road, with relapses including a return to prostitution, but she broke out of her psychological prison.

Now a beautiful confident young woman, she is an active volunteer, speaking out in the community for those people living with HIV.

Cambodia is the region’s poorest country, with a shattered infrastructure and the legacy of Pol Pot’s Killing Fields. A few years ago, the country was facing a major health crisis with a rising new infection rate of HIV.

Good policies on prevention, treatment and care have brought about an amazing transformation, with new infection rates down though not eliminated.

Cambodia is a focus country of a UN initiative to make free drugs available, paid out of the Global Fund to Fight Aids, Tuberculosis, and Malaria. Access for those who needed the medicine has increased from a fraction to over half today.

“The impact has been dramatic,” said Bernadette Glisse, HIV Coordinator for Caritas in Siem Reap. Caritas works with people living with HIV, providing food, income support, counselling and making sure they get access to the medicine they need at the government hospitals.

“Before, we were just doing palliative care,” she said, “Now many more people are receiving the anti-AIDS drugs. From their beds, they’re back on their feet and back to work.”

The country has shown what is possible, but its success depends on the outside world picking up the bill. AIDS drugs can increase life expectancy by decades, so the treatment will have to be funded for decades too.