How Caritas is helping vulnerable Venezuelans with food and health care during the current economic crisis.

The current Venezuela crisis is affecting millions of people.

Galloping inflation has created an economic free fall that has decimated spending power, employment, and future opportunities. Economic migration is on its way to surpassing the Syrian refugee crisis. People are having to make tough choices about what to buy and whether they should migrate to look for work.

“It broke my heart to have to put them to bed with only a glass of water.”

“I feel like a beggar going back to the seminary to eat.”

The Venezuela crisis in numbers

This is roughly 10 percent of the Venezuelan population (figure from Consultores 21).

This rate of inflation between May 2017 and May 2018 has created an economic crisis affecting spending power and employment opportunities.

Because they can’t afford enough food, the average Venezuelan has lost more than 10kg in the last year

Left behind: trying to survive in Venezuela

In Venezuela today the economic crisis is so bad that many people have left the country.

Professionals and youth are leaving en masse, leaving behind a country made up of the most vulnerable people — children and the elderly. Each departure rips apart communities and families.

These are the stories of those left behind.

85 year old María Teresa has no money for medicine

Mother of 9, María Teresa Jimenez, 85, raised her children on a seamstress salary. Five of her children and nine of her grandchildren left Venezuela as a result of the crisis. She says:

“When my children were growing up we wanted for nothing. I worked for 38 years as a seamstress, and it went very well. Now we don’t even have money for medicine. Just to buy pain reliever costs 11 million bolivares (equivalent to two months wages of the minimum salary).”

More than an estimated 1 million Venezuelans have left the country in the past two years alone. “It makes me want to cry,” says  María. “Fortunately, I didn’t have my children now, I had them at a time when they could succeed.”

The national flower of Venezuela, an orchid, has been flowering for six months in her garden. They usually only bloom one month a year.

“God sends us signs of hope,” she says of the orchid. “I’m happy that my children are in a place where they don’t face danger. I wish I were 20 years younger so I could go with them.”

Father Cristobal’s parish is left with no choir

Barefoot Carmelite Priest Father Cristobal Dominguez has seen a mass exodus of youth from his parish as a result of economic migration.

From January to July 2018 a total of 17 Youth Ministry members migrated. In the photo he holds, more than half of the people pictured have already migrated with others planning to do so soon. Fr. Cristobal says:

“It’s lamentable that many of the youth feel that this country doesn’t offer them growth opportunities.”

“We suffered the loss of the entire parish choir, which was made up of young adults who migrated last December. We’re now trying to form a new choir, but the topic of conversation is always about what other countries they can go to, which one offers more opportunities.”

Fr. Cristobal’s parish works closely with Caritas Venezuela to give people hope and provide nutritional support for those in need. Each week his parish serves more than 500 people with the “olla comunitaria,” (the communal pot). He recently started a second feeding on Fridays for the teachers, staff, and their families, at the Church school.

He fears that come next school year, many of the teachers will join the diaspora.

Grandparents taking on the role of parents

A month a go Maribel Pérez’s daughter went to seek work in Colombia. Now she looks after her three granddaughters, Naile, 12, Naiberli, 7 and Naire, 13.

“She’d been looking for work for over two years and nothing,” says Maribel. “I told her to take advantage of the fact I still have the strength to look after them.”

“It’s hard on the girls. They’ve had birthdays, graduations and their mom isn’t there.”

“But when she calls they just tell her not to worry that they are fine and love her very much.”

Maribel says its a struggle to keep her granddaughters fed. One of the girls is asthmatic, and she doesn’t have the means to buy an inhaler on her retirement pension.

School enrollment is approaching, and Maribel isn’t sure she can afford the ID photos required. If she doesn’t get the images taken the girls won’t be able to go to school.

Forced out by the cost of living

Dr. María Alarcón and Jesús Rodríguez have a daughter who is now working towards a doctoral degree in anthropology in Mexico. “She was working here, but she didn’t even earn enough to buy a piece of candy,” says her mother.

“Young professionals here have to emigrate to have a future. The middle class no longer exists in Venezuela. The hospitals are being left without specialists”

The couple volunteers for Caritas Venezuela. María provides medical care and Jesús assists with the weekly soup kitchen that serves over 500 people.

Magaly Henriquez, 58, is the mother of five children. Her two youngest emigrated to Peru.

“It is really painful,” says Magaly of their departure. “My son had so many dreams. He left because of the security problems and economic instability. My daughter was working two jobs, and that wasn’t enough for her to survive here.”

“I grew up in a free Venezuela. We didn’t have these limitations with money. We had what we needed to live.”

How you can help with the Venezuela crisis

Caritas is helping the children and old people left behind by this crisis. We are providing food and health care for the most vulnerable.
DONATE TO OUR VENEZUELA APPEAL

Venezuela food crisis: children on the brink of malnutrition

Yusmarely lives with her three children in Venezuela. Galloping inflation has decimated Venezuelan spending power and Yusmarely is struggling to feed her family well.

Each day the prices inch up. What she pays for a kilo of eggs today might double in price only a few days later.

Like most mothers across Venezuela, Yusmarely is forced to juggle meals, strategically deciding when to feed her children so they feel the least amount of hunger.

The waistlines of the entire family shrank and Yusmarely became worried about her children’s health. Her six-year old, Grendimar, became so thin she would cry and sleep throughout the day. “She was so thin you couldn’t even see her in the bed,” says Yusmarely. “When I bathed her she was all bones.”

Watch this video to see how Caritas Venezuela has helped Grendimar and her brother Greivis to avoid malnutrition and start regaining and healthy weight. 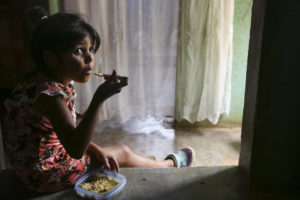 “The pain a mother feels when she does everything she can to feed her children and comes up empty. Months ago I had nothing to give them. It broke my heart to have to put them to bed with only a glass of water.”

“What Caritas has done is incredible. They have helped pull so many children from malnutrition. I feel such joy when I see her with so much energy. Every day she weighs more.”

DONATE TO OUR VENEZUELA APPEAL

The impacts of the Venezuela crisis are far-reaching. High inflation means it’s difficult for people to buy food, medicines and even soap.

This had led to an increase in hunger and illnesses, especially among children. Common illnesses which could have been treated with home remedies can develop into life-threatening problems because people’s defenses are weakened by under-nutrition. 14 percent of children under 5 monitored by Caritas Venezuela are showing signs of acute malnutrition.

This is a time when doctors are needed more than ever. But healthcare staff, including over 20 percent of doctors, have joined the exodus of Venezuelans leaving the nation.

However, 20,000 new Caritas Venezuela volunteers are stepping into the breach. They have joined what Caritas Venezuela director Janeth Marquez calls an “opportunity to save the lives of 300,000 children.” They are providing food, health care advice and nutrition supplements. Here are stories about just three of these inspirational volunteers. 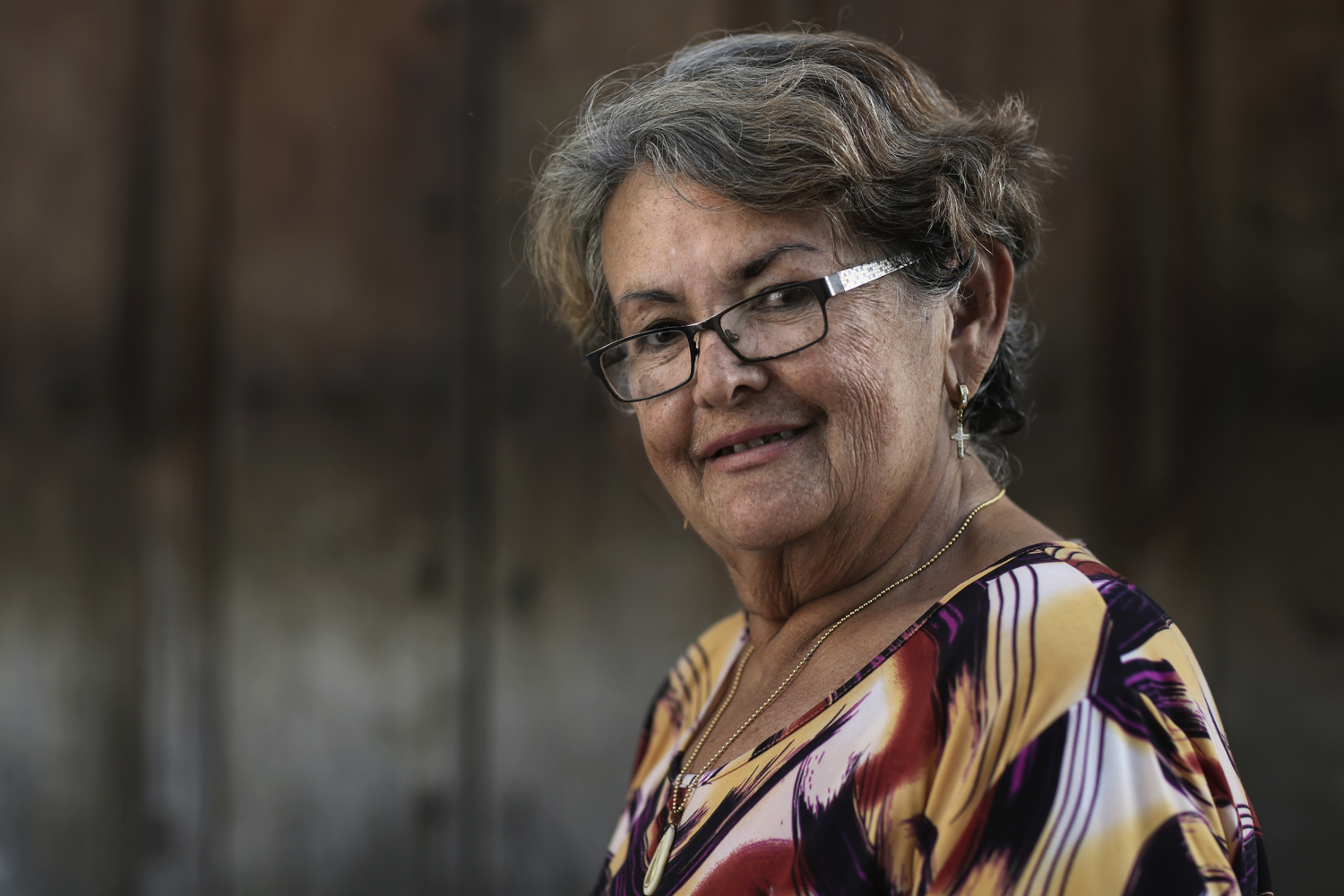 Putting the brakes on undernutrition

In each child she sees at the clinic, volunteer Dr. Luisa Carlotta Castillo sees the reflection of her 15 nieces, nephews, and grand-nephews, many of whom now form part of the Venezuelan diaspora.

She measures the height, weight, and arm circumferences of children and babies who are brought to see her. Many will be suffering from under-nutrition.

But Dr. Castillo is pleased to be able to help parents and carers tackle this problem by providing them with sachets of strawberry-flavoured nutrition powder .

She says, “We’re helping to put the brakes on and even reversing under-nutrition. If we can improve the outlook for these children who otherwise might face cognitive impairment that can affect their ability to earn their daily bread in the future, we can reverse the long-term impact of the hunger we’re facing.”

Dr. Castillo coos over the babies and congratulates the mothers saying, “Even a 500-gram weight gain in a short period of time is significant.” 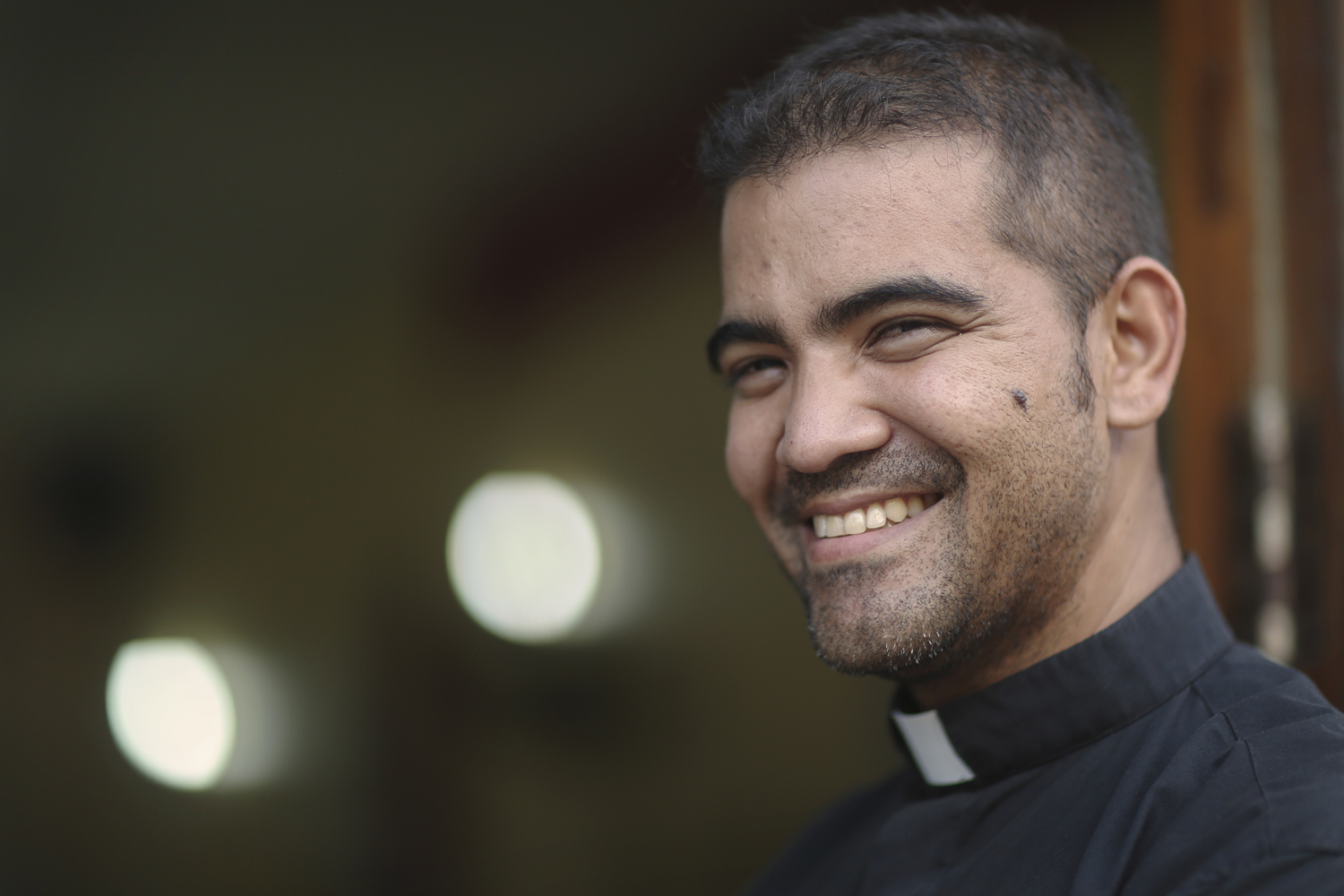 Providing food, and hope, to the most vulnerable

Fr. Alvaro is a parish priest and director of a diocesan Caritas chapter in Punta de Mulato. He has seen the crisis in Venezuela cause problems across his diocese.

“It is very painful to witness people’s suffering,” he says. “The rate of inflation is overwhelming. It’s asphyxiating.”

In order to help, Fr. Alvaro started an ‘olla comunitaria’ (community pot) that provides soup vulnerable people like children and the elderly.  It recently increased its frequency from one day to three days a week.

As the need increases, so does the number of local Caritas volunteers. The original small group of 5 has grown to over 500. Fr. Alvaro says this shows that, although life is difficult for many, people are not ready to give up.

He says, “We are going to keep going, keep pushing ourselves. I have a lot of optimism and lots of hope.” 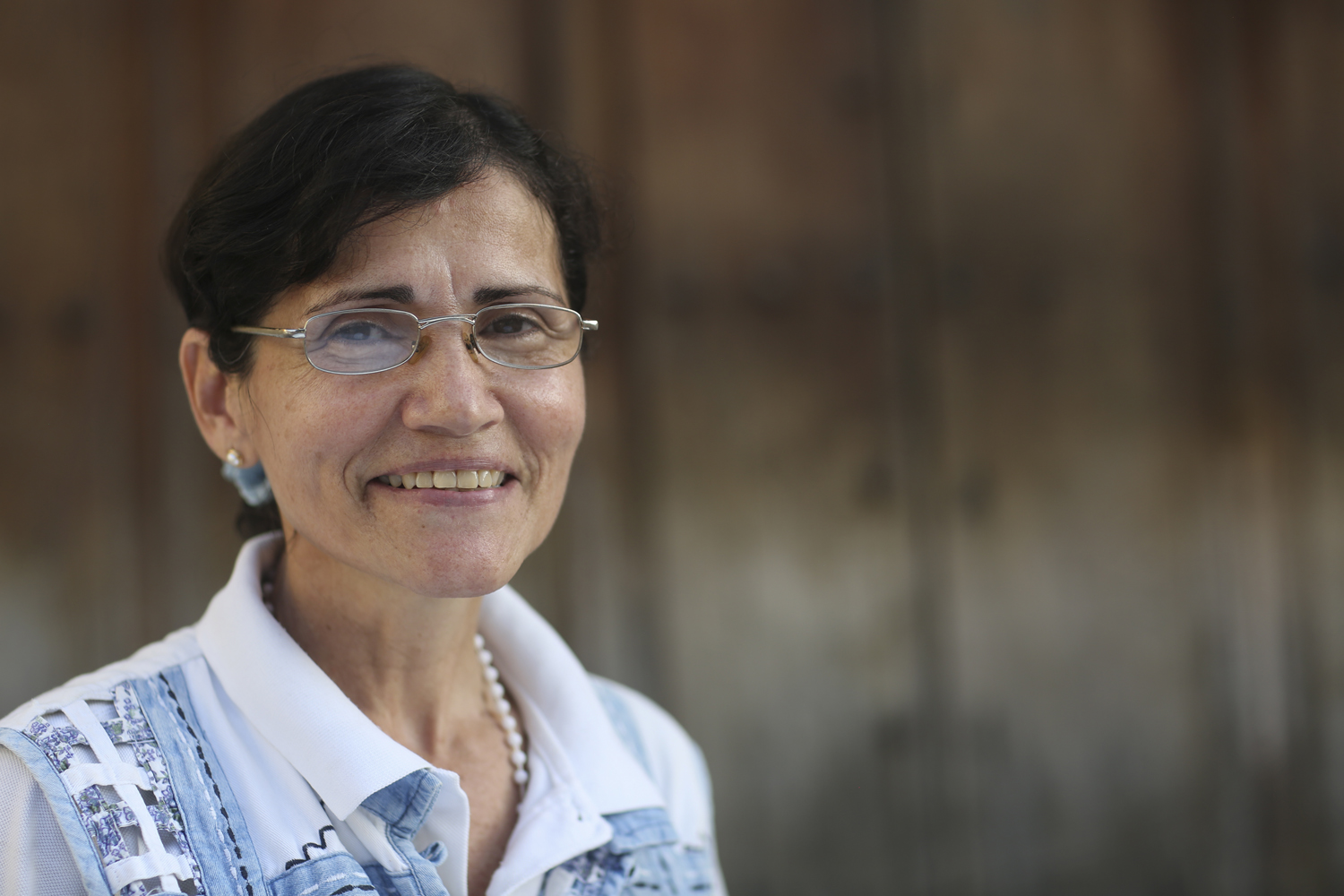 Recovering the joy of childhood

Caritas volunteer Dr. Rosas is concerned about hygiene in Venezuela.

A bar of soap costs 3 million bolivares, more than half the monthly take-home, making it a luxury relatively few can afford.

A lack of soap can easily lead to skin infections and stomach problems. If a child suffers from diarrhea they can quickly lose any weight gained on the nutrition programme.

The lack of money for medication also means that children’s illnesses can quickly get worse. Children coming to Dr Rosas’ clinic with bronchial asthma could go on to develop pneumonia. “A child might even die from illnesses that were once quickly resolved in Venezuela.”

Despite these worries Dr. Rosas finds volunteering very fulfilling. “When you see a child who is once again responsive, who answers your questions and is so energetic that the mother no longer knows how to keep her child still, that is the greatest satisfaction. We’re seeing children recover the joy of childhood.”

How nutrition programmes and soup kitchens are helping

Watch the photo gallery below to see how children and vulnerable people are getting help from Caritas Venezuela volunteers.

How you can help the Venezuela crisis

Support the Caritas volunteers who are providing food and nutritional supplements to the most vulnerable people in Venezuela.
DONATE TO OUR VENEZUELA APPEAL
7/09/2018 Emergencies, Food, Health, Latin America, Malnutrition, Migration, Refugees, Venezuela by Ffion Dean
Prev
Next
This website uses cookies to improve your experience. We'll assume you're ok with this, but you can opt-out if you wish.Accept Read More
Privacy & Cookies Policy
Necessary Always Enabled