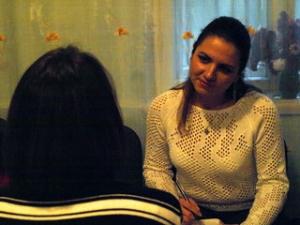 Caritas Spes of the Roman Catholic Church opened a centre in Kiev to provide psychological support to people living with HIV.
Credits: Kronner

When Natalya, a 28-year-old woman from Ukraine, learned she was HIV-positive, she said her father threw her out of the house. “He told me to go live with my drug addict boyfriend,” she said. “My church told me I was a bad person. It was terrible. I didn’t know where to go.”

She was just 21 at the time and pregnant with her first child, who was born without the virus. Her partner, an injecting drug user, has since died of AIDS.

Counselling is a crucial element in the HIV response. Without it, people may not know what to do or how to change their behaviour to protect themselves and to avoid infecting others. They may also despair if they have no outlet for dealing with the emotional impact of living with the virus.

In 2006, Caritas Spes of the Roman Catholic Church opened a centre in Kiev to provide psychological support to people living with HIV. A small team of trained psychologists and social workers offer individual and group therapy free of charge, as well as legal support, social assistance, and counselling to family members who do not have the virus. The team also provides palliative care to people dying of AIDS.

“We are helping people understand how to live with HIV and to know what their options are. We are working on changing behaviour, counselling people before and after testing,” said Miroslav Stanishevskij, one of the centre’s psychologists. “When they are diagnosed, they don’t know how to live with HIV. Sometimes they don’t seek treatment in the hospital for fear of being stigmatised or discriminated against.”

Natalya, for one, is grateful for their work.  “When I was sick in the hospital the last time, they told me I was going to die. I was in a deep depression. Caritas staff came every day to talk to me. They told me to be strong,” she said. “I was surrounded by people who were constantly using drugs and I needed to get out of that environment,” she added. “The people at Caritas understood me. They listened to me. They gave me good medical advice.” Her health has stabilized and she is now training to work part-time at the centre so that she can be there for others. “I want to help women whose husbands are drug addicts and let them know that there are alternatives.”

“In my opinion,” said Caritas HIV and AIDS specialist Rev. Msgr. Robert J. Vitillo, “the most objectionable and sinful form of discrimination occurs under the guise of religious denunciation of people affected by HIV and AIDS.

“Both the doctrine and tradition of the Churches have been built upon Jesus’ preaching, His sacrifice on the cross, and His resurrection from the dead. These salvific experiences should guide us to a selfless and non-judgmental acceptance of all human family, and most especially, of the most vulnerable and marginalised in society.

“As Blessed Mother Teresa of Calcutta said, ‘a person living with HIV/AIDS is Jesus among us. How can we say ‘no’ to Him?’”