The road to climate justice after Copenhagen 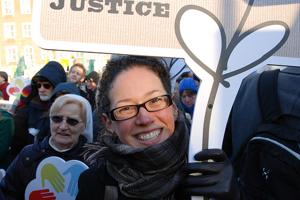 Caritas on the march for climate justice in Copenhagen.
Credits: Caritas Denmark

The Copenhagen Summit on climate change brought together 115 heads of state and governments. More than 40,000 people applied for accreditation. It was a grand but failed effort to reach a meaningful legally binding deal.

Bishop Theotonius Gomes, President of Caritas Bangladesh said that the powerful nations felt morally bound to come and listen to the issue, but they had been humbled by the challenge and the failure to find a solution.

The outcome was the ‘Copenhagen Accord’. It is a non-binding deal drafted up by the US, Brazil, China, India, and South Africa. The official governing body of the United Nation’s Framework Convention on Climate Change (UNFCCC) only agreed ‘to take note of’ it. Several nations refuse to recognize it altogether. Bolivia, Venezuela, Sudan, Tuvalu and others have registered their opposition.

Some think the Copenhagen Accord is the first time that developing nations have put their commitments on paper, others that it is simply a statement of political will. Either way, it falls short of what is needed to do to save the planet and what thousands of people had been demanding.

While the Copenhagen Accord acknowledged the science for keeping temperature rises below 2°C, or even 1.5°C in the future, it did not commit to reducing emissions to achieve that aim.

Nor have the country pledges made so far been enough to stay below the 2°C limit. Some are even weaker than those made before Copenhagen.

Unless these targets are increased, global temperatures will rise by more than 3°C. That is far above the threshold for dangerous climate change.

Funding was a priority for poor countries. Wealthy nations made short-term financial pledges, but there is no mechanism to collect or distribute that money to those who need it most. Long-term financial assistance for developing nations to adapt to climate changes and plan sustainable growth is unresolved.

The risk is that the Accord will sidetrack the UN process and the Kyoto Protocol, the only treaty that commits developing countries to binding emissions reductions. This would ignore the very principle of historical responsibility of those countries that have contributed most to the problem.

Most developing countries say Kyoto must continue. The outgoing UNFCCC chief Yvo de Boer said, “You don’t throw out an old shoe till you have a new one.”

Climate negotiators now must put UN talks back on track. No agenda has been set at this stage. Some developed country governments are hesitant to draw renewed attention to the vast divisions that remain among countries.

The UNFCCC Secretariat announced an extra negotiating session to take place in Bonn, 9 to 11 April to set an agenda for negotiations until the next big meeting, called Conference of Parties (COP), in Mexico in November 2010.

This meeting will set the negotiating schedule for the year. In the meantime, developing countries continue to suffer the effects of climate change and the support they require remains elusive.