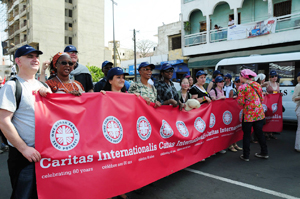 Delegates from different Caritas organisations are marching at the World Social Forum in Dakar, Senegal, from 6 to 11 February. Credits: Caritas

An African proverb that would best sum up the global movement that is the World Social Forum would be: “Many small people in many small places will do many small things to change the world”.

An estimated 70,000 participants from across the world attended the 11th WSF at the University Campus Cheikh Anta Diop in Dakar, Senegal.

Participants included people from the business sector, trade unions and government, however the largest demographic was composed of non-governmental actors and civil society organizations.

In the weeks leading up to the forum, several caravans drove across Africa in an attempt to raise awareness about this social justice movement. The caravans joined thousands of activists who walked the streets of Dakar during the official opening march with the message ‘another world is possible’.

While the forum is loosely governed, an impressive number of platforms for dialogue were created throughout the campus. From 6 to 11 February, hundreds of self-organised activities took place on issues that ranged from small-scale agriculture and land investments to migration and climate change; all with the intention of bringing humanity to the heart of the discussions.

Within the Caritas family alone, hundreds of delegates from over 44 countries came together in Dakar and hosted eleven workshops. Under the leadership of Caritas Senegal, Secours Catholique (Caritas France), and Caritas Internationalis, participants shared their knowledge and experiences.

Delegates gathered in hallways, in classrooms, in tents and in the Church to help strengthen individual capacities on all levels in order to find appropriate solutions for and with local communities.

During mass, Théodore Adrien Cardinal Sarr, Archbishop of Dakar, empowered people by reminding them that ‘we are the salt and the light of the earth’.

In reference to the salt, he called on them to fertilize the communities in which they live and enrich the lives of those around them.

As for the light, he implored them to lead by example and to take care of our fellow man. Being a light also reminded them to shine light in the dark corners of the world where corruption reigns. (Read the full homily here)

The forum was a powerful reminder that people have the power to elect the governments, support businesses, and create organizations that are equitable and fair for future generations. These are all crucial components in the fight for equality, poverty elimination, and the rights of the most vulnerable communities.

We should not lose sight of the great knowledge sharing and networking that took place in Dakar because capacity-building at the grassroots level are steps in sustainable, long-term global solutions.