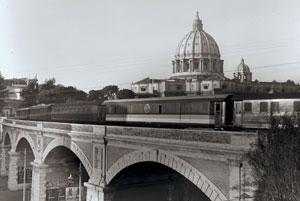 A heritage train like this, “Caritas Express” will run from the Vatican City Station behind St Peter’s Basilica to Orvieto in Umbria on the eve of the 19th General Assembly of Caritas Internationalis.
Credits: Ferrovie dello Stato

It’s the shortest national railway system in the world with just one tiny station, no registered rolling stock and no railway workers. It’s rarely used, but on Saturday 21 May 2011, the Vatican City State Railway Station will open its two sets of tracks of only 300 meters long especially to mark the 60th Anniversary of Caritas Internationalis and to raise funds for its worldwide humanitarian work.

The “Caritas Express” will run from the Vatican City Station behind St Peter’s Basilica to Orvieto in Umbria, a journey of 100 kilometers, on the eve of what is also the 19th General Assembly of Caritas Internationalis.

The carriages will be pulled by heritage steam and electric locomotives that will be placed under the patronage of saints venerated for their service to the poor and vulnerable.

The Vatican City State Station was built under the Lateran Treaty of 1929 which was established between the Holy See and the Italian State. When he saw it under construction, Pope Pius XI, described it as “the most beautiful station in the world.” It is sumptuously decorated with eight pillars of green marble all carved from the same block. Pope Pius XI himself never travelled on the line and his planned Papal train was never built. But Pope John XXII became the first Pontiff to travel on the Italian Presidential train, in 1962, between the Vatican City station and Assisi. The parlour car he used will be part of the “Caritas Express”. Pope John Paul II also travelled on the line in 1979 and 2002. In the past, emergency relief supplies have been loaded at the “Pope’s Platform” onto special Caritas trains for delivery to flood victims in northern Italy and elsewhere.

The “Caritas Express” has been made possible due to collaboration between the Governatorato of Vatican City, Ferrovie dello Stato (the Italian State Railway System), and Caritas Internationalis. Ferrovie dello Stato is a keen supporter of the Caritas Romana hostel for homeless people that is attached to Rome’s Termini station.

The “Caritas Express” will pull out of the Vatican State Railway Station at 10.00am on 21 May 2011, returning to Termini Station at 7.30pm. The border between the Vatican City State and the Italian Republic will be opened especially to let it pass. The Australian Ambassador to the Holy See, His Excellency Tim Fischer, in his private capacity as a former railway company director and noted train enthusiast, helped to develop the Caritas Express project.