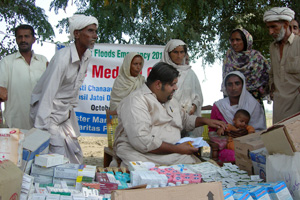 At the end of August 2010, almost one fifth of Pakistan was underwater. Along its entire length, the Indus river had burst its banks, washing away homes, destroying crops and livestock and bringing disease. For the 20 million people affected by the floods, it was an unparalleled disaster.

“We were sleeping when I heard screams that the embankment was breached. At first I thought that we were going to die. However, we managed to escape with our charpoys (beds) and my six grand children,” said 60-year-old Gamul Mai. “The raging waters swept away our mud house. I have never been that terrified in my life.”

Gamul Mai developed a high fever after escaping the three-feet wave in her village in Sindh. Shortly afterwards, she visited a health centre run by Caritas Pakistan with her two young nieces who were suffering from malaria and skin allergies.

She also received food items and mosquito nets from Caritas Pakistan during a distribution in Khewali, one of the flood-stricken villages in Kashmore in Sindh.

At the same distribution, Ali Nawaz, a 42-year-old Muslim farmer, told Caritas how he lost a year’s storage of wheat and ripened crops. “The sugar cane and rice fields were almost ready. Now, the whole of my irrigated land is under water,”he said.

Over 350,000 flood victims like Mai and Nawaz received relief supplies such as sleeping mats and mosquito nets from Caritas in the months after the floods. One-hundred-thousand people were assisted with food parcels.

To help people access healthcare after the floods, Caritas established health points and dispensaries as well as mobile medical units, which travelled to the most affected areas.

Doctors from Caritas Netherlands (Cordaid) treated people with acute diarrhoea and respiratory infections and reported an enormous rise in skin infections caused by contaminated water. The Caritas confederation is working in Pakistan through national member Caritas Pakistan, Cordaid (Caritas Netherlands), Trócaire (Caritas Ireland), CRS (a Caritas member based in the US) and Caritas Switzerland. A National Coordinator has fostered cooperation between the work of different members.

Bishop Joseph Coutts, the President of Caritas Pakistan, said, “This flood was the worst in 80 years, longer than even my living memory. We have helped people help themselves to recover.”