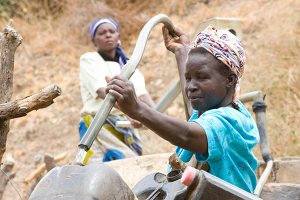 Built by Caritas Kenya as part of the Katangi Food Security Project in 2008, the Kwa Kivanga dam has been a huge success.
Credits: David Snyder/Caritas

As if the cracked earthen floor of the Kwa Kivanga dam is not reminder enough of the drought gripping Kenya, the long waits for water make memories of last year’s plenty that much more painful. Just one year ago, this pond in Kenya’s drought-stricken Eastern Province helped feed a nearby borehole with so much clean water that local residents could fetch all they could carry – a memory local resident Daniel Motiso cannot help but smile at now.

“We had a pump but it wasn’t producing much water. We could only get one jerry can each day because we limited the water,” Motiso said of the days before the dam was built. “After the dam we could get four cans.”

Built by Caritas Kenya as part of the Katangi Food Security Project in 2008, the Kwa Kivanga dam has been a huge success. Here in the village of Kalele in southern Kenya, where locals often walk for hours each day to collect water from distant sources, the hand-dug dam helped trap 21,000 cubic meters of rainwater within an easy walk of nearby villages. Accessible above ground by the nearly 6,400 beneficiaries of the project – who also contributed their labour to its construction – the pond also boosted the pressure from a nearby borehole, cutting waiting times for those fetching water dramatically.

But the dam is just one element of the project’s success. Aimed at increasing food security, the Katangi project also provided livelihood opportunities for beneficiary families. By providing an improved breed of goat to 350 beneficiaries, the project calls for each recipient to pass on the first kid produced to other beneficiaries, meanwhile using the valuable milk the goats produce for both household consumption and sale.

“I had a goat but it produced only 200 ml of milk (per day),” Motiso said. “My new goat is still too young but soon it should be able to produce up to four litres in a day. Some of this milk we could sell.”

With the failure of the early rains in 2011, Kenya’s drought has put projects of the Katangi Food Security Project quickly to the test. So severe has the drought been, impacting 3.6 million Kenya’s directly, that the Kwa Kivanga dam dried up. Residents report waiting for as much as nine hours to fill one 20 litre jerry can from the neighbouring bore hole, which has remained viable thanks largely to the water trapped in the underground aquifer by the dam itself. Unwilling to take chances, however, the village committee now rations the water to one jerry can per family every other day.

“We used to take this water to our homes and use it for our gardens,” Motiso said. “Now we don’t have enough water to do that. It is only for drinking and livestock.”

And though dry now until the next rains, the Kwa Kivanga dam proved its worth to local residents. In the nearby village of Mwsini Ikombe, a group of 30 or so villagers gather each Monday to build their own dam – removing shovelfuls of dirt under Caritas guidance to build a micro dam they hope will provide the kind of benefits to their village that Kwa Kivanga did for Kalele. And each day, villagers say, others are coming to help.

Equipped though they are now to handle the lean times, Daniel Motiso and the villagers of Kalele face a thirsty season before the hope of the next rains in September. It is a desperate time, Motiso says, as livestock thin and food prices soar, further draining meager household resources. As Caritas Kenya ramps up for emergency assistance to those most in need, coping strategies like wood cutting threaten to further damage the already diminished landscape. It is a price, Motiso says, the villagers of Kalele will simply have to pay later.

“People are cutting the trees down for charcoal and firewood,” Motiso said. “This is very negative [for the environment], but we have to feed our families.”