National truth and reconciliation: A long road ahead for Côte d’Ivoire 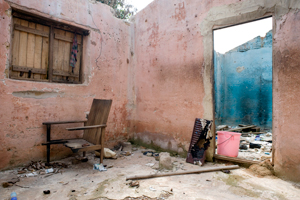 In order to encourage refugees and internally displaced persons to return to their home, damaged houses such as this one should be rehabilitated.
Credits: Xavier Schwebel / Secours Catholique

“Gbagbo’s soldiers came. It was nighttime, they shot and killed people. I ran away with my two children. My husband disappeared.” This is how Patricia, a 23-year-old mother from the Man region in western Côte d’Ivoire, described her ghastly experience to members of a Caritas mission last June. Patricia, who was five months pregnant at the time, walked through the forest for a whole week before being taken in by a woman. Then once again soldiers attacked the village and she fled to Liberia. But nothing was organised there to welcome her and other villagers. In the end, the people displaced from this village went home and are now sharing their scant resources, which are quickly running out.

“I’m afraid to go back home,” says Jacques, who fled his village of Benouin in April. According to him, pro-Ouattara militias are responsible for the devastation of his village this time. Jacques is sure of this.

Members of a Caritas Internationalis mission managed by Caritas Côte d’Ivoire have heard many similar eyewitness accounts. On 3 October 2011, the International Criminal Court (ICC) authorised its prosecutor to investigate crimes against humanity and war crimes alleged to have been committed in Côte d’Ivoire by the forces of former President Laurent Gbagbo and President Alassane Ouattara.

“This initiative is a step in the right direction according to Jean Djoman, the national coordinator of humanitarian operations Caritas Côte d’Ivoire.

In addition to the ICC’s actions, the Ivorian government has also set up a National Commission of Inquiry into the post-electoral events. This authority will investigate and deal with cases of serious violations of human rights.

Finally, a Dialogue, Truth and Reconciliation Commission (DTRC) was also established by Presidential Decree. The DTRC will hear the evidence of victims, perpetrators of violence and witnesses, but it has no judicial power. It doesn’t pass judgment or hand down sentences, but rather strives to achieve revelation of the truth, restoration and consolidation of social bonds, and peace.”

Caritas Côte d’Ivoire will follow and support this process of reconciliation and peace. “It’s a question of bringing the various communities closer together via a nationwide programme as the crisis has affected the whole country,” explains Jean Djoman. “Pastoral workers will be trained in reconciliation and peace-building procedures using the tools kit developed by Caritas Internationalis and in partnership with the Justice and Peace Commission.”

He added that Caritas will also support initiatives already underway, as well as those initiated by churches and local communities. For example, in the west of the country, near the border with Liberia, the association of village heads is carrying out actions to raise awareness and bring communities closer together. Caritas could help them by facilitating transport for village heads and providing conflict-resolution training.

A process with conditions

While the process is a priority for Caritas Côte d’Ivoire, Jean Djoman points out that it cannot be implemented without help from others. “If the process of reconciliation and promotion of social cohesion is to succeed, refugees and internally displaced persons must be helped to go back home. This return depends on bringing peace to all parts of the country and rehabilitating badly-damaged homes. Agricultural production needs to be relaunched quickly in order to ensure families’ food security. Finally, rehabilitation of schools, some of which were turned into military camps, should not be neglected. If these conditions are met, the reconciliation process could bind together the new Côte d’Ivoire.”

On 11 December, Ivorian citizens will be called upon to vote again in general elections. Will the country have gone far enough down the road towards peace and reconciliation to allow the elections to take place without lapsing into violence? It’s a question that everyone involved should be asking themselves today.