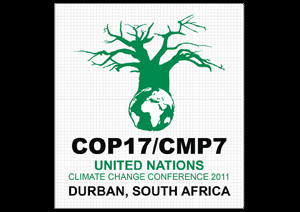 Twenty Caritas delegation will be taking part in several events in Durban in focusing on the impact of climate change in Africa.
Credits: Courtesy of COP17/CMP7 brand

He will urge governments for a deal on climate change that puts poor communities in developing countries first and provides for a sustainable future.

Cardinal Rodriguez and Caritas South Africa will be leading a delegation of representatives from the Caritas confederation’s over 160 Catholic aid agency membership.

The 20-strong Caritas delegation will be taking part in several events in Durban in focusing on the impact of climate change in Africa.

Cardinal Rodriguez said, “Our climate is changing. Caritas organisations are responding to increasing unpredictability and extreme weather conditions experienced around the world. This year we saw floods in Central America, South and South East Asia and drought across East Africa.

“Urgent action is necessary. Climate negotiators in Durban must not further delay agreeing to international legislation to curb the threat of climate change and set the world on a path to a more just and sustainable future.”

In 2011, the East of Africa suffered the worst drought in half a century. Drought is not new in East Africa but changes in weather patterns combined with lack of investment, competition for land and water have eroded the capacity of local people to cope.

“The whole world is vulnerable to climate change but poor countries are affected more,” said Cardinal Rodriguez. “Africa is one of the most vulnerable continents to the impacts of climate change. Africans are taking a stand in Durban, it is time for the world to stand with Africa.”

Caritas says negotiations at the UNFCCC meeting must take the necessary steps for a fair, ambitious and legally binding agreement that builds on the Kyoto Protocol. Decisions are needed to reduce greenhouse gas emissions by more than 40 percent by 2020 by developed counties.

A key concern for Caritas is ensuring that all men and women around the world have enough safe and healthy food. Climate change affects food security because the modification of climate patterns seriously affects agriculture.

The right to food must be a guiding principle at Durban. For Caritas, it means ensuring that the one billion people living in extreme poverty are both the beneficiaries and the engines of agriculture and food security policies.