In drought-stricken Horn of Africa, Caritas brings water to the thirsty 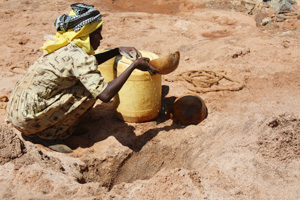 In southern Kenya, a woman uses a gourd to scoop water from a dry riverbed. During droughts, many women walk hours to find water.
Credits: Laura Sheahen/Caritas

“I saw the crocodile along the riverbank, 10 metres away from me.” Teresia Katulu, age 22, was used to walking long distances to fetch water for her family in southern Kenya. As a severe drought dried up closer water sources, she had to go to a river two hours away—and carry twenty litres home.

The work was always drudgery, but now it was dangerous. “Parents warn their children to throw stones before going to get water,” says Teresia. That’s what Teresia did, and the stones drove the crocodile away. Hippos are also at the river where she and other villagers went during the drought of 2011. Hippos are more feared than crocodiles: “If they get you, they’ll bite you in two,” Teresia says matter-of-factly.

Some people don’t see the animals until it’s too late. “A crocodile killed my sister’s husband,” Teresia goes on. “She has four children.”

Less dramatically, but on a much wider scale, lack of water was hurting families throughout the region—not just in Kenya, but in Somalia, Ethiopia, and nearby countries. Crops shrivelled. Farm animals died. People spent so much time searching for water that they didn’t have time for anything else.

In southern Kenya, wide riverbeds turned sandy and brown. Women used gourd shells to dig further and further down in the riverbeds, hoping to capture a few scoops of water. Unless they had a donkey, the women carried heavy containers of water for hours. “The donkeys were very hungry too. Sometimes they couldn’t carry the water,” says Nancy Wanjagi, a villager living in southern Kenya.

In northern Kenya, things were worse. “People would sleep two days by a dried-out waterhole, waiting for some water to seep up from the ground,” says Emmanuel, a day labourer who lives near the town of Marsabit. The drought worsened tribal tensions in an area where territory is jealously guarded. “People were stealing water from other communities’ water holes, where they are not allowed,” says Zeinabu Eisimfecha, a widow with seven children who lives in Marsabit. “They go out at night. The owner waits in hiding and shoots them.”

“We were terribly thirsty. My mouth and throat dried up,” says a woman in a village near Marsabit. She had about 100 goats and 40 cows; as the drought worsened, they died off in dozens. “I have four cows now and 9 goats,” she says.

At a primary school in her village, water tanks captured the roof runoff on the increasingly rare days when it did rain. Monkeys and wild elephants would enter the schoolyard to get at the tanks. “Two baboons died in the school water tank. They got in and couldn’t get out,” says the head teacher, David Madere. “We took out their bodies but used the water anyway. There’s so little water, we had no other choice.”

“The distance between water points was stretching day by day,” says Caritas’ Shadrack Musyoka. Even in a good year for rains, Kenya and other East African countries have trouble with water conservation. Impoverished people simply can’t afford the 10 dollars it costs to buy a plastic water tank to collect rain from their roofs: “I use pans and buckets to catch the roof water,” says Susan Wanjiru, a single mother of six. In some areas of Kenya, salinity issues create problems when digging wells. After three years of poor rains, many of the usual water sources were tapped out, clogged with silt, or so stagnant they are scummed over with algae.

Working with local dioceses, the worldwide Caritas network sprang into action to stretch every drop of water and keep it from flowing away unused. Caritas staffers throughout East Africa mobilized communities to create dams, dig irrigation canals, lay pipelines, and create tapstands. Caritas dug boreholes, provided water tanks for schools, and organized water troughs for animals. Villagers were paid to build dams or desilt reservoirs. And when there simply was no water to catch, Caritas trucked in water.

Wanzia William, a mother of six in southern Kenya, used to spend her whole morning fetching water. “I would leave at 8 am and return at 1,” she says. “I don’t have a donkey so I would use my back.”

Now she spends her morning hours moving earth to build a dam for her village, and is paid for her work. The dam’s pond is filling with water and should soon be ready to use. “Having the water point near is going to save us a lot of time and it’s less tiring,” she says. Caritas trains villagers to maintain and repair the water system they construct. “We want them to take ownership of it and feel responsible for it,” says Anderson Kioi, an engineer with Caritas.

Teresia and her neighbours no longer have to brave crocodiles to reach water. A tapstand and dam project that Teresia helped clean supplies water to hundreds of people. “Now I spend half the time I used to get water,” she says. “I have more time to tend my farm.” She uses the money she earned from the project work to buy food for her three children.

Tens of thousands of people now have water close by, and have more water, because of Caritas programmes. “It used to be 8 kilometres to get water. We’d go long days without drinking,” remembers Rosalia Orguba, who lives in northern Kenya. She helped move stones to create a water source closer to home, and is proud of what she and her team accomplished. “Water is life you can’t do anything without it.”