In Haiti’s Port-au-Prince, Cordaid is helping communities to reinvent their neighbourhoods 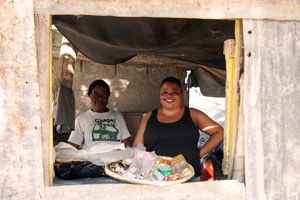 “These housing estates are the future for me and my family.” Bénisette, called Bébé by people in the neighbourhood, poses proudly in front of the materials that will be used to build her new house in the Villa Rosa neighbourhood in Port-au-Prince. Behind her, we can see the tent that has provided shelter for the five members of her family since the earthquake on 12 January 2010. The prospect of moving into her new house soon brings a broad smile to Bénisette’s face.

She tells us: “If everything goes well our new house will be completed within two months. It’ll have two stories. With the first instalment of the money we received from Cordaid we bought the building materials. In addition to paying the workers, my family and I take part in the construction by fetching water for the cement and preparing meals for the people working on the site. That way we feel as if the new house will really be ours.”

Around 100 families like Bénisette’s have benefited from Cordaid’s assistance in rebuilding or repairing their houses. Henk Meijerink is head of the shelter building programme at Cordaid. “More than 2,000 families are affected in Villa Rosa. We carried out an assessment of 1,800 of the families to evaluate needs and select the most vulnerable for immediate assistance. Of the 1,335 houses standing before the earthquake, around 600 were completely destroyed and 260 in need of repair. Together with the local authorities, we selected the Cité Meriken area in Villa Rosa to implement the pilot phase. Around 100 houses will be built or repaired, but we also wanted to show that it’s possible to improve living conditions in the neighbourhood.”

To achieve this, Cordaid has opted to apply the strategy of the “owner-driven reconstruction” method. This strategy is based on the capacities and cultural practices of the local population. Homeowners choose the architecture of their houses, buy the materials, hire site managers and supervise execution of the works. This method puts beneficiaries and local people at the centre of the action so as to ensure greater satisfaction in terms of results, increased job creation and faster economic recovery in the targeted area.

“We believe that house building should be scalable. It depends on the ambition and wherewithal of each owner,” Henk Meijerink points out. Housing is particularly important in Haitian culture. Here and there you can see that decorative features have been added to enhance the prestige of a house.”

The objective is not only to rebuild houses, but also to create a new urban fabric to transform the lives of neighbourhood residents. 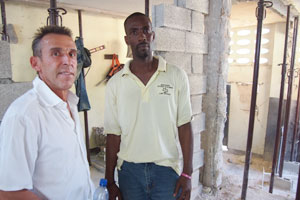 Océan is a community worker for Cordaid in Villa Rosa. He knows the neighbourhood where he grew up very well. “We have the opportunity to work together to make the neighbourhood more attractive than it was before. Together with the local authorities and local people – by pooling the expertise of the various local and international partners – we’d like working class neighbourhoods to have a facelift. The houses are built in compliance with earthquake resistance requirements. However, in certain places we suggest building two-storey houses to keep some spaces clear. This will enable us to build children’s playgrounds, expand the road access network, set up a storm water collection system and establish shopping areas where people can earn their living.”

Within the scope of the project, Cordaid assists families in designing their houses. Cordaid also trains site managers from the local population in the various building trades. The organisation supplements it expertise by working with other international organisations, such as Build Change – a specialist in construction in earthquake-prone areas – which is responsible for technical assessment of house plans and supervision of the quality of completed works.

A Neighbourhood Reconstruction Committee (NRC) is set up in each area to manage funding applications as well as each project’s compliance with the neighbourhood’s urban development plan. Families can submit a funding application to the NRC. For each house rebuilt, a maximum of US$3,500 is offered to homeowners. For houses in need of repair, the funding amounts to US$1,500 per home. The funding amounts are sufficient to get works underway, but also limited in order to encourage homeowners to participate in rebuilding their homes by providing additional funding, building materials or even labour.

Ensuring application of the law for the benefit of the poorest

“When I met the people from Cordaid, they told me I had to submit official land ownership documents to receive assistance. But I’ve never had any such documents.” As in the case of Marie Solange Nestor, Cordaid requires each beneficiary to provide proof of ownership of the land where building and repair works are to take place. This requirement is designed to avoid eviction of families once the works have been completed. However, in Port-au-Prince settlement in some neighbourhoods has always taken place on an informal basis. 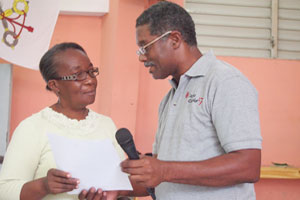 Marie Solange Nestor and Raoul Pierre Louis Turgeau, the chairman of the board of directors of the local authority of Villa Rosa (CASEC),
Credit:Worms/Caritas

“Today I’m happy,” says Marie Solange Nestor. “I didn’t expect to receive this great news. Thanks to you, the lives of me and my family have changed for ever.”

To help Marie Solange Nestor and other families who have no title deeds, Cordaid has worked in close collaboration with Raoul Pierre Louis Turgeau, the chairman of the board of directors of the local authority of Villa Rosa (CASEC), so that the poorest may assert their rights.

“A Haitian law stipulates that persons who can prove they have lived on a plot of land for 20 years have the right to claim ownership,” explains Anna Watchmeister, Cordaid’s manager for the shelter building programme in Haiti. Until now, this law had never been applied in an urban area. In Villa Rosa, we decided to support eligible persons so that they could submit applications. Consequently, community workers helped people to collect the relevant documentary evidence to submit an application, and today we’re celebrating a great victory.”

In this month of November 2011, for the first time in Port-au-Prince documents that legitimately recognise the right of possession, usufruct and other enjoyment have been issued to seven families who had lived on the same plot of land for the last 20 years. To prove this, the families submitted statements from three different people in their neighbourhoods who are deemed trustworthy. Subsequently, these statements were verified and confirmed to be true by the chairman of CASEC, Raoul Pierre Louis Turgeau, who will submit the documents to the Haitian Court of Justice for formalisation of the title deeds. This will be the last stage of the procedure.

The authorities of the Haitian capital attended the ceremony at which the documents that legally recognise the right of possession, usufruct and other enjoyment were handed over. The work carried out by Cordaid with the local authorities was a first, and will serve as an example for many other communities in the disadvantaged neighbourhoods of the city. By showing that this law can be applied in urban areas, Cordaid and the local authorities of Villa Rosa have paved the way for greater housing security for thousands of poor families in Port-au-Prince.

As she receives her certificate of recognition, Marie Solange Nestor is moved. “I feel happy and proud because I never thought it was possible. Before, to obtain a plot of land you had to give a lot of money to many people. Today I’m so happy because now I know there’s no danger of losing my house. I can rebuild it and look forward to the future with confidence.”