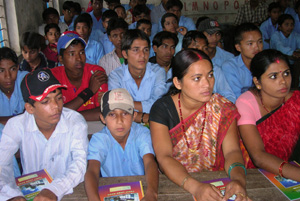 This is Part 1 of a two-part article on human trafficking. To find out more about how COATNET helps former victims, see Part 2.

“When we started in the early 2000s, a common way for traffickers to lure people was through ads in the newspapers,” says Gabriela Chiroiu of Caritas Bucharest. “They’d offer attractive jobs in modeling or dancing, needing no experience. The ad would say ‘young people preferred.’”

“In Romania, unemployment is high. Factories and companies continue to close,” says Chiroiu. “People think, ‘OK, someone’s offering a job that’s maybe not the best job in the world, but something is better than nothing.’”

But the ads were really targeting teenage girls for sex work. “Then people started being careful about such ads,” she said. “We and other groups checked all the modeling agencies—we called them. We created a blacklist of about 20 agencies.”

Today, such ads are more likely to be on the internet. Criminals are constantly changing the ploys they use to sell women into prostitution, trick men into unpaid farm labour, or recruit children into beggary. For the organisations dedicated to preventing human trafficking, that means constantly evolving too.

Caritas Internationalis hosts COATNET (Christian Organisations Against Trafficking in Human Beings). COATNET includes the Catholic Caritas agencies as well as Protestant and Orthodox groups. At a meeting in late 2011, COATNET members talked about the criminal tactics they’ve seen over the years, what they’re seeing now, and how they’re fighting back.

For those who want to go abroad in the hopes of higher wages, shady employment agencies are another trap. “They get you your passport and your plane ticket,” says Rupa Rai of Caritas Nepal. “Then at the last minute the agency says, ‘we need money to finish this up.’ So people sell their jewelry, their land, their house.”

In India and Nepal, a family friend may tell a teenage girl that she can get good-paying work as a maid. Then the friend will help the girl get train ticket to a big city, where she is sold to a brothel.

The “lover boy” approach is another tactic. Young men hang around schools, looking for vulnerable girls. “He starts talking to the girl, giving her presents, taking her around in his car. The boy keeps the girl’s family and friends away until eventually he’s the only person she has,” says Ivonne van de Kar of the Dutch Foundation of Religious Against Trafficking in Women.

“Then the boy says, ‘If you help me pay this debt, we’ll be able to start our life together.’ She ends up working for him in a brothel, or smuggling drugs,” says van de Kar. “It’s how pimps have always found their women. The girls believe the guy loves them, even if he beats them.”

During sports events, “We plan to find out who are the managers at the airports, at the train stations, at the hotels,” says Sr. Imelda. “The idea is that they get our information package and we train those managers to recognise a victim of trafficking on their airplane, in their hotel.”

Traffickers learn patterns that will help them smuggle their victims to other countries, so COATNET members watch for those patterns as well. “Traffickers know that on certain days, at certain times, there aren’t enough checkpoint authorities at small Irish airports,” says Sr. Maura O’Donohue, speaking of women who are trafficked through Ireland to the UK. “The traffickers take the women through Ireland on those days.”

As tactics change and recruitment areas shift, COATNET members adapt as well. By knowing where traffickers work and how they operate, COATNET groups can warn vulnerable people of the risks–and give them strategies for escaping if they do get in trouble.

This is Part 1 of a two-part article on human trafficking. To find out how COATNET groups are preventing trafficking or helping former victims, see Part 2.

Laura Sheahen is a Communications Officer for Caritas Internationalis.