G20 must tackle hunger by fighting its roots causes 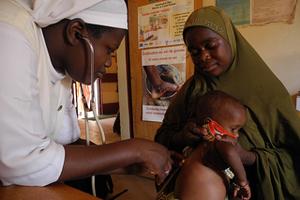 Haoua’s daughter was assessed at St Augustine Health Centre, which is managed and funded by CADEV (Caritas Niger), and found to be seriously malnrouished. The centre treats about 200 people – mostly small children – for malnutrition each week. It normally takes just 21 days to cure a severely malnourished child.
Credits: Nick Harrop/CAFOD

The Caritas-CIDSE G20 Network of Catholic agencies says making sure all people have access to appropriate food must be the priority for the leaders of G20 economies as they meet 18-19 June in Mexico.

There are 925 million people in the world without enough to eat. About 300 children die from malnutrition every hour while one in four children is stunted, and in developing countries that figure rises to one in three. Yet we produce more than enough food globally to feed everyone.

The Caritas-CIDSE G20 Network says reducing inequality and promoting sustainable development must be at the heart of the G20s plans to address food insecurity in the short, medium and long term.

Caritas Internationalis Secretary General Michel Roy said, “Hunger is not inevitable. It must be tackled by fighting its structural causes, primarily by promoting sustainable agricultural development of poor countries.”

CIDSE Secretary General Bernd Nilles said, “The Mexican G20 has a real opportunity to show leadership on the issue of food security by ensuring better regulation of markets, strengthening of local food production and creating better access to markets for small-holder farmers. The G20 also have a particular responsibility to lead the fight against global poverty, since more than half of the world’s poorest people live in G20 countries.”

The G20 must act on the financial markets where under-regulated speculation is increasing food prices that are harming the poor.

Tackling this problem requires greater intervention by public authorities, including at a global level, to rein in speculation, improve supervision of and increase transparency of markets.

Emergency reserves and buffer stocks are needed in the poorest countries to protect the most vulnerable and stabilise market prices.

The Caritas-CIDSE G20 Network is a Network of 180 Catholic agencies working in collaboration to advocate at the G20 for the most vulnerable in our world.