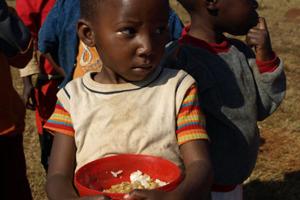 Children need to eat nutritious food not only while taking ARVs, but also before starting treatment.
Credits: Hough/Caritas

Washington, DC—A report assessing the engagement of Catholic organizations in The Global Plan towards Elimination of New HIV Infections in Children by 2015 and Keeping their Mothers Alive will be released to media at a press conference on Wednesday, July 25, at 3:00 pm. The study will also be presented that evening at 6:00 pm in the Faith Zone of the Global Village at the International AIDS Conference in Washington, D.C.

The report, based on a survey by the Catholic HIV/AIDS Network (CHAN), documents the involvement of Catholic Church-related organizations with National AIDS Programs and their awareness and involvement in the Global Plan.

“The Global Plan seeks involvement from religious organizations to encourage early testing and treatment for pregnant women living with HIV and their children,” said Msgr. Robert J. Vitillo, Special Advisor on HIV/AIDS for Caritas Internationalis. “The study findings indicate challenges that must be confronted by governments and churches alike in efforts to reach the goal of zero new infections among children by 2015 and of keeping HIV+ mothers alive and healthy.”

In June 2011, the Joint United Nations Program on HIV/AIDS (UNAIDS) launched The Global Plan in response to a global increase in cases of perinatal (mother-to-child) transmissions of HIV. Focusing on 22 priority countries, the plan includes a detailed timetable for action at the community, national, regional and global levels.

The press conference on Wednesday, July 25, is at 3:00 pm in Press Conference Room 3 in the Media Centre of the International AIDS Conference.

AIDS 2012 is the 19th International AIDS Conference and the first to be held in the United States for over 20 years. IACs are held every two years and are the peak forum for those working in the field of HIV and AIDS, including scientists and researchers, policymakers, health professionals, people living with HIV, civil society activists and faith-based organizations. AIDS 2012 is taking place 22-27 July at the Walter E. Washington Convention Center.