New challenges for the people of Lake Chad 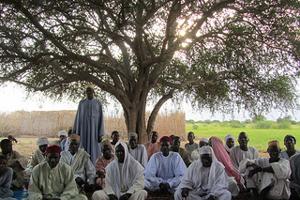 Balama was a village once located on the shores of Lake Chad, in the east of the county. Since the 1960s, the lake has been greatly reduced. A changing climate and uncontrolled use of water for irrigated agricultures combined with population pressure, has led to the receding of the lake to 10 percent of its original surface. Nowadays, only during the rainy season does Balama lie on the shores of Lake Chad. These new natural environment factors have had a major impact on the livelihoods of the inhabitants of the region.

Now in the rainy season, fishing nets and traps are still laying outside the houses. The drop in water level worries the villagers who have always been fishermen. “We are more and more dependent on agriculture”, explains Zara Muhammad, the president of the local women’s group. “The fields we are creating lie on the former lake ground and are initially very productive. Nevertheless, after a few years the production decreases,” she said.

For a few years, the residents of Balama cannot meet their own needs. Last year was a particularly difficult year. Because of the low rainfall and destruction caused by herds of elephants and insects, the farmers could only yield a small harvest. The few agricultural products that were actually harvested were unfortunately consumed after just a few months. This phenomenon not only affects Balama, but also the whole region around the lake, where only 15 percent of the whole population’s need for food can be produced.

During this difficult period between the end of 2011 and the beginning of 2012, Secadev, a local Caritas organisation, witnessed the situation and its effects on the people in Balama. Thanks to the support of Caritas Switzerland and the international Caritas network and as part of an emergency project, Secadev was able to distribute food and seeds to the inhabitants for the next planting season. Two major women’s and men’s groups of the village could also profit from this support. Meanwhile, the women would cultivate the fields together, with the men collectively storing the yields.

“We want to unite our forces, that is the idea behind the joint work,” said Zara. “37 women belong to our group at the moment. I divide the women into different subgroups, each one taking care of one field. At the moment, we are planting corn and gombo. From October on we will be planting peppers, onions and other vegetables.”

While the vegetables are often used for personal use, or sold at a market in the region, women plan to sell a portion of the corn crop. From the revenue they will buy goats and sheep, as well as goods from Nigeria, the country in which they have trade relations.

“Thanks to the seeds from Secadev we have achieved new sources of income. This gives us security”, says Zara and is noticeably proud of what she and the other women of Balama have achieved with the help of little seeds. The women in Balama are just one example of how affected people can take advantage of new opportunities and are capable of adapting themselves to unaccustomed circumstances.