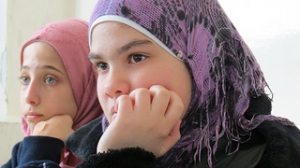 “If you didn’t die from the bombs, you died from hunger.” Abdul Baset Al Buquai had little choice but to leave Syria. His family lived in Baba Amr, a suburb of the city of Homs. It had become the centre of opposition to the government and was levelled in a military offensive last spring.

His house was destroyed, leaving his mother paralyzed in both legs and his young daughter suffering with epileptic seizures. They escaped to Jordan, sometimes travelling by foot, he carrying his injured mother on his back while his wife carried their daughter.

Intesar Fayyad, a 54 year old refugee, also fled from Homs to Jordan. “I was scared for my daughter. Young women were being raped. When eleven of our neighbours had their throats cut in a massacre, I knew we had to leave. Four of them were women, three were children, aged 5, 10 and 12 years.”

Sayed Toqee, a market stall owner in Homs, decided to leave after realising nobody was prepared to save Syria. “I lost hope that help would ever come,” he said.

Syrians like Abdul, Intesar and Sayed continue to pour across the border to Jordan, escaping a two-year civil war which has killed 70,000 people. Numbers making the journey have been accelerating since December. The government estimates that there are 10,000 new arrivals a week, with over 89,000 refugees crossing over since the start of the year.

The country’s main refugee camp at Zaatari holds more than 90,000 refugees and is expected to swell even further. A new camp is to be open soon. But most of the 380,000 refugees in Jordan leave the camps as soon as they can to live in cities and towns.

Rahaf Al Jaber, a 20 year old woman from the Syrian capital Damascus who now volunteers for Caritas remembers her life as a refugee in Zaatari. “We were there 29 days. I counted every single one.” Iman Shami, a Syrian refugee who stayed in a camp and is now living in the town of Mafraq, said, “My son has asthma and my daughter has a heart condition. Life was very difficult for them in the camp with the dust and the wind. Life is much better here.”