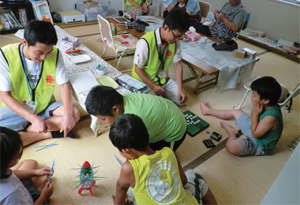 At Caritas bases, children’s play rooms like this one provide gathering places for the local community, places for relaxed conversation.
Credits: Caritas Japan

It’s two years since a massive earthquake and tsunami hit eastern Japan and killed over 15,800 people. Despite an impressive government operation to clean up and rebuild, the disaster has left a dark shadow over many communities which they are still dealing with today.

“Unfortunately, many people who were affected by the disaster have yet to find peace and hope. Instead, they worry that the harsh reality is that with the passage of time their suffering is being forgotten both in Japan and elsewhere,” says Bishop Tarcisio Kikuchi, president of Caritas Japan.

Some 150,000 people in Iwate and Miyagi prefectures were still not back in their homes by the end of December 2012. Caritas Japan says that this precarious state of living has had a very damaging effect on communities.

A Caritas Japan report for the second anniversary says, “Evacuee life destroys communities. Immediately after the disaster survivors were assigned to evacuation centres and were later moved to emergency housing randomly, forced to live in new areas with people they did not know. For example, people on the coast found themselves living inland.” [Download full report].

Communities were no longer glued together by neighbourhood and work and many young people abandoned areas affected by the disaster. This led to further anxiety among the older generation who feared that there would be no one to carry on traditions and family businesses, and no one with the energy to rebuild communities from scratch.

What’s more, social problems which existed before the earthquake, such as alcoholism, domestic violence and divorce, have increased in such an unstable setting.

Caritas Japan has harnessed the boundless energy of volunteers to help repair the damage done to communities by the disaster.

The Sendai Diocese Support Centre was set up five days after the earthquake, and since then Caritas Japan has cooperated with the centre setting up and running volunteer bases in the affected areas.

The Caritas bases provide a comfortable environment for locals to have meetings, concerts, craft circles or just to chat. Caritas staff are available to listen to people either at the bases or to visit them in their homes.

Life in a prefab in winter is not easy for those who no longer have their own homes. Caritas Japan has worked with local authorities and other organisations to carry out a large scale distribution of heating appliances. They distributed around 15,000 heaters in the prefectures of Iwate, Miyagi and Fukushima.

Meanwhile, fishermen’s livelihoods were heavily impacted by the disaster when they lost their boats and nets. Oyster and scallop farms were washed away as well as processing and storage facilities.

Caritas volunteers have set to work repairing nets and helping out with oyster farming. They also help clear debris from farmers’ fields. Seeing their example has inspired local people to not give up hope and to work to rebuild their communities.