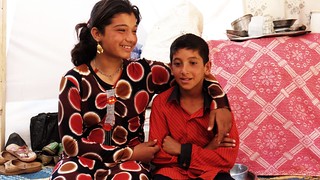 Gharam (11) and Nafeh (10) recently lost their mother and three siblings during the conflict in Syria. Their father brought them to a refugee settlemnt in Bekaa Valley in Lebanon three days ago. He has returned to Syria to work and his cousin is looking after them.
Credits: Nicholson/Caritas

“We had a lovely life,” said Gharam, an 11-year-old Syrian refugee now in Lebanon. “I went to school. I had friends. I was happy.”

That way of life has been torn apart in Syria’s brutal civil war.

Gharam lived Hassakeh in the north-east of Syria. “The most frightening thing was the bombing,” she said. Now her school has been destroyed and she has seen the homes of her friends flattened.

What began with kids writing anti-regime graffiti on a wall in the Syrian town of Deraa in March 2011 has been transformed into a brutal civil war in Syria and the largest humanitarian crisis Caritas is working in today.

There are at least 100,000 people dead, nearly 7 million people in Syria needing aid and 4 million forced from their homes within the country. Over 1.7 million people have fled to neighbouring countries.

But the figures don’t adequately reflect the true cost of the war.

“We lost our mum and we loved her,” said Gharam. “I can’t live without my mum. I need her.” Her mother and three brothers and sisters died in a rocket attack in June.

Gharam now looks after her 10-year-old brother Nafeh in Qab Elias, a makeshift settlement of tents for Syrian refugees in Lebanon’s Bekaa Valley. Her father has returned to Syria, and she stays in a tent with a cousin. 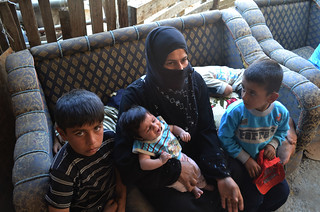 Khatar (42) with some of the 17 children that live with her in an abandoned cow shed in Lebanon’s Bekka Valley since fleeing Syria due to the war. Credits: Eoghan Rice / Trócaire

“We wouldn’t eat if Caritas wasn’t here,” said Khatar. The 42 year old mother of six lives in a cowshed on a farm in the Bekaa Valley. The small room of wood and metal sheeting is home to 25 people altogether, almost all women and children.

“It’s horrible,” she said. “A sewage pipe runs inside the shed. It leaks when it rains. The children are very sick because of the bad hygiene. But it’s either here or we live on the streets.”

Khatar says she is too poor to pay for transport to the nearby Caritas centre, where a medical unit operates. So a Caritas doctor will visit her. Caritas mobile clinics tour the Bekaa Valley to provide health care to Syrian refugees living there.

“We see lots of diarrhoea,” said Dr. Joseph Homsi, who is with the mobile clinic, today in the Caritas centre in Taalabaya. There are many cases of scabies, lice, skin allergies and leishmania, a nasty parasite that causes terrible sores on the sin.

“Most of the problems are due to the unhygienic living conditions,” said Dr. Joseph. Caritas is running health awareness sessions for the refugees, showing simple techniques on how to stay healthy and avoid infection.

One of the biggest problems facing Syrian refugees in Lebanon is the psychological damage of their experiences.

Thirteen-year-old Krist was kidnapped by armed robber with his parents in Syria. “They had guns and their faces were covered,” he said. “They hit my father with the gun and ripped my mother’s earrings from her ears. They said they were going to cut off her fingers to get her rings but she managed to take them off.”

They had become victims of armed gangs looking to profit out of the chaos that has engulfed Syria. Krist and his family knew that they would be targeted again and so made the decision to abandon their home and seek safety in Lebanon. 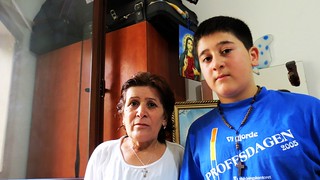 Siham Aho (55) with her son Krist Gourie (13), who survived a brutal robbery by armed gangs looking to profit out of the chaos that has engulfed Syria. They are staying at the Mount Gabriel Monastery in Daher El Souwan, near Beirut in Lebanon. Caritas Lebanon prrovides food kits to the Syrian families and counseling.
Credits: Nicholson/Caritas

Now Krist is suffering from trauma. He has flashbacks of people with long red nails trying to suffocate him. He has phobias about the dark and closed doors, and he has developed nervous ticks.

“Everyone who leaves their country because of conflict is a trauma survivor,” said Caritas Lebanon psychologist Maureen Mahfouz.

Caritas has psychologists in its centres and outreach workers visiting families to offer counselling and therapy if necessary.

“Whenever you have a cycle of violence, you need to cut it at some place,” says Maureen Mahfouz. “That’s why we are here – by offering help we stop the violence repeating itself.”

People start to think positively after treatment or counselling. Children become happier and say they can’t wait to come back to the sessions.

“Our role is to stand by them,” said Caritas Lebanon President Fr Simon Faddoul. “People don’t just need material aid, they also need affection. Our Caritas workers listen to their pain and that regenerates hope in them.”

Caritas Lebanon has helped around 90,000 Syrian refugees so far. But it is just part of the regional story. In Syria, Jordan and Turkey, Caritas is working to help those in terrible need.

In Jordan, Caritas has helped over 110,000 people with aid, including food, housing support, heaters and blankets, counselling and primary medical care and schooling for children. 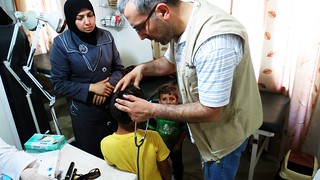 In Syria, Caritas Syria has been able to help 40,000 people in Damascus, Aleppo, Homs, Coast, Jazire and Horan. It works with Christians and Muslims, and its centres are sometimes on the frontline. The main focus is medical support, food, blankets, clothing and help paying rent.

“Against this dark tableau, civil society is leading a secret resistance, We are fighting against the hardships and violence in silence and with dignity,” said Caritas Syria President Bishop Antoine Audo.

The worst could yet be to come. The UN’s refugee agency predicts 3.45 million Syrian refugees by the end of 2013. If major fighting returns to the main population centres of Aleppo or Damascus, the number of refugees could surge.

“The Syria crisis has been one of the most difficult tasks we have ever faced. But I’m amazed by the resilience of the Syrian refugees,” said Fr Faddoul. “Their unrelenting human spirit gives hope back to us.”

If 11 year old Gharam could have anything, she says she’d wish for a change of clothes, a telephone so she can call her father to find out how he is and that she could return to life before the war. For her younger brother Nafeh, he wishes for a toy car, a pet bird and “to live in peace”, a prayer we can all share.