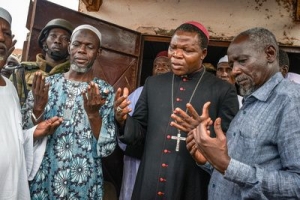 Read this in French

Central African Republic has descended into anarchy after rebels seized power in March. The situation has recently deteriorated with popular militias being formed to defend the local population against the rebels, sparking a cycle of retaliation. Marina Bellot of Secours Catholique (Caritas France) spoke with Caritas Central African Republic President Archbishop Dieudonné Nzapalaing of Bangui about the crisis in his country.

In June, you said that Central African Republic was slowly dying. What is the situation today?

On 24 March, President François Bozizé was overthrown by a coalition of rebel forces called Seleka. Many of the rebel forces come from outside the country, from Chad and Sudan. The coup d’état came with promises of freedom and peace, but that was quickly replaced by disillusionment among the people.
We have never witnessed such widespread looting. There have been rapes and execution in full sight of everyone. We are accustomed to coups here, but normally they last for two or three days and the leaders of the ousted regime are the only ones who suffer. The current crisis has been going on for four to five months and the whole country is in pain.

It was saddening that rebel fighters looted and vandalized our churches. In some dioceses, all our vehicles were stolen in front of the bishop and priests, who were helpless to prevent them. Now, our pastors have no transport to reach the population.

We’re not surprised that people are fighting back in what I call a “revolt of the poor”. They are desperate, they have lost their parents, their children and their homes. What else do they have to lose.

The United Nations children’s agency UNICEF has expressed concern about the use of child soldiers.

Young people are suffering the most in the crisis. There have been no schools since December. Teachers with links to the former government have been hunted down. They have fled, leaving the children to fend for themselves. Some have been recruited as child soldiers, swapping their pens for Kalashnikovs. How will we be able to get them back to school? This is a lost generation.

The Seleka rebellion has broken down our civil order. The rebels have sought to exploit religious difference in the country. Many of the fighters, especially those from Sudan and Chad, are Muslim and speak only Arabic. They speak only with our native Muslims, giving the guns and inciting them.
People equate Seleka with Islam. But that is dangerous thinking. This is not a religious conflict but a political crisis. That different faiths live side by side is a reality of this country. Our history of co-existence and soial cohesion should not be destroyed. But today everyone lives in fear of the other.

What role can the Church play?

Muslim, Protestant and Catholic national religious leaders work together to defuse tensions and explain that the crisis is political. We also train grassroots mediators to reduce conflict in communalities.

The Catholic Church provides aid to those in need. Caritas gives food and clothes and has provided seeds for replanting.

Do humanitarian agencies have access to people in need?

Most aid agencies are unable to leave the capital Bangui because of the danger. In September, two aid workers were killed. We need secure humanitarian corridors so that we can reach all the people.
What can the international community do?
The African Union peacekeeping mission MISCA must be strengthened. Some African countries would like to participate but don’t have the financial means to do so. We want the UN to strengthen its presence. We need security so that people don’t live in fear and can go about their daily lives.

Can the crisis be dealt with by the national government?

The president’s authority is weak. His support is not strong. His generals don’t obey him. The soldiers obey their generals. This is anarchy.
The government has no money. Civil servants haven’t been paid for three months. There aren’t chairs or computers in offices. How can they do their jobs?

Elections must be held in within 18 months. We must do everything to ensure this happens.