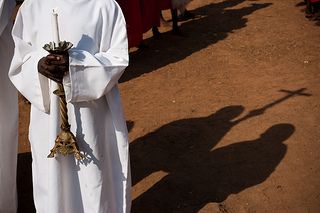 Young seminarists take part in a ceremony as people sheltering in Catholic compound attend a mass at the Cathedral in Bossangoa. Photo by Matthieu Alexandre/Caritas

The Central African Republic has just celebrated the first anniversary of the rebellion initiated by the Seleka coalition. What a strange kind of anniversary, you might well say. Undoubtedly, the change promised by these merchants of delusion has brought only suffering and hardships to the severely afflicted Central African people.

They have been subjected to the worst one can imagine: rape, killing and murder, kidnappings, ransom demands, destruction of property, cattle theft, burning down of houses and villages, acts of vandalism, destruction of municipal records, looting and ransacking of almost all ecclesial facilities, desecration of churches and all kinds of violent acts.

The picture is bleak. Distress is all around. Organised crime has increased twofold and the crooks don’t even bother to cover their faces anymore. They’ve all joined the Seleka rebel forces and awarded themselves military ranks that they show off with arrogance and a great deal of pride.

This is the backdrop against which the diocese of Bossangoa is moving forward. The numerous acts of violence and violations of human rights have aroused feelings of indignation that have driven people provoked to organise self-defence groups called Anti-balaka (anti-machetes).

Military clashes between Seleka and Anti-balaka always end up with acts of violence against the civilian population. This criminal tendency has been favoured by both the parties present. Christian and Muslim communities are taken hostage and become de facto victims of these angels of death.

It’s crucial to get away from this unfortunate combination which consists of lumping together the Anti-balaka with Christian movements and the Seleka with Muslims. Indeed, not all Anti-balaka are Christians, and not all Christians are Anti-balaka. And the same goes for the Seleka and Muslims.

This tit-for-tat cycle of reprisal has dispersed many people into the bush, claimed a huge number of human victims, destroyed assets (fields, herds of cattle, houses, crops, etc.) and led to displacement of people.

The picture of 35,000 displaced people in the diocesan compound of Bossangoa has gone round the world. The town is now reduced to two areas: the diocesan compound where almost 50,000 people are gathered, and the Ecole Liberté in the centre of town where 8,000 displaced people from the Moslem community have sought refuge. It doesn’t get enough coverage, but the situation in Bouca is almost the same with around 3,500 people in the Catholic mission.

In the attempt to break people’s spirits, they have been subjected to real psychological torture. This is what the displaced people in the diocesan compound in Bossangoa and the Catholic mission in Bouca have been through. These people who have escaped death are taunted all day long by warlords.

They endlessly threaten to launch attacks with heavy weaponry against the diocesan compound and the displaced people holed up there. The latest threats followed the attack launched by the Anti-balaka on the city of Bangui on Thursday 5 December 2013. Thank God the Congolese components of the Multinational Force of Central Africa (FOMAC) showed exceptional bravery and professionalism in protecting the civilian population in Bossangoa, regardless of people’s political, philosophical and religious beliefs.

The coup on 24 March 2013 plunged a wounded and dependent country into the depths of the abyss. The workings of the state are at a standstill, institutions are worn out and the economic fabric has been completely destroyed.

The Central African Republic has become a shadow of its former self. It’s now facing up to one of its worst demons. It’s a failed state that has abandoned its citizens to the mercy of hordes of mercenaries and outlaws.

How can a country on its knees be rebuilt? There are no hospitals and the schools aren’t operating. The future has been quite simply sold off by adventurers and shady politicians with dubious consciences. Future prospects are gloomy and uncertain. Reconstruction will be burdensome.

Regarding the diocese, the toll so far has been heavy. The assessment is alarming. As well as the organisations directly connected with pastoral care, healthcare and educational facilities have been ransacked and vandalised.

The military and political crisis that has affected most of the diocese since March has prevented us from appropriately deploying our pastoral care project in public health, education and vocational training programmes. However, we are now past-masters in emergency management. We would like to thank everyone who financially supported help for the disaster victims.

The socio-political situation appears to be desperate. However, the period of Advent prepares us for celebration of the happy event of human history: God became one of us in his smallness, humility and fragility. He raised us up from our decline to fill us with his glory.

I’m confident that this hope will not be disappointed with respect to the Central African people. The Lord who leans towards poor people, orphans and widows will certainly wipe the tears from the eyes of these children and bring them his joy.

In hoping for this revival, I wish you the very best for the holy Christmas period.