One wave, one human family, food for all 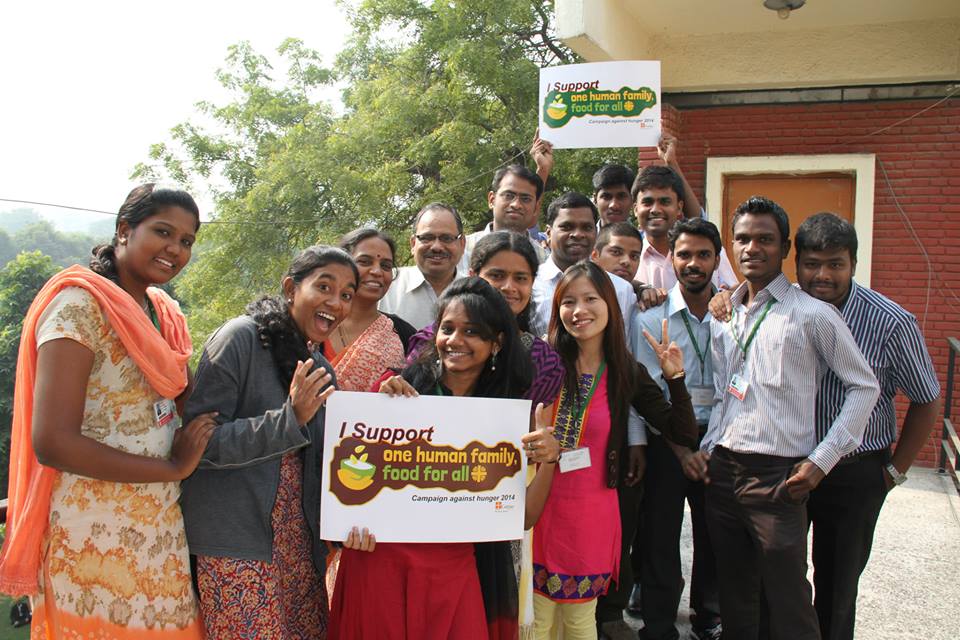 Caritas members from around the world take part in the Food for All campaign. Credit: Caritas India

Caritas has given me a crash course in geography and now I know where Rarotonga is …among other places. For the first time ever the whole confederation has launched a global campaign against hunger “One Human Family, Food for All”.

From Rome we organised a “wave of prayer” in which Caritas organisations from all over the world prayed against hunger starting at midday in Samoa and ending in Rarotonga, home to Caritas Oceania coordinator, Tim Walsh. I’ve been sticking dots on a Google Map for weeks to chart the growing number of organisations who said they’d like to participate.

The idea of the wave of prayer was to give Caritas organisations and all those participating a quiet time of reflection on why we should even be bothered about ending hunger and about ensuring the right to food is implemented. The wave was helped along by a five-minute video message from Pope Francis.

“We are in front of a global scandal of around one billion – one billion people who still suffer from hunger today. We cannot look the other way and pretend this does not exist. The food available in the world is enough to feed everyone,” said the Pope.

Caritas organisations such as India, Development and Peace in Canada, CRS and CCUSA in the US, mobilised dioceses throughout the country to pray. Caritas Benin planted a tree to mark the campaign launch, Caritas Luxembourg organised for archbishop Jean-Claude Hollerich to distribute food at a Caritase homeless shelter and celebrated mass afterwards.

The fact that Caritas is not just a confederation which can launch global awareness raising around hunger, but also works on the parish level means that it’s working at the very heart of hungry communities.

Speaking at the press launch of One Human Family, Food for All, Caritas Internationalis Secretary General Michel Roy said, “Caritas wants to use its potential of reaching out to communities and parishes to raise their awareness, give them a voice and encourage them to contribute to the necessary changes. We do believe in the capacity of the poorest farmers to produce the food they need for themselves and for their communities.”

Apart from working on projects that help the hungry and advocating for their rights, Pope Francis said in his message that we need to take a good long look at our own lives.

“This campaign is also an invitation to all of us to become more conscious in our food choices, which often lead to waste and a poor use of the resources available to us,” said the Pope. “It is also a reminder to stop thinking that our daily actions do not have an impact on the lives of those who suffer from hunger firsthand.”

The name of our campaign was chosen by the whole Caritas confederation. One Human Family, Food for All, illustrates a key aspect of ending hunger: we can only do this together. That means not just Caritas but a global effort to ensure the basic dignity of having the right to food is protected.

The was echoed in the message Cardinal Peter Turkson sent to the launch press conference: “Very soon, Pope Francis will shed yet more light on the global campaign against hunger, because the central theme of his message for the World Day of Peace on the 1st of January is Fraternity as the foundation of peace and the pathway to peace. As applied to this campaign, we can say that fraternity is the key to solving world hunger and providing food for all.”

Starting in Samoa and passing through all the continents and ending in back in the Pacific on Rarotonga, Caritas has joined hands as one family and has said no to hunger. Now let the work begin.