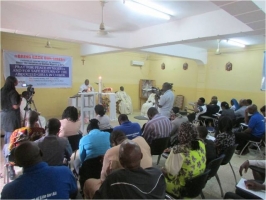 The Catholic Secretariat of Nigeria through Caritas Nigeria and the JDPC have joined Nigerians and the world in the #BringBackOurGirls campaign for the safe return of the abducted school girls in Chibok.

On the 14 April, the principal of a secondary school in Chibok in Borno State reported on the abduction of approximately 230 female students. They were in school to take their exams.

According to a video released on YouTube by Abubakar Shekau the Islamist militant sect leader, Boko Haram has claimed responsibility for abduction of these girls. His rational is that “the girls shouldn’t have been in school in the first place”.

Lending its voice to the #BringBackOurGirls campaign, Caritas Nigeria organised a one day prayer session at the Catholic Secretariat of Nigeria on 6 May. Close to a hundred people prayed for the safe return of the abducted girls and for peace in Nigeria.

Caritas Nigeria said, “Our compassion goes towards the abducted children and their families. We pray for speedy rescue and will continue to say our intercessory prayer for the safe return of the abducted girls and for peace in our country. ”

The Secretary General of the Catholic Secretariat, Rev. Fr. Ralph Madu during the Mass emphasized the need for everyone to engage in constant prayer for the return of the girls, as all efforts seem not to yield fruit. The President of the Nigerian Bishops Conference earlier requested all bishops to set up prayers in their dioceses.

During the prayer session, Executive Secretary/CEO Caritas Nigeria Rev. Fr. Evaristus Bassey said, “It is important at this time in the history of our nation, that we avoid hate speech. Hate speech will not resolve anything.

“We must come together as both Christians and Muslims, join our hearts and minds together and call on God to preserve the unity of our country Nigeria; for what seems to be the reality is that powerful forces are driving a sharp knife through the heart of this nation and want us to begin tearing one another into pieces”.

[Tweet “It’s immaterial whether the girls missing are Christian or Muslim. They are human beings.”]

Boko Haram in Nigeria was formed in 2002 by a Muslim cleric Mohammed Yusuf in Maiduguri, the capital of Borno State. He set up a religious complex which included a mosque and an Islamic school.

The group started launching attacks on government buildings and individuals killing scores of people in the North East and North Central States in Nigeria after Yusuf was killed by the Nigeria security forces and Boko Haram declared finished.

Unfortunately, there were other members of the group who continued with sporadic attacks on security forces, at first as a means of avenging the summary execution of their leader. These attacks graduated to soft targets such as churches, mosques, parks, with scores of innocent civilians left dead. Boko Haram has now killed more than 10,000 since its inception. 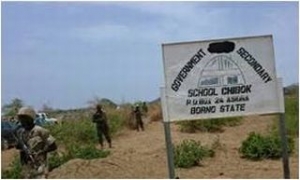 Soldiers near the school where 200 plus girls were seized.

On the abduction of the Chibok girls, President of Nigeria, Dr. Goodluck Ebele Jonathan, during the presidential media chat 4 May, promised Nigerians that the government would do its best to ensure the safe return of these girls.

Many Nigerians seem not to have confidence in these assurances. There have been many demonstrations by parents of these children, individuals, civil society organisations, celebrities and heads of businesses to demand the safe return on the #BringBackOurGirls hash tag campaign.

Parents of these children have even constituted a search team that went into the Sambisa Forest in Borno state where it is believed Boko Haram have their camp and are holding the children captives.

Demonstrations were held in the country’s capital Abuja on 1 May and similar protests have also been held in Lagos and Borno states and outside Nigerian embassies in many countries. The social media is not left out in this campaign as Nigerians and other countries have used this tool to cry out in appeal for help for these girls.

Nigeria has also experienced a show of love from other nations who have joined the campaign urging the government to do something fast for the safe return of these girls.

In the midst of all this, many Nigerians are concerned about the fact that it is more than three weeks and the girls are yet to be rescued. They have been appealing to heads of government of other countries to come to the aid of Nigeria. There has also been pressure on the president to call for help from countries like the USA and Britain.

Caritas Nigeria is working with local diocesan Caritas to bring relief to displaced families in the North East region, as many rural communities are deserted because of attacks or fear of attacks by Boko Haram. Caritas conducted an assessment in which possible locations of cash transfer programs could be carried out, as it is dangerous to bring in food and non food items into the area. Caritas Nigeria is asking for help to respond effectively to the magnitude of humanitarian crises in the region.