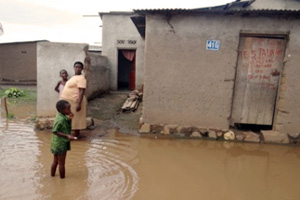 A woman and a child in front of a flooded house in Bujumbura in February 2014. Credit: Caritas Burundi

It’s the first time a disaster like this has occurred in Bujumbura. On the night of 9-10 February 2014, a natural disaster hit the Burundian capital. Rain fell incessantly on the city and the surrounding area for almost ten hours, causing rivers to rise and landslides. The working-class neighbourhoods of Kinama and Kamenge in the north of Bujumbura were among the worst affected areas.

Around 24 people died during the bad weather. By midday on 10 February women were still looking for their children who had disappeared or been swept away by the floods. Police vans took the corpses found in devastated buildings to the morgue.

More than 4,967 households were affected and the disaster led to widespread damage in a region where livelihoods were already precarious. Thousands of houses collapsed, as in many cases they were made of mud bricks that did not resist the raging waters. In Kinama, the water rose to a level of 1.7 meters. Bujumbura’s main road network and the two major roads to the Democratic Republic of Congo and Rwanda were cut off.

As of the afternoon of Monday 10 February, Caritas Burundi organised delivery of emergency relief to the victims. A team of Caritas doctors gave first aid to those in need.

Jérémie Kubwimana, who has been staying in the parish of Kamenge de Gatunguru since 10 February, said “We would like to thank the benefactors, including Caritas Burundi, who gave us many kinds of aid, especially the gruel that was a great help in feeding our children, as well as kitchen utensils (buckets, plates, spoons, glasses), and of course sheets and blankets for protection against the cold. Overall, the aid we’ve received has been very useful.”

CRS, the United States Embassy, UNICEF, Sports Without Borders, Terre des Hommes, US AID and the Red Cross took part in the efforts at the reception sites to deal with the disaster. 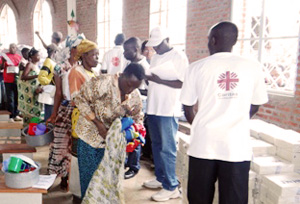 On 11 April Caritas Burundi launched an emergency appeal for the rehabilitation of 12,000 displaced persons gathered at the Kinama I and II, Buterere I and II, and Gatunguru reception camps. The rehabilitation project comes within the scope of socio-economic rehabilitation of natural disaster victims, and will be for the duration of one year (until 30 April 2015).

The project will help most vulnerable victims: vulnerable households with a plot of land who through a great deal of effort were able to build themselves a small house; elderly people and orphan heads of household who were tenants in small houses that were destroyed; households with a small income-generating activity or a small business; injured people who are still hospitalised and victims of the disaster who lost everything. The aim is to avoid their staying in reception sites on a permanent basis, while they still have the strength to work.

Among the forms of planned aid,there will be small loans, banking system for the poor or revolving loans, education fund for children, the rebuilding of at least one hundred small houses, and contribution towards prevention of the causes of natural disasters affecting this area.