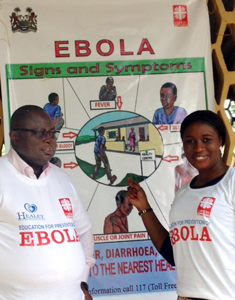 At a workshop in Sierra Leone, Caritas leader Father Peter Konteh stands near a poster about Ebola symptoms. Photo by Caritas Freetown

Using the expertise gained through years of tackling HIV, Caritas and Catholic Church staff are combating Ebola as the deadly virus spreads in Africa. The diseases are different, but the way to spread information about them is the same.

“We have 19 radio stations we use for HIV messages,” said Sr. Barbara Brillant, dean of a college of health sciences in Monrovia, the capital of Liberia. “We can use them to broadcast information about Ebola.”

Existing diocesan networks and the college graduates now working in rural clinics are key resources. “We told them not to forget the HIV patients,” she said. “But to refocus the educational energy and preventive energy into Ebola.”

Along with training people in prevention, Caritas field teams are distributing soap and chlorine. Communities trust the messenger because information is coming from already-existing networks that fight HIV.

“This is the natural vehicle to disseminate information about Ebola, because our programmes are rooted in the community,” said Msgr. Robert Vitillo, who is the Caritas Internationalis liaison with the World Health Organisation.

In Sierra Leone, Caritas is teaching parish volunteers how to teach others about hand washing and more. Caritas gives training to traditional healers as well as to other primary healthcare providers and to undertakers. The training covers safe burial practices in remote areas, where there are no hospitals or health centres.

In both rural and urban areas, Caritas seeks out people who may not know how Ebola is transmitted. “We identified 11 communities just outside Freetown, the capital, and realised they had not received information as they don’t have access to TV,” said Fr. Peter Konteh, head of Caritas Freetown.

Caritas helped produce a song whose lyrics describe prevention. “We produced the music and want to give it to taxi drivers,” said Fr. Konteh.

The priest is working to find homes for Ebola orphans, children whose parents recently died of the disease. “Communities might think we’re bringing Ebola to them and they might panic,” he said, speaking about the need for greater public education.

People who work inside hospitals face enormous challenges even when they are at home. “Health workers are being kicked out by their landlords, who say ‘You’re putting our community in danger,’” said Fr. Konteh.

“Most of them are not going to work at the hospital so they can keep their houses. They come back home, people are moving away from them,” he said.

In places where the initial phase of the disease caused panic, partners are trying to get back on their feet. “The Church has a lot of clinics in Liberia and we need to get these back up and running,” said Sr. Barbara. “Many people are dying from simple things as well, not just Ebola.”

Lack of protective gear for medical personnel is a huge problem. “A doctor from the USA is coming to volunteer with us, bringing three suitcases full of gear,” said Sr. Barbara. “I said, ‘Fill up what you can.’”

“Most of the material sent from other countries goes to the government. I don’t have a problem with that, but we also need to respond to faith-based institutions,” she said.

“WHO is working to get materials to affected countries, and we hope those resources will be shared with faith-based groups,” says Msgr. Vitillo.

Caritas staff are worried about rising prices for both preventative gear and staple needs. “Food’s going to be a problem,” said Sr. Barbara. For families living in areas closed off by the government, it’s even harder to get the basics.

In the Democratic Republic of Congo, where cases of Ebola have been reported, some families are moving away from places they think are infectious. Caritas Congo is planning to bring these families food and other essential supplies.

While Caritas is focusing on preventing the disease, many staff—particularly priests and sisters—also are comforting the bereaved, especially when funeral rites are not done according to custom for health reasons.

“We have traditions and prayers that don’t take away the loss, but help people live through it,” said Msgr. Vitillo. “We can continue to pray for them, remember, memorialise them, even if the body is not present to us.”