To enter Hamadia camp in Sudan’s Central Darfur Darfur region, you cross a flat lunar like landscape mud brick kilns rise out of the sandy earth like moon craters.

The kilns are run by casual labourers. It takes two days to make 1,000 bricks which sell for about forty Sudanese pounds, the equivalent of 7 Dollars. 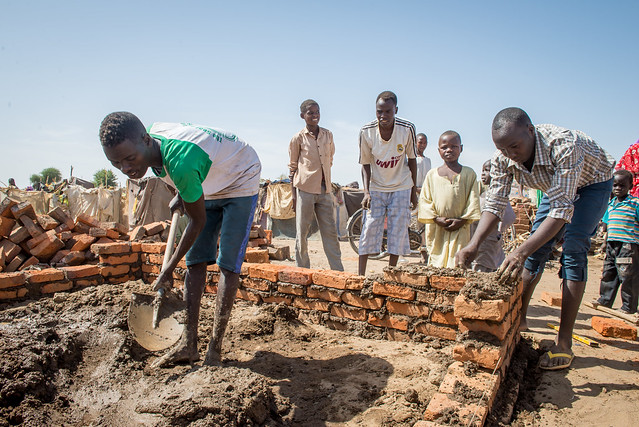 The Hamadia camp hosts more than 68,000 people, and over the ten years NCA has seen the changing nature of the camps from temporary makeshift tents to more permanent mud brick dwellings. Photo credit: Annie Bungerouth/ACT-Caritas

There are donkey’s everywhere, tethered to wooden jalopy carts waiting to transport the sold bricks and their owner.

The environmental impact of firing up the kilns is evident – the tree population is decimated, there is no protection from the searing heat of the sun’s rays or the seasonal Haboub – sandstorms. I’m told that when the Haboub winds are ‘high’ it can lift your feet off the ground.

We drive through the camp’s winding dirt tracks park the 4×4 vehicle and do the rest of the journey on foot. Children follow us ‘Pied-Piper-like’ calling out to their friends to join their snaking line. One of the local Sheiks comes out and shoos them away, they scatter as quickly as they had appeared.

Caritas’s partner Norwegian Church Aid (NCA) has been running their life-line aid programmes in the Darfur region for ten years. The Hamadia camp hosts more than 68,000 people, and over the ten years NCA has seen the changing nature of the camps from temporary makeshift tents to more permanent mud brick dwellings.

People are finding it increasingly difficult to return to their villages because of the ongoing conflict between government and rebel groups and the inter-ethnic fighting between tribes, and so they are doing what they can to make a life for themselves inside the camps.

We’d arrived at a clearing, almost an oasis of tranquility, but for the noisy generator pumping water across a landscape of patch-work quilt small plots of land, growing a mixture of animal feed and food, such as Sorghum and Okra. The generator is supporting the solar panel irrigation system that waters the plots of land.

Mohammed* straddles his rows of newly planted sorghum, his small weeding tool – known as a ‘kiering kwie’ glints in the sun light as his hands expertly pull out the weeds. He stands up straight, sweat gently rolling down his brow, and surveys his work. He’s satisfied.

“I learnt these skills [weeding] as a young boy in my village; we were all farmers, growing food for our families and to sell in the in the market, it was a peaceful life.

“I left six years ago because men came with weapons and burnt everything.” 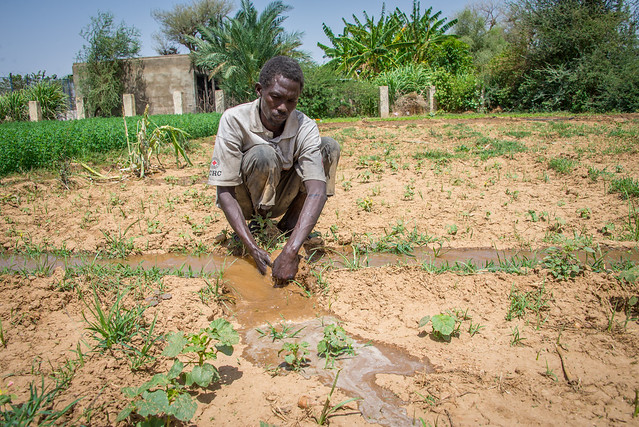 Mohammed* has been able to grow enough food for his family and also earns money from his crops. Photo: Annie Bungerouth/ACT-Caritas

Farming is the traditional way of life for many rural Sudanese. But, people who have been forced from their homes because of conflict lose everything – their valuable assets; land, livestock, tools and seeds.

NCA have been a driving force behind supporting camp communities to become more self-reliant. They’ve encouraged the setting up of farming cooperatives – women, men, young people and vulnerable families – come together and divide up the land into sections. They work together tending their plots that make up about fifteen hectares of land, per cooperative group.

There’s a savings system whereby each plot owner contributes to the rental of the land.

NCA works with farmers like Mohammed and his family, by providing support with training on better soil and land cultivation to improve crop yields, as well as with seeds and tools.

There are challenges; those with plots of land further away from the pumping station don’t always get enough water to irrigate their crops, so they have to resort to transporting water via donkey.

Mohammed has been able to grow enough food for his family and also earns money from his crops. He grows donkey feed – around six to eight bags per crop – which he sells in the market for around 300 Sudanese pounds and he grows okra and sorghum for the family food basket, any surplus he also sells.

“In the first days when I arrived here, I had nothing; there wasn’t even any source of water. I had to rely on WFP for food. Those were dark days, not being able to provide for my family. I’m content now that my hands are busy growing food.

“NCA has restored my dignity. I feel proud when I survey my crops.”