World needs to act on Iraq 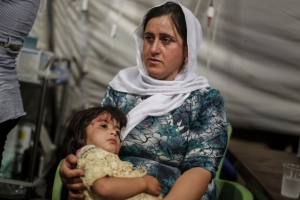 A Yazidi woman and her injured child. Hundreds of thousands of religious minorities including Christians and Yazidis have fled extremists in Iraq.
Sam Tarling for Caritas

More than 1 million people have fled their homes in northern and central Iraq as Sunni Muslim extremists calling themselves Islamic State have seized Ninewa, Salah Al-Din and Diyala provinces. Many of those who have fled are Christians, Yazidis and Shia Muslims. They have been singled out for attacks.

The conflict has led to the closure of Caritas Iraq’s centres in Qaraqosh, Bartilla and Alqosh. Many of the Caritas Iraq staff are now in Erbil supporting distributions to people now housed in church compounds and other centres.

Working with CRS, Caritas Iraq has also begun providing aid in the Dohuk and Zakho close to the Turkey and Syria borders. There are hundreds of thousands of people in need there – both Yazidi and Christian.

This huge humanitarian crisis in Iraq has forced many families to leave without their possessions or the basic necessities to survive. They are desperate and frustrated. They lack hope that the world will move fast enough to end this humanitarian tragedy.

After extremist groups seized the cities, families including Caritas staff had to flee for their lives without being able to bring anything. Some have headed to the Kurdistan region. They have had to wait 8 hours in checkpoints due to overcrowding. This is the first time that Caritas Iraq staff have had to leave their humanitarian mission and their daily dealings with the poor. It has left a pain in our hearts.

Thousands of families are living in parks, unfinished buildings, churches and schools. They are having to cope with the high Summer temperatures. They have no resources. Their most urgent need is shelter.

Caritas Iraq has received great support, including from volunteers on the ground. We are able to provide food, health and other basic aid to 7000 families. We’re working with parishes to be able to reach those in need in places like in Ain Kawa, Zakho, Dohuk and the surrounding villages.

The moral and financial support and encouragement has been simply great. This is one of the few positive results from this crisis. We felt that we aren’t alone and this has given us new strength to support the displaced people despite all the difficulties.

We believe the whole situation will not get worse because the international community and the Peshmerga Kurdistan army in Erbil will not allow this to happen.

This is the point to reflect over what is happening. It’s the beginning of a negative trend of peaceful coexistence. It will have a bad impact in the long run. It will lead to the collapse of pluralism and the loss of confidence between different groups in the country.

The whole world must move together with the government and people of Iraq and international organisations to take a firm stand against this catastrophe. It’s a crisis where the dominant feature is a violence that will that will turn everywhere into a jungle.

The international community must stop the supply of weapons reaching the militants. They must unify their efforts to stand more firmly against violence and terrorism. Facing this issue now is better than providing aid to those forced to flee extremists.

Support the work of Caritas Iraq