Caritas leaders said that ending hunger by 2025 is an achievable goal if we support family and small scale farming during Caritas Day at the Milan 2015 Expo.

“Caritas organisations across the globe embraced the ‘One Human Family, Food for All’ campaign when we launched it with Pope Francis’ support in December 2013,” said Cardinal Oscar Rodriguez Maradiaga, outgoing president of Caritas Internationalis. “Today we see the fruits of a year and a half of work on behalf of the hungry.”

“We are One Human Family united by hunger,” said newly elected Caritas Internationalis president Cardinal Luis Antonio Tagle. “It is not just about food but it is the same hunger that unites us.” 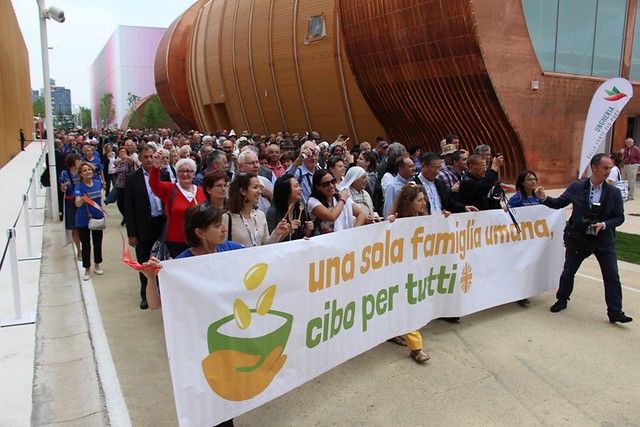 Caritas delegates from around the world marched to end hunger during Expo Milan 2015. Photo by Caritas

More than 150 Caritas leaders from around the world attended Caritas Day at the Expo, bringing examples of the work they have done—from training farmers to building irrigation systems to urging wealthier governments to change laws. Representatives from six continents spoke about challenges farmers face, such as land grabbing, high loan rates, or privatised seeds.

The delegates, along with hundreds of people from the Milan diocese, crowded an Expo auditorium to hear more about what works to stop hunger. Roundtable experts joined rural farmers to share experiences and best practices. Through presentations, videos, and music, the Caritas “Food for All” campaign came alive.

During the “Caritas Day” events at the Expo, Cardinal Rodriguez Maradiaga and Cardinal Tagle  unveiled an independent Food Study of Caritas organisations in 98 countries. The survey asked Caritas field workers what works and what is needed in the future. The report pointed clearly to the need to support small family farmers with access to resources like land, water, seeds and credit. The report also said that low agricultural productivity and the impact of climate change are keeping people hungry.

The day ended with a parade along the Expo main street, with Caritas supporters and staff carrying symbolic spoons and “Food for All” banners in several languages as a band played “When the Saints Go Marching In.” Ending at the Caritas stand at the Expo, paraders gathered around the number 805 written with stones, commemorating the 805 million people who do not know where their next meal will come from. The stones were rearranged so that the number 805 became zero.