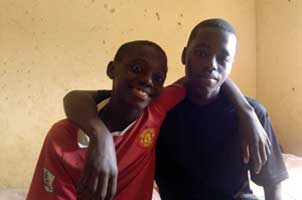 Ali (11) and Akim (8) fled the war-torn Burundi alone to Swaziland where they receive help at the Caritas run Malindza centre. Photo by N.Sabbetti/ Caritas Swaziland.

Ali was 11 and his brother Akim was just 8 when they arrived alone in Swaziland in 2010. They remember little about their long journey here from their native Burundi – or maybe they prefer not to talk about leaving their home and what happened to their family. “We don’t have any parents,” the boys say.

“But we do remember that then we had two brothers. They died in the war. We’re scared of war.”

It’s a lot for children to bear. But both Ali and Akim are resilient and determined to make the most of being safe in Swaziland now. The brothers share a room at the Malindza Refugee Reception Centre in the east of the country, close to the border with Mozambique. Caritas Swaziland assists unaccompanied migrant children and adolescents at the centre as part of a three-way agreement with the United Nations High Commissioner for Refugees and the Swaziland Ministry of Home Affairs.

Ali and Akim clean and wash for themselves, cook their own meals using food the Malindza centre gives them. They also enjoy playing football there and at the local school, where they have been enrolled. Ali says “I am grateful to be able to attend lessons – I love English and dream of being a teacher.” Akim is also studious according to staff at the centre. He especially enjoys maths and science and has inspiring ambitions. “I want to be a doctor one day,” Akim says, “but that’s if I can make it to university. Refugees have to pay fees then and we don’t have parents to help us.” 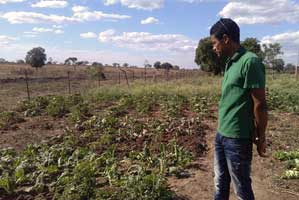 Staff at the Malindza Refugee Reception Centre in front of the centre’s garden project. Photo by N.Sabbetti/Caritas Swaziland

The right to “life, survival and development”, to “education and health care”, to “participation” are all protected under the Convention on the Rights of the Child which is commemorating its 26th anniversary. The Convention broke new ground back in 1989 when it created a universal set of standards specifically for children – be they migrants, refugees, orphans or living with their families. It has become one of the most widely adopted conventions ever and has made signatory countries legally bound to protect the rights of children. Under the Convention, children have their own rights as minors, in addition to the fundamental human rights which should be enjoyed by all people.

The government of Swaziland has respected the rights of children such as Ali and Akim in allowing them to stay at liberty in the country and enrolling them in the local school. Other countries have been criticized for detaining unaccompanied children, who like Ali and Akim arrived not only without their parents but also without any legal documentation. In Swaziland, the right to education isn’t fully protected however, as most unaccompanied children arrive after the school year has begun and cannot be admitted for months. Ali and Akim are both still in primary school – a testament to how much of their education has been lost on their journey to find a safe place to grow up in. Both boys say they can’t remember how long they took to travel the three and a half thousand kilometers from Burundi to Swaziland.

Jeremiah tells a similar story. He’s also at school in Malindza, and at age 17 he is also in the primary classes due to the disruption to his education. Jeremiah didn’t arrive at the refugee center alone though. He came with his parents and siblings when renewed fighting in his native Democratic Republic of Congo forced them to flee in search of sanctuary. After some time in the Malindza center everyone else moved on but – seeing a chance to stay at school and study – Jeremiah remained behind alone. “I thought it was a good decision at the time” he says, “but now I have no idea where my family is. I am alone here and when I turn 18 soon I will legally be an adult. But I’ve not had a proper childhood to learn how to survive alone.” 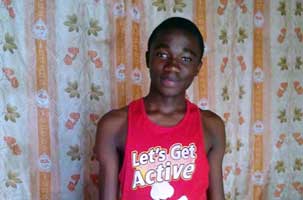 Jeremiah (17) stays in Malindza centre so he can have a chance to stay at school and study. Photo by N.Sabbetti/ Caritas Swaziland

Jeremiah’s room in the Malindza centre shows all the heartbreaking signs of someone trying to make a real home for themselves. It is clean and tidy and Jeremiah cooks his own meals. He’s a youth member of the Malindza centre’s garden project, which is run by a Caritas Swaziland staff member there. “I don’t know what I shall do in the future, “ says Jeremiah, “but right now, I have safety and security, I have food and a room and I can go to school. I enjoy it – English, maths and social work are my favourite subjects. Maybe one day I can use them to help other people in the same way in which Caritas has helped me here in Malindza.”

At the moment, there are 14 unaccompanied children at the centre – 9 boys and 4 girls. Caritas Swaziland focuses on providing them with food, shelter, water and sanitation while making sure they have access to health and psychological care. Through Caritas’s partnership with government ministries, the children are given legal documentation, education within the local community and the support of a social worker whose job it is to protect their rights, enshrined in the Convention on the Rights of the Child.