Lesbos hotel where guests are refugees 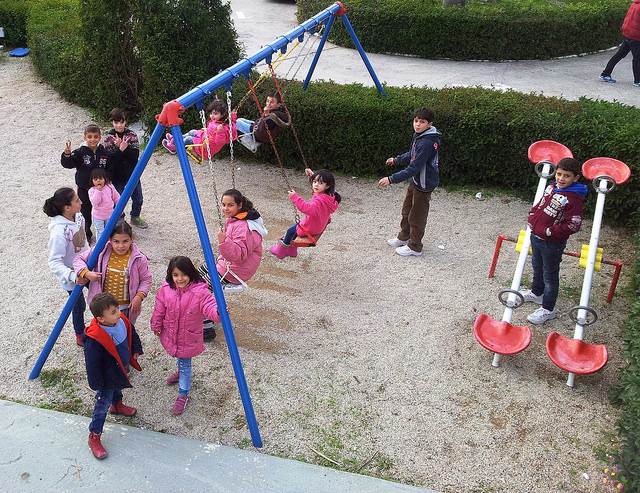 “Everything is beautiful,” said Hadija, a 25 year old Syrian mother of a three month old baby. “I’m very happy to be here.”

She is staying at a hotel on the Greek island of Lesbos. Normally it is filled with tourists. Now, with the support of Caritas Switzerland and Caritas Hellas (Caritas Greece), the hotel has opened its doors, its 236 beds and 88 rooms to refugees and migrants arriving by sea on the island.

Lesbos has been at the epicentre of the exodus of Syrians, Afghanis, Iraqis and others fleeing their homelands for a better future in Europe.

“We fled war in Aleppo in Syria to Turkey,” said Hadija. “In Turkey, you couldn’t work so life was very difficult. My husband left for Germany and now I’m following him.”

Of the almost one million refugees and migrants who have come to Europe in 2015, over 467,000 people have made the short but dangerous trip across the Mediterranean Sea from Turkey to Lesbos.

“There were too many people on the dinghy,” said Hadija, of her 4 hour trip across the sea. “We were all soaked. The baby was wet through. I was so scared that we would die.”

Once she arrived in Lesbos, volunteers meeting the incoming boats referred her to Caritas and the hotel staff once she had registered.

“We provide shelter to vulnerable refugees,” said Tonia Patrikiadou, Field Manager for Caritas Hellas (Caritas Greece). “We give rooms to the elderly, pregnant women, new mothers, women travelling alone, families with lots of children, the disabled and people who are ill.”

The alternative would be to sleep in a tent in a camp with limited facilities or out in the open.

As well as a warm and safe place to sleep, the refugees get two hot meals a day, they can wash their clothes or get new ones, children can play, there is counselling and they get basic information in Arabic or Parsee for the rest of their journey.

The hotel works with a local hospital so there are doctors on call 24 hours a day. Hadija and her baby were both checked by a medical staff.

“The pregnant women, women travelling alone and new mothers are exhausted and scared when they arrive,” said Tonia Patrikiadou. “But the next day after the have washed and rested, you see them at breakfast and they’re happy. They could be normal guests at any hotel, not refugees who have been through war.”

They stay for 1-2 days before making their way to Athens by ferry, and then by train, bus and foot across Europe to Germany, Sweden and northern Europe. Refugees who are extremely vulnerable are given the option to stay in shelters run by partner ngos.

Although the number of people arriving peaked in October, still around 1800 a day land on Lesbos.

“The trip has become more expensive and the weather is worse so less people are travelling,” said Tonia Patrikiadou, Field Manager for Caritas Hellas (Caritas Greece). “But they’re still going to come. They want to come to Europe.”