International conference on human trafficking within and from Africa

One Human Family, One Voice, No Human Trafficking

Caritas is committed to fighting against the sale and trafficking of men, women and children into slavery as beggars, prostitutes and forced labourers.

Sixty million people were either refugees or forcibly displaced in 2015. In Africa thousands of adults and children are being forced to flee conflict, poverty and persecution and are particularly susceptible to traffickers.

Driven by a desperate need to survive and desire to build a better life, they are particularly vulnerable to both sexual and labour exploitation. 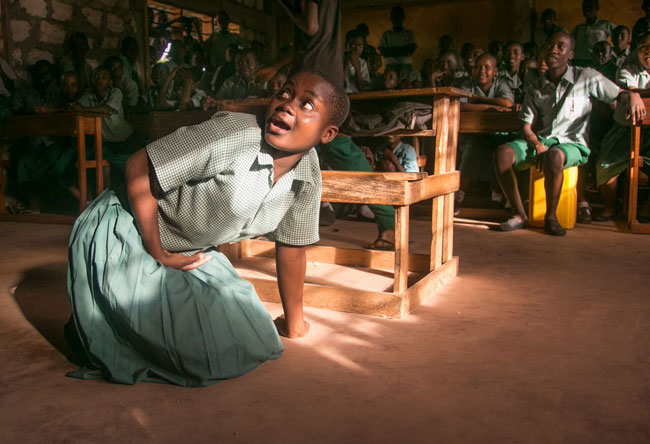 Students at the Karima Primary School Peace club in Kenya participating in a skit about child rights and child protection. Photo by Philip Laubner/CRS

Caritas is part of the COATNET network —Christian Organisations Against Trafficking in Human Beings—which works across borders to raise awareness about trafficking and to assist victims.  COATNET fights the root causes of trafficking, such as poverty and lack of opportunity, while pressing for laws to protect victims, punish perpetrators and secure decent working conditions.

Caritas Internationalis (within the framework of its network against trafficking COATNET) and the Pontifical Council of Pastoral Care for Migrants and Itinerant People, are co-organising an international conference, hosted by Caritas Nigeria. from September 5 -7 in Abuja, Nigeria to raise awareness, give hope and combat human trafficking in Africa.

The conference will provide an opportunity to promote dialogue and cooperation between key stakeholders such as Faith Based Organisations International and regional organisations, law enforcement and other NGOs , share practices on cooperation and challenges and identify common strategies for prevention regarding:

Cardinal Luis Antonio Tagle, the president of Caritas, , Mons. Robinson Wijesinghe, Director of Office, the Pontifical Council for the Pastoral Care of Migrants and Itinerant People from PCMI, and high level representatives of the Catholic Church in Nigeria will join representatives from the Nigerian Government and the African Union,  the Former Special Rapporteur on Trafficking in Humans (OHCHR), the Sultan of Sokoto, the first Independent Anti-Slavery Commissioner of UK, the Pontifical Academy of Social Sciences, representatives of international organizations and others to highlight this urgent problem.

Caritas is currently working on trafficking projects in Nigeria, Ivory Coast, Uganda, Zimbabwe and Mali with plans for another project in Senegal. The conference intends to create stronger links between concerned parties, promote joint actions and share best practices of combating trafficking and slavery while offering assistance and giving hope to victims, as well as advocating for the  implementation  of anti-trafficking conventions and legislations in order to speak out with one voice against human trafficking in Africa.