Global day of prayer for Syria with Pope Francis in Sweden

Caritas organisations around the globe took part in prayer for Syria events 31 October with Pope Francis taking part in an ecumenical event in Sweden. “Each day the news tells us about the unspeakable suffering caused by the Syrian conflict,” said the pope to 10,000 people gathered at an arena in Malmö.

“In the midst of so much devastation, it is truly heroic that men and women have remained there in order to offer material and spiritual assistance,” he said. “Every one of them is in our hearts and prayers.”

Pope Francis is a supporter of the Caritas Syria: Peace is Possible Campaign. “Let us implore the grace of heartfelt conversion for those responsible for the fate of that region,” he said. 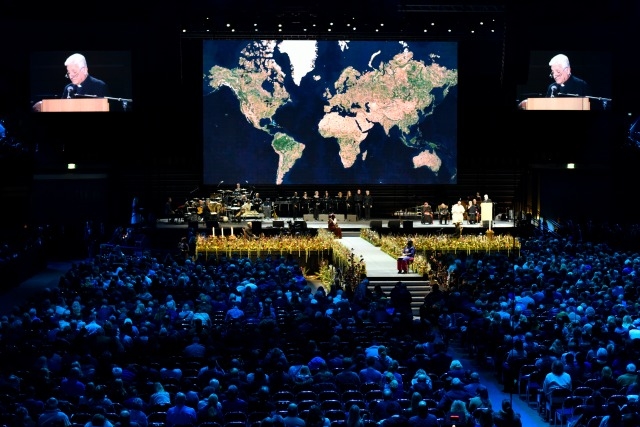 Caritas Syria president, Bishop Antoine Audo of Aleppo also addressed the Malmo audience. “The war we are living through every day in Syria, Iraq and the Middle East makes us witnesses of the destruction of our common house and the death of innocent people and the poorest,” said the Chaldean prelate.

After half a decade of war in Syria, millions have lost their homes while hundreds of thousands have been killed. A third of hospitals have been destroyed. There are 3 million Syrian children out of school. “The physical and moral deterioration can be read in every face – it reaches everyone especially the poorest,” said Bishop Audo.

“Don’t leave our beloved Syria to be destroyed and fragmented,” he said. The bishop called on Christians and Muslims to work together in “seeking dignity, solidarity and the common good”. He said, “The construction of peace and listening to the poorest must become the daily bread of humanity and divine inspiration for all religions and beliefs.”

Cry for peace in Syria

At the same time in Syria Christians from different communities gathered in the Patriarchate of the Greek Catholics in the old city of Damascus for a “Cry for Peace”, organised by Caritas. More than 2500 people attended this event, including Archbishop Mario Zenari, the papal nuncio, bishops of different Christian communities, priests, nuns, different Syrian charities and scout groups. 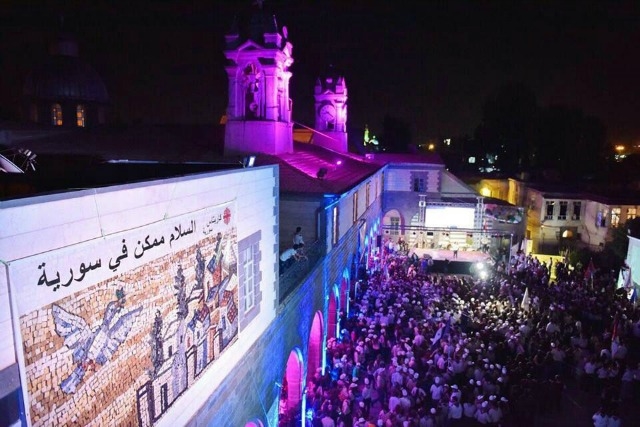 It was the first time that Christians pray all together from different communities. Remon Koury, the scout leader of St. Ephraim Scout Group, said, “What is more important is that it made us feel that the Christians of Syria are unified with their churches and are still attached to their beloved country.”

“This was an amazing moment,” said Majd Shiha, a scout leader from the Vine of Good Shepherd Scout Group. “We sent a message to the whole world showing them who we are and what we can do. Usually the media doesn’t show this face of the Syrian people, who are creative, attached to life in their own country, insisting on living in happiness despite all the difficulties, and able to spread love, joy and peace all around.” 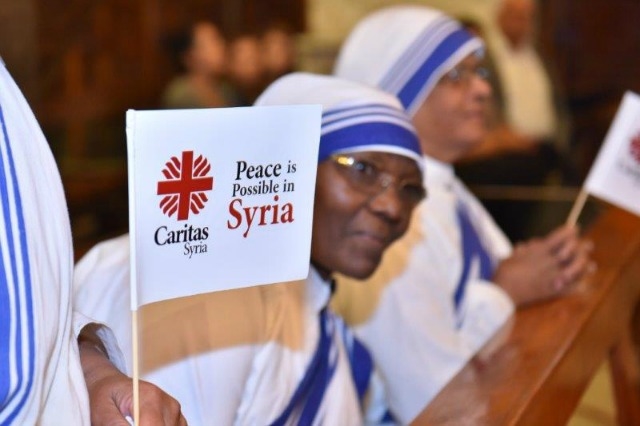 Mrs. Rita Jarallah, who was the responsible for organising this event from Caritas Syria said: “During this event, we felt that our campaign title for peace in Syria is becoming true. We actually lived it for two hours and half with big joy and hope in our hearts: Peace is really Possible in Syria.”

In Sweden, the pope was taking part in the historic Joint Catholic-Lutheran Commemoration of the Reformation alongside Lutheran World Federation (LWF) President Bishop Dr Munib A. Younan and LWF General Secretary Rev. Dr Martin Junge, and leaders from Church of Sweden and the Catholic Diocese of Stockholm.

The Lutheran World Federation’s World Service and Caritas Internationalis signed a Declaration of Intent during the ceremony, mutually committing the organisations to closer cooperation in humanitarian response and sustainable development. LWF World Service Director Maria Immonen and Caritas Internationalis Secretary General Michel Roy signed the declaration as a symbol of the shared commitment to expand joint work at all levels. 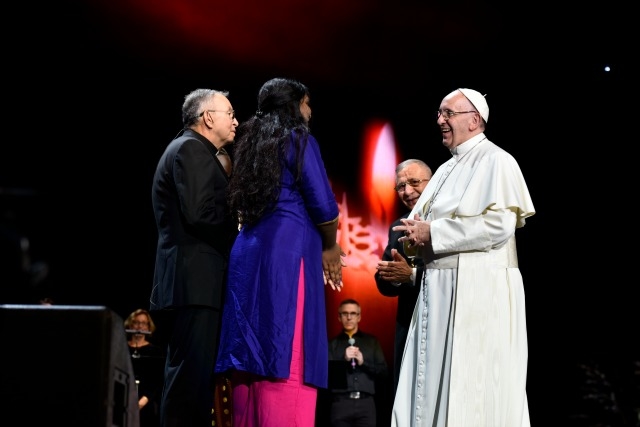 “We decide to join hands in order to bring hope, witness and act together, without being exclusive. And to invite our members to engage with their counterparts and friends locally,” said Michel Roy. Maria Immonen described the signing as “a new beginning of increased joint action among our communities, families and our organisations.”

Pope Francis said the agreement strengthened “a spirit of cooperation for the promotion of human dignity and social justice.” He said that in a world torn by wars and conflicts, Caritas and the Lutheran World Service continue to be “a luminous example of commitment and service to neighbour.”

Activities at the arena also included testimonies of Catholic and Lutheran social justice activists from Burundi, Colombia, India, and South Sudan. In Colombia, LWF and Caritas have been working together since 2009 initiating interethnic dialogue and promoting local peace initiatives. “We have been able to join forces with the Lutheran World Federation, to respond to the cry of the communities in need of protection,” said Msgr Hecor Fabio Henao, Caritas Colombia director and one of the speakers.