His visit comes amid an exodus of more than 620,000 people from Myanmar’s Rakhine State to Bangladesh after a military crackdown against the ethnic Rohingya minority.

“[Myanmar’s] greatest treasure is its people, who have suffered greatly, and continue to suffer, from civil conflict and hostilities that have lasted all too long and created deep divisions,” said Pope Francis. “The healing of those wounds must be a paramount political and spiritual priority.”

As well as Rakhine, there have been a series of major ethnic hostilities across Myanmar in Kayah, Kayin, Shan and Kachin. These internal conflicts has been labelled together as the world’s longest running civil war. 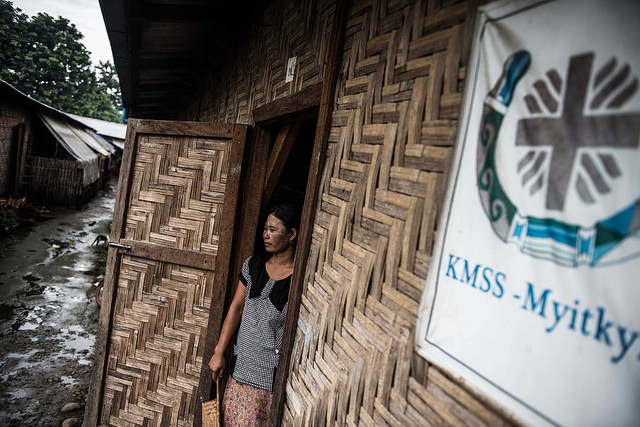 Palana Camp in Kachin is supported by Caritas with humanitarian assistance including food, household items, clean water and medicine. Photo by Tommy Trenchard/Caritas

“Our house was burned down,” says Hkawn Ra, a 43 years old widow living in Palana Camp in Myitkyina in Kachin State. “All our property was torched by the military. The only building left standing in the village was the Church.”

Fighting between the government army and Kachin fighters had caused a 100,000 people to flee their villages after a ceasefire broke down in 2011. “We fled to the jungle. There was no shelter, only what we could build from bamboo,” says Hkawn. “My eldest daughter, Theresa, got sick and died of exposure. She was 22.”

Hkawn and her surviving family members arrived in Palana Camp after 12 months in the jungle. “When we first arrived in the camp, we felt safe and looked after by Caritas,” she said.

Palana is on Church property. Caritas has been able to provide humanitarian assistance including food, household items, clean water and medicine here and in several other camps. 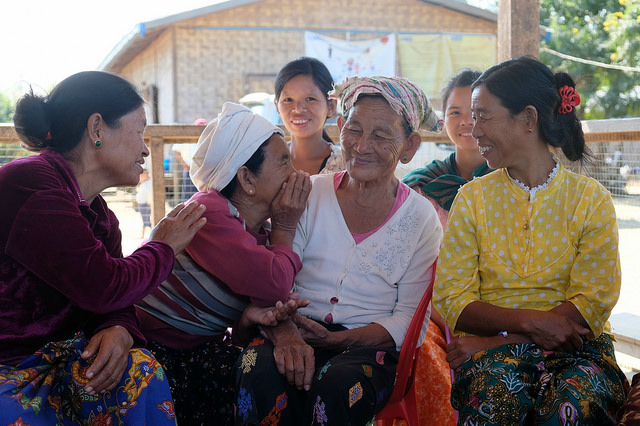 In nearby St Joseph’s, Camp Manager Patrick Khun Seng says that basic needs are covered, but after 6 years resources are reducing. “There is a lack of jobs. These people are hill farmers. They don’t have the skills demanded here,” he says. “Because of the lack of work, there is a lack of money to pay for education. Jobs and schools are the two big gaps.”

Karuna Mission Social Solidarity (KMSS is the local name for Caritas Myanmar) is the largest local aid agency in the country in terms of coverage, working in 2000 villages. There are around 700 staff working on 170 projects. As well as providing aid, Caritas and the Church are promoting peace.

“In Kachin, the displaced people have been living in 10 by 15 feet shelters for over half a decade. They get the basic rations, but there is no education, there is no health,” said Win Tun Kyi, director of KMSS. “If you stay like this, then you lose your identity. They need to be able to go back home to re-establish their lives,” he said.

Bishop Francis Daw Tang of Myitkyina says, “Without peace we can’t do anything. With negotiations, we can slowly lift the burden for the people. The military exploit the resources. While they are present, there can be no security. We hope Pope Francis can convince the military to be part of peace negotiations.”

Hkawn Ra and her son are among the pilgrims to make the trip to see Pope Francis in Yangon. “I’m going to see Pope Francis,” she said. “I hopes his visit will bring peace and that the people of the camps will be able to return to their villages.”