Nining was about to start a work shift at a water spinach farm on Indonesia’s Sulawesi island when a 7.5 magnitude earthquake hit. The 25-year-old had picked up some fertiliser and was approaching a field when the effects of the quake erupted around her.

“The house by the field collapsed,” Nining said. “The earth shook very hard. I couldn’t stand up straight.”

Her thoughts turned immediately to her children and she raced home fearing what she might find.“I left my scooter on the side of the road and ran home immediately,” recalled Nining. “It was too dangerous to ride a scooter.”

The 28 September earthquake devastated her area with rivers of soil. The quake also generated a tsunami that killed at least 2,096 people and seriously injured over 10,000.

Across affected parts of Sulawesi shops, homes, mosques and hotels collapsed and were swept away or suffered extensive damage. At least 67,000 houses were damaged or destroyed.

Nining was among the luckier ones. She discovered that, though the ground near her house had cracked open and mud overwhelmed her yard, her husband Yulius, 30, and her mother-in-law had taken their two daughters Tiwi, 7, and Tiara, 3, to higher ground.  Their home was more or less intact.

A crowd of other local people also headed for that section of higher ground, a large field.

“Ten families were there,” said Nining. “We were hungry because we hadn’t had our dinner yet. Some people who lived nearby were kind enough to share their bananas with us.”

The field became a place of refuge in the days of chaos that followed the quake, with it soon transforming into an ad hoc camp.

“We would go back to our houses to look for food. We found instant noodles and rice and we shared it among us,” added Nining. “A week later, we received the first food distribution.”

However, Nining is among two million survivors who continue to suffer from the earthquake’s devastating effects.

More than 87,000 people are living in evacuation centres or informal camps, with many more staying with relatives or friends.

Many of her neighbours in the camp have left the field. Nining’s family had to stay longer in the informal camp. One of their children is too traumatised to return home. Their means to make a living are also still in tatters.

“I want to go home. My youngest child Tiara is still scared. Whenever we visit home, she always says, ‘let’s go back to our house on the hill,’ referring to this shelter,” she said.

Her husband, Yulius, has become the sole breadwinner of the family.

“He still has some pigs left after the earthquake,” Nining said. “My husband used to have 10 pigs, but some ran off and others died.”

Caritas has procured essential food, drinking water and household items for 6,000 families, as well as 9,900 tarpaulins, bedding and distributions are ongoing. It has handed out 2,000 household-and-hygiene kits to affected families.

Sulawesi earthquake and tsunami disaster: How Caritas has helped Indonesia

Caritas has helped Nining. “I received a mosquito net, a jerry can, a bucket, toothpaste, toothbrushes, soap, shampoo, detergent, dishwashing soap, and a water pail,” she said. 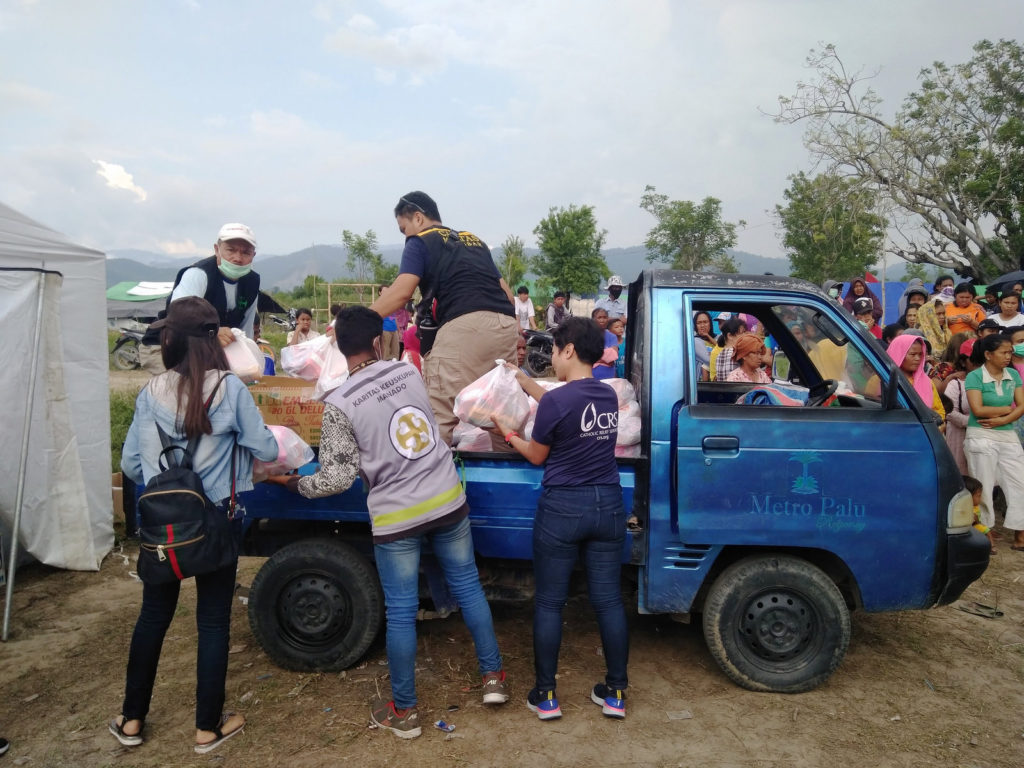 “The mosquito net is very helpful, especially when you have small children like I do,” she added. “There are a lot of flies and mosquitoes here. On a rainy day like today, there will be a lot of mosquitoes in the evening.”

Caritas hopes to assist 4,500 families (18,000 individuals) in the next 8 months through the direct distribution of supplies or through cash assistance allowing people the flexibility to purchase items of greatest need for their families.

Caritas is also providing support for improvement of communities resilience and psycho-social support. Vulnerable individuals in seven communities, including displaced children in camps and schools, will access psychosocial support services or activities.

“I spend most of my time taking care of my children,” said Nining. “The other day I passed the field where I used to work and there was a lot of weeds already, but my employer hasn’t contacted me. My scooter was still there.”

Nining is trying to make the best of her current living conditions. She said: “I just want my kids to be healthy.”