Church in Vietnam and its response to HIV and AIDS 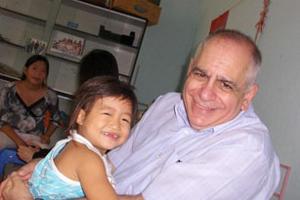 While the epidemics in Cambodia, Myanmar and Thailand all show declines in HIV prevalence, those in Vietnam and Indonesia (especially the Papua province) are growing.

By 2006, an estimated one-third of Vietnamese people living with HIV were women.

In Janary 2008, two staff members of Caritas Internationalis (CI), Rev. Msgr. Robert J. Vitillo and Ms. Francesca Merico, both based at the CI Delegation in Geneva, travelled to Vietnam to offer updates to Church workers already engaged in HIV education, care, support and treatment services there and to assist others to consider such programming.

In Asia, national HIV prevalence (or level of infection in the population) is highest in South-East Asia. Although the number of people living with HIV in India is estimated to be lower than that originally projected, the epidemic there continues to affect large numbers of people.

The Church in Vietnam already sponsors numerous education and care services for HIV-positive persons and others who might be vulnerable to infection in the Archdioceses of Ho Chi Minh City and Hue; these programmes include hospice care, home-based care, outpatient clinics and inpatient care in a government-run drug rehabilitation centre.

Msgr. Vitillo offered Church workers in these two archdioceses both medical and scientific updates as well as “best practice experience” models, in other countries, of Church actions to decrease stigma and discrimination toward those living with or affected by HIV.

In these same workshops, Ms. Merico focused on the special needs of children living with the infection and suggested ways to advocate for greater access to anti-retroviral medications, adapted for use in children, and to promote better use of simple, cost-effective medications to prevent mother-to-child transmission by HIV-positive women.

In Hue, Msgr. Vitillo facilitated seminars for more than 100 seminarians and 200 religious sisters in formation and encouraged them to include attention to HIV issues in their ongoing pastoral work.

In Hanoi, these CI staff members joined other international guests for a national seminar to plan a more vigorous response to HIV by the Church in Vietnam. Participants from 13 dioceses, including 3 bishops, 20 priests, 20 religious sisters and 15 laypersons participated in the seminar. The seminar was supported by Caritas Germany, Misereor and Catholic Relief Services.