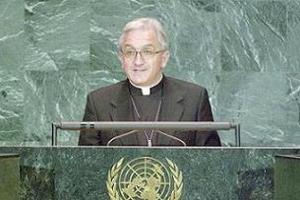 “At the halfway point, while much has been done towards achieving the goals, abject poverty, hunger, illiteracy and lack of even the most basic healthcare are still rampant, indeed worsening in some regions,” said Archbishop Celestino Migliore, permanent observer of the Holy See to the United Nations, in an address delivered to the 62nd session of the U.N. General Assembly, 4 April 2008.

His statement was given during the debate on “Recognising the Achievements, Addressing the Challenges and Getting Back on Track to Achieve the MDGs by 2015.”

“Authoritative studies tell us that in spite of the remarkable economic growth in many developing countries, the overall goal of reducing hunger and poverty has remained elusive, said the Archbishop.

“My delegation believes that greater international solidarity is necessary if we are to succeed in narrowing the ever-increasing gap between rich and poor countries and between individuals within countries,” he said. “The combined efforts to meet the 0.7 percent of ODA and to review trade and financing mechanisms on the one hand, and to end bad governance and internecine conflicts in recipient States on the other, will go a long way in lifting millions out of extreme poverty and hunger.”

Education
“Education underpins all the MDGs,” he said “It is the most effective tool to empower men and women to achieve greater social, economic and political freedom.

“Precisely with this end in view, thousands of educational institutions of the Catholic Church are located in degraded inner cities and in far-flung villages, in the peripheries of huge cities and in places where children are constrained to work to survive.”

Health
The Archbishop said, “While progress has been made in reducing child mortality, there has been slower progress in addressing maternal health and HIV/AIDS, malaria and tuberculosis. The overriding cause of the slow progress has been the lack of resources at the most basic levels of healthcare and the continued lack of access to even basic health services.

“Moreover, the lack of progress on the health-related goals demonstrates the interconnected and mutually reinforcing nature of the MDGs. The significant correlation between poverty and the persistent high levels of HIV/AIDS, tuberculosis, malaria and maternal mortality is evident.”