Pacific islanders face end of a way of life 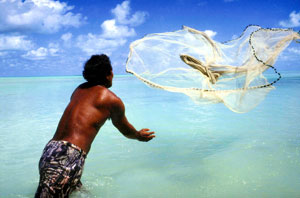 With a strong worldwide presence in emergency relief and development, climate change represents a major threat to the work carried out by many Caritas organisations.
Credits: Caritas

Anote Tong is the President of the South Pacific island of Kiribati, where rising sea levels could force the 90,000 population to move elsewhere in 50 years. On a visit to New Zealand in 2008, he spoke about the reality of climate change for his nation and the need to prepare to relocate his people to another country.

He described how very high tides now occur regularly, resulting in erosion and aquifer contamination. He also spoke about how painful it is to plan for the day when his people will no longer have a country, but how necessary it is to do this planning.

Many people in Oceania are living with changes in their environment which harm their way of life and impede their development. Scientific evidence of climate change is vital in determining what is happening to our world, but the stories of the people living on small islands provide the human dimension to climate change.

There are many stories from people in the Pacific about the flooding and erosion of their coastal land as a result of storm and tidal surges which have been occurring more often and with greater intensity than in the past. As well as reducing the usable land, these surges contaminate aquifers on coral islands which already have a very precarious water supply. Because the islands are so low-lying, Pacific people fear the effects of sea level rise, and believe it is already contributing to erosion of land in some countries.

El Nino weather patterns are part of life for all people in Pacific countries and they have become more frequent in the last thirty years. These weather patterns shift rainfall distribution in the Pacific, resulting in serious and lengthy drought in some countries, and excessive rainfall in others. El Nino events are associated with water shortages in the drought-prone countries, and an increased risk of tropical cyclones of higher intensity.

Small islands have limited natural resources, and in some cases limited land area for their population, which makes them very vulnerable to extreme weather events. They also have very limited options for adaptation to a changing climate. This is why some island states, such as Kiribati, are talking openly about preparing their populations for re-location to other countries, such as New Zealand.

For the members of Caritas Oceania climate change has always been a matter of justice. The small island states contribute only a minute fraction of the atmospheric gases which accelerate global warming, but these states will be some of the most severely affected. It is very important to Caritas that their voices are heard as decisions are made about climate change on the global level.