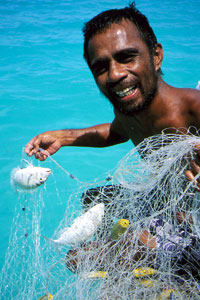 The islands of Kiribati are sinking into the sea and the people will have to find new homes.
Credits: Mathias Heng/Caritas Australia

For local residents of Kiribati like Ioanne, Christmas Day means putting some fish on the fire and sitting down with the family for a feast. Kiribati is an island nation in the Pacific Ocean that includes among its 33 atolls Christmas Island.

Ioanne has been celebrating Christmas on the same plot of land for 50 years. His parents were there before that. But Kiribati does not have many Christmases left. The islands are sinking into the sea and the people will have to find new homes.

“I could remember that in the late 1960s and early 1970s, this plot of land was much bigger than what you see today, said Ioanne, “Probably 40 meters in length, and now it is only about 10 meters left.”

Erosion has reduced the size of his land and now the sea is only one metre away from his house. A seawall has failed to stop the flooding of Ioanne’s home, so they’ve built their remaining rooms on stilts.

Sea levels in Kiribati have averaged a rise of 3.7 millimetres a year since 1992 (Australian National Tidal centre). With sea levels rising and most of Kiribati only two meters high, the end is in sight for the 98,000 residents.

Kiribati’s capital Tarawa is home to nearly half the population. According to the World Bank, 25-54 percent in the south and 55-80 percent in the North will be under water by 2050 unless measures are taken. The government says that all that can be done is too relocate. “I would rather join my ancestors buried in this land, said Ioanne, “I love Kiribati, and I love the land of my fore-fathers. I don’t want to be separated with my children.”

Relentless erosion has been linked to climate change, and the residents of Kiribati (the i-Kiribati) see the connection. Kiribati is a member of the Alliance of Small Island States that has been urging world leaders for a deal at the Copenhagen climate summit in December that includes a cut in emissions of at least 45 per cent below 1990 levels by 2020 to limit global warming to no more than 1.5 degrees above pre-industrial levels.

In place of a deal, Kiribati will also need funds to help its people deal with the consequences of raising sea levels. It is one of the world’s poorest nations and only a fifth of adults have work. Neither Ioanne or his wife Teitibwebwe has work, but rely on subsistence fishing.

People will need billions of dollars to help relocate. One of the tasks at Copenhagen will be for rich countries that have done much to cause climate change to pick up the bill.

Ioanne has a message for world leaders at Copenhagen. “We are sinking, stop killing us. We trust you and we love you.”