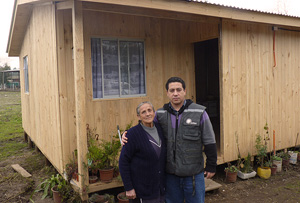 Temporary shelter in Maule provide by Caritas for survivors of the February earthquake.
Credits: Caritas Chile

Chile is getting back on its feet six months after the 27 February earthquake left millions without homes and in need of aid. Caritas responded immediately, providing food, shelter, warm clothing and compassion, reaching over a million people.

Now Caritas is switching to reconstruction and rehabilitation. But Lorenzo Figueroa, Secretary General of Caritas Chile, says there is an urgent need for a national plan from the government as winter approaches.

What have been the greatest challenges?

The earthquake affected a massive area, from Valparaíso to Araucania, in which almost 13 million people live. Over two million people were directly affected. It was difficult to assess the impact and identify the victims. Coupled with this, information wasn’t coming through from the government.

Our teams were already on the ground from the very beginning of the disaster. We have a network of 250 parishes and 1500 churches which made reaching people early on much easier.

An ongoing challenge is how to make sure the world doesn’t forget about the victims of the earthquake and how to ensure continuing solidarity and hope for all these families.

How are people getting along six months after the disaster?

Six months after the earthquake and tsunami, the situation is still one of devastation and people still need a lot of help.

In the south there are still many aftershocks, some mild, some stronger. Even though people have returned to normality, they live with the fear of another earthquake. In the north, people are feeling more and more afraid when there is an aftershock as experts have predicted a big earthquake there.

Caritas is very concerned about the effect of the winter on the people made homeless by the earthquake. Around 40,000 temporary houses have been built. It’s cold, there’s rain, wind and snow, and for thousands of families living in such conditions and relying on aid, they have to put up with leaks and collapsing roofs and difficult living conditions.

People living in camps face inadequate hygiene conditions. Also, damage to hospitals means that people don’t always get the treatment they need if they do fall ill.

What is Caritas Chile doing to help people now?

A part of our work is supporting families in some sort of economic activity, or enabling them to buy tools or materials that they lost in the earthquake but which they need to do their job. We’re currently trying to help families so they become more independent. The challenge in this is to tailor our programmes so they respond to the specific needs of individual communities.

How important was the support of the Caritas network following the Chile earthquake?

Caritas Internationalis gave an enormous amount of solidarity in many different ways such as with staff, funding, technical assistance, helping get aid in from other countries and in many other ways. But more than this, it helped us not to feel alone in our efforts. The Caritas family was there for us and ready to give us help.

In the first week following the earthquake, Caritas representatives visited us and helped us in our work on the ground. With their help, we presented an emergency appeal for € 9.364.667 ($ 6.555.267.039) in March. That money gave a big boost to our programmes immediately following the emergency and now that we’re in the rehabilitation phase.The work that we did, that brought help and hope to thousands of families wouldn’t have been possible without the Caritas family.

What important lessons did it learn through this experience?

The main things we learned as a result of the earthquake was the need to strengthen Caritas teams on the ground and at national and diocesan level to make them more efficient and effective, the importance of local community involvement, the need for prevention programmes, the value of volunteers, the importance of effective fundraising, and that the marginalisation of vulnerable people in disasters should be tackled and dignity promoted.

Are there any positive signs for the future?

It is the people affected by the earthquake themselves who are offering positive signs. Despite their loss and pain, they have managed to get back on their feet and mend their houses and go back to work. We hope for a better tomorrow and for faith and gratitude to the Lord for the gift of life. The Chilean people have shown that they can rise above adversity. And the swell of solidarity which has been shown through the work of numerous volunteers and also by massive generosity from both home and abroad is another sign of hope.