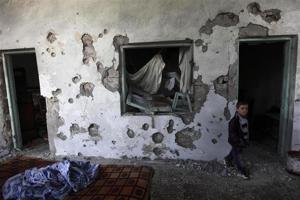 A child walks in a house damaged after heavy shelling by government forces in Sermeen near the northern city of Idlib February 28, 2012.
Credits: REUTERS/Zohra Bensemra courtesy of alertnet.org

Caritas Lebanon is aiding Syrian refugee families who have arrived in Lebanon throughout the past few months.

A team from the Caritas Lebanon organised a two-day fact finding mission to the north-east of Lebanon in February.

The team included staff from the Caritas Lebanon Migrant Centre and Caritas Baalbeck.

Across the border with Syria in the Bekaa valley, two villages Qaa and Jdeide are currently hosting twelve Christian Syrian families from Homs and Rable.

All of the refugees escaped Syria and arrived from five months to one week ago. They said Caritas was the first NGO to visit them. They did not plan to flee into Lebanon. But because their homes were shelled or because one of their relatives or friends were killed, they got scared and escaped as soon as they could.

As a result, most of them came with nothing except the clothes they were wearing at the time.

Now, they have found refuge but lack everything: income to pay rent, electricity bills, food, clothes, hygiene products, and most important in the extremely low winter temperatures oil fuel.

The extensive generosity of the local population, dedicated to support them, is not sufficient to meet the existing and growing needs.

In Baalbek, Caritas was approached by a representative of an official committee dealing with religious authorities to seek assistance for the 120 Syrian Sunni families.

In this medium-sized city, members of the Sunni community and NGOs have also offered primary assistance to accommodate the new-coming families.

Throughout February only, 10 families arrived weekly, all of them including children. This average figure is likely to remain stable as long as violence continues in Syria.

Most of the families fled to protect their children, especially women, and babies from any abuse. These numerous children are even more vulnerable and have other specific needs: milk, underwear, warm clothes and protein-loaded food.

School-aged children were able to register in state schools, free of any charge. However, Syrian children face difficulty following the Lebanese education system since French is included in the programme. In the future, they will probably need remedial classes.

Thanks to its volunteers from the region, Caritas could reach out to 240 Sunni and 12 Christian Syrian families having sought refuge in Aarsalm Qaa, Jdeide and Baalbeck.

The number of new-coming Syrian families is unpredictable, it is very likely the more the violence will increase in Syria, the more number of Syrian refugees will increase in Lebanon. Most refugees fear Syria will follow the Iraqi scenario based on a sectarian division of society, opening the door to a potential civil war.

In Lebanon, Syrian families do not fear violence anymore. For now, despite their uncertain future, they focus on ensuring their day-to-day needs and children’s ones.

Caritas Lebanon Migrant Center is currently striving to rally support for them and increase its presence in the Bekaa region with accredited social workers.