Crisis in South Sudan and Sudan 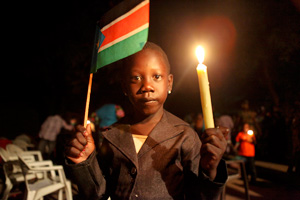 People in Sudan and South Sudan face a humanitarian crisis if the two countries continue along the path to war.

Months of clashes have intensified in recent weeks bringing the two civil war adversaries close to all out conflict.

Caritas says that only peaceful negotiation between the two sides can resolve their disputes, while a return to fighting will mean everyone loses.

The stakes are high.

Two million people were killed and four million forced from their homes in the decades long war that ended in 2005 with the Comprehensive Peace Agreement that led to South Sudan becoming independent in 2011.

Both countries but especially South Sudan have very poor medical services, shortages of food are a constant preoccupation for the people and infrastructure is weak.

There are fears that the 500,000 South Sudanese currently living in Sudan will flee south, sparking a huge refugee crisis.

War is not inevitable.

Both sides can still resolve their differences over border demarcation, the status of disputed areas in Abyei, South Kordofan and Blue Nile and oil rights under the terms of the Comprehensive Peace Agreement.

Tensions between Sudan and South Sudan could be defused if the United Nations and the African Union would mediate the differences and attempt to determine the proper border between the two countries.

Christian Churches including the Catholic Church have been advocates for peace in Sudan and South Sudan.

At Easter, Archbishop Paolino Loro Lukudo of Juba, South Sudan, called for an end to the border fighting, saying violence does not meld with God’s intention of peace for all people as promised by Christ’s resurrection.

Caritas was part of a global prayer campaign leading up to the referendum and declaration of independence for South Sudan and is urging its supporter to continue praying for peace.

As Pope Benedict XVI said during his Easter message, “…May the risen Jesus comfort the suffering populations of the Horn of Africa and favour their reconciliation; may he help the Great Lakes Region, Sudan and South Sudan, and grant their inhabitants the power of forgiveness…”