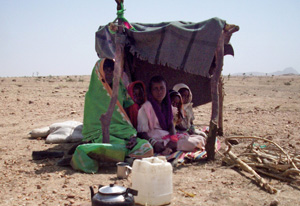 In January 2013, violence in Darfur caused many people to flee their homes. Some have settled in barren areas outside the town of Zalingei.
Credits: NCA staff

Eight months pregnant and carrying a child on her back, Miriam Ibrahim urged her other two children on: ‘“Walk quickly.” For three days, the family had no food as they trekked across the hot, sandy dirt of western Sudan, encountering snakes and wild animals. They slept under trees. The ground burned and there were thorns; Miriam had no shoes. And she didn’t know exactly where to go: “There was no road.”

Some passing nomads saw the bedraggled family and gave them a small plastic container for water. The family also found food over the next week.

But it took ten days of walking before they reached a camp for other people who fled shooting and violence. There they found relatives, one of whom offered Miriam flip-flops . One of the first things Miriam did after arriving was slather her raw feet with mud.

Ten years after violence broke out in Darfur, there’s no happy ending for families like Miriam’s. There’s no ending at all. The attack on her home happened not in 2003, but in January 2013.

Thousands of people dubbed “new arrivals” straggle into the camps as the years go by. Most are farmers: Miriam and her family grew okra, onions, guava, and sorghum. Unable to leave the camps unless they’re willing to face the same dangers they fled, the residents have few ways to earn money.

With support from ACT Alliance and Caritas, Norwegian Church Aid (NCA) is helping camp residents, whether they’ve been there for 10 years or one week. NCA has built water systems that serve over 300,000 needy people. Women like Miriam don’t need to leave the safety of the camp to get water.

ACT-Caritas funds primary-care clinics in the camps, making sure pregnant women like Miriam get crucial antenatal care. Miriam also took her youngest child, Sawakin, to a free NCA clinic after their arduous journey: “We don’t have money. So we went to the Hamedia clinic,” she says. “The doctor told me what to do about my daughter’s cough.”

NCA trains women in the camp to deliver babies safely either at the clinic or in their houses. NCA also provides free “clean delivery kits” with items like a sterile razor blade and cloth if women choose to give birth at home. “When it is time for the baby to come, I will call the local midwife,” says Miriam.

NCA’s lifesaving programmes ensure that Miriam and her children have the basics they need to survive. Beyond that, though, her future—like many Darfuris—is murky. Caught in limbo, the new arrivals and the long-term camp residents are hoping for a change they have no control over. “I don’t know what will happen,” says Miriam. “What can I do? I cannot do anything.”