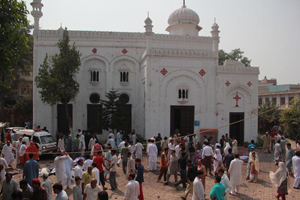 Two suicide bombers struck a historic church in the Pakistani city of Peshawar on Sunday, killing 81 people attending Mass. It was one of the deadliest attacks on Christians in Pakistan’s history.

The bomb blasts left a scene of devastation. Around 600 people were inside the church at the time. Police say 12 kg of explosives were used in the attacks, carried out while worshippers were leaving Mass. 145 people were wounded in the attack. Among the dead and injured were women and children.

It is the latest in a series of attacks on Pakistani Christians, who represent about 1.6 percent of the country’s largely Muslim population. They tend to keep a low profile, and while attacks on Christian areas occur sporadically, Sunday’s bombings were among the deadliest in recent history.

The tragedy has sparked nationwide protests.

More than 500 gathered today in front of the Punjab Assembly, where they raised slogans against attackers, prayed for peace and demanded justice. They included priests, staff of the Justice and Peace Commission, religious superiors, as well as Caritas Pakistan staff.

Caritas Pakistan’s Director Amjad Gulzar was among the protesters. He said “Religious minorities need more protection than other groups. We are all Pakistanis and have contributed greatly in the field of education, health and humanitarian works. The government should do more for peace”.

Caritas Pakistan Chairman Archbishop Joseph Coutts of Karachi condemned the terrorist attack. “I demand the government protects religious minorities and takes steps to avoid similar incidents,” he said. “Our educational institutes will remain closed as a sign of mourning and protest. I urge all Christians to remain peaceful and pray”.

Amjad Gulzar will pay a solidarity visit to Peshawar and Caritas Pakistan will continue to take part in peace rallies.

All Saints Church was built in 1883, inspired by the structures of the mosques. It is facing Mecca. It’s well known for its attempt to promote peace, harmony and peaceful co-existence between the Muslim majority and the Christian minority in Pakistan.

For more information please contact Patrick Nicholson on +39 06 6987 9725 or by e-mail at nicholson@caritas.va.