Bossangoa: a symbol of pain and suffering in Central African Republic 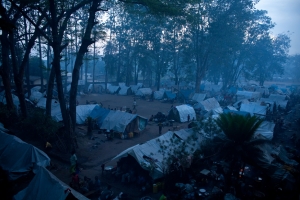 I have met people sheltering for their lives from genocide in Yugoslavia, super-cyclones in Myanmar and tyranny in Zimbabwe. But I have never seen anything to compare with the Catholic mission compound in Bossangoa in the north of the Central African Republic. Nowhere else has the sense entrapment and despair been quite so intense.

The small compound of 41,000 people crammed together is a fragile haven of safety in a land gripped by terror. Outside the walls are the fighters of Seleka, a mix of foreign and local armed men who have brought anarchy to the Central African Republic since overthrowing the government in March 2013. The only protection for the Catholic mission is a contingent of African regional peacekeepers.

The silence and lack of movement in the mission strikes you immediately. It’s packed with people but everywhere you look they’re lying down, motionless. As we climbed out of the car at the bishop’s house, the parking lot was packed with people lying between vehicles on the dirt without blankets or shelter. It was no different inside. Acrid smoke from wood fires fills the air, hallways are crowded with people, lying side by side, as they settled in for a long uncomfortable night.

Few people have heard of Bossangoa. The town is 350 km north of the capital of the Central African Republic. It used to be a buzzing centre full of life and colour. Now it’s virtually empty. Fighting between Seleka and newly former self-defence militias forced everyone to flee. Hundreds more people arrive everyday at the Catholic mission.

To reach my room within the compound, one must zigzag through a maze of makeshift shelters and along dark corridors choked with people. It takes 20 minutes to pick through a single room, with each step carefully avoiding arms, legs and fingers hidden under blankets.

I was lucky of course. I had a bed. I lay in it listening to the constant coughing and the wrenching fits and cries of a small child close by.

After a fitful night, I woke before dawn to a low hum, the sound of prayer in the local language, Sango. In the gentle morning light, the claustrophobia and misery thinned for a moment. 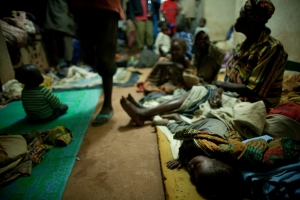 People talked as they cooked breakfast and got on with their daily routines of washing, cleaning and brushing hair. The children were shouting and running. They ran up to me shouting bonyo, which I mistook for bonjour. In fact it means ‘white’ in Sango.

Every space is wedged with people, and still more come. Caritas volunteers fear an epidemic. The lack of food is visible in the children, clearly showing signs of malnutrition. As the heat from the Sun built up, people struggled to find a cooler place.

Walking through the camp, speaking to its resident, I tried to absorb their accounts of torture, death and destruction. One man had just arrived. He had escaped from an attack while he was working in the fields. He had become separated from his wife and their small child. Deeply distressed, he was sitting against a tree at the entrance of the camp, waiting to see if his family would arrive.

A woman with a baby and a toddler told me how her family had hidden in a hole in the ground for hours while Seleka searched the town. She describes her terror at “the sound of gunshots and the fear of being found and shot like rabbits.” They managed to escape to the Catholic mission and have lived here for two months.

“I am lucky,” she said. “My husband is a taxi driver. His car and motorcycle were stolen. Everything we have was taken. At least we are here alive and together and many are not”.

Caritas and the Church have been working hard to provide aid to the compound in Bossangoa, including blankets and food. But the insecurity and disorder makes that very difficult. Needs are acute and growing.

“It hurts me but we have almost nothing to give them,” said a Caritas volunteer. “We can listen to them, talk to them, pray with them and we live here with them and I believe it helps. ” Like many of the volunteers, he was not being paid.

A violent thunderstorm adds to the dark sense of foreboding. Torrential rain for 40 minutes makes life even more unbearable, with fires extinguished and people huddled under what shelter there is available. People fight to keep their belongings dry while torrents of red muddy water invade the camp. “Do you see in what state of misery we are forced to live in,” said a person next to me. 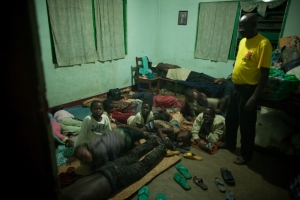 “Action needs to be taken fast before it is too late,” said Bishop Nestor-Désiré Nongo-Aziagbia of Bossangoa.

“We need to give back to the people what they have lost. Their goods, their dignity, and allow them to be free from fear. We need to give them reasons for hope and for walking again with their head up high. We give faith and hope but in the case of Bossangoa, charity has to be shown and fast,” he said.

People are dying every day here. But the mission is only part of the tragedy. Outside they are dying too, in greater numbers, alone in the bush. Bossangoa is the visible symbol of the agony gripping the Central African Republic, what’s happening outside these walls is largely unknown, too terrifying to contemplate.

In Bossangoa, about 2,200 houses have been burned. Along the 100 km of road from Bossambele to Bossangoa, all the villages on either side were either empty or burnt. The only sing of life was a few goats and pigs left to roam.

My mission in the Central African Republic has been to record what is happening here. As I packed to return home, I was struck by a sense of privilege at having met so many courageous people taking risks to raise their voices above the noise of the guns. They’re working to promote peace, reconciliation and dialogue in a time where the country is witnessing the misappropriation of religion for political gain. “We are on the edge of an abyss. How many dead do we need to count so people will no longer be indifferent,” said one leader of a interreligious platform promoting peace.

Bouar , Bouca, Batangafo, Bambari, Bangassou , Berberati , Bria – the outside world is heedless of all those towns beginning with B. But for the people who live in them, their suffering is all too real. They have names – Pisca, Wilfrid, Priscilla, Chancela, François, Celestin – that will stay with me for a long time. I hope one day they will be able to rebuild their shattered lives in peace.