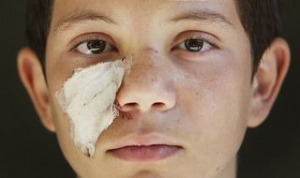 Caritas Internationalis says the ‘Geneva II’ conference offers hope for an end to the fighting in Syria. The international meeting aims to find a political solution to the war. It’s set to begin in Switzerland on 22 January.

“Enough is enough, the tragedy must end in Syria,” said Caritas Internationalis Secretary General Michel Roy. “The time has come for all sides to lay down their weapons. They must find a path to peace through dialogue.”

The war in Syria has affected the entire population of 23 million. 9.3 million people are in need of humanitarian assistance in Syria. More than two million people have fled to the neighbouring countries.

Nearly a quarter of million people inside the country are cut off from aid. Dozens of children, the elderly and others starved to death this year in a makeshift camp in Damascus

“A ceasefire is urgent to end the cycle of violence. An end to the fighting will allow aid agencies to reach people inside Syria cut off from aid,” said Michel Roy.

Donor countries have pledged $2.4 billion so far in aid. The United Nations say $6.5 billion is needed in 2014. Last year, only about 70 percent of the funding for Syria was provided.

“It’s a scandal that there is not enough funds to help the millions of Syrians in need,” said Michel Roy. “It seems safeguarding the arms trade is a thousand times more important than protection of ordinary people.”

Caritas Internationalis members have been providing aid as part of Catholic Church relief efforts to Syrians inside the country and to refugees in Lebanon, Jordan, Iraq, Turkey and Bulgaria.

Caritas members have reached over 320,000 Syrians in the region with aid, such as food, healthcare, protection, education, employment, winter shelter and clothing. Three-quarters are women and children.

Mgr Simon Faddoul, President of Caritas Lebanon, says: “This is the greatest humanitarian disaster of the 21st century, and we urgently need peace – not just for the sake of Syria, but for the sake of neighbouring countries as well.”

Pope Francis expressed his hope last week that “Geneva 2 Conference will mark the beginning of the desired peace process. At the same time, full respect for humanitarian law remains essential. It is unacceptable that unarmed civilians, especially children, become targets.

“I also encourage all parties to promote and ensure in every way possible the provision of urgently-needed aid to much of the population.”

Prayer for peace in Syria

God of mercy,
Pour out your peace upon us all.
Watch over our brothers and sisters in Syria,
especially those who have fled their homes.
Lead them to a place of safety
and bring comfort to those who mourn.
Inspire us all to share the light of your hope,
and to reach out in a spirit of compassion.
Make us channels of your peace,
so all your children may live
free from fear, conflict and pain.
We ask this through Christ our Lord, Prince of Peace, Amen.

Find out what some of our members are saying about Geneva II and the crisis in Syria: CAFOD, Caritas Italy, Caritas Switzerland.